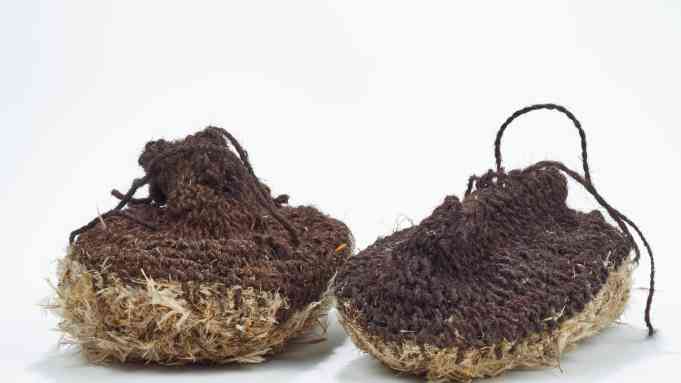 STEP RIGHT UP: How to leave without a trace? Consider a pair of Kurdaitcha shoes, said to be worn by ritual killers among certain indigenous Australians. These delicate, satchel-like shoes boast soles of emu feathers and an upper woven from human hair, and usually don’t last longer than one journey.

They are among 142 pairs of unusual shoes on display at the Musée des Confluences in Lyon, France, a science center and anthropology museum housed in a high-tech building.

“At Your Feet,” which opened this summer and runs until April 30, 2017, unfurls a narrative about the human condition via footwear from the 16th century through to the present day — and across varied geographies, from the elaborate platform sandals Syrians wore in hammams in the 19th century to transparent baby shoes from midcentury France designed to allow frantic parents to see that toes are not crushed inside.

The museum, only open since 2014, restored 49 pairs of shoes for the eclectic showcase, whose oddities include a section devoted to the curious practice of shoe tossing that leaves shoes dangling uselessly from wires and trees.