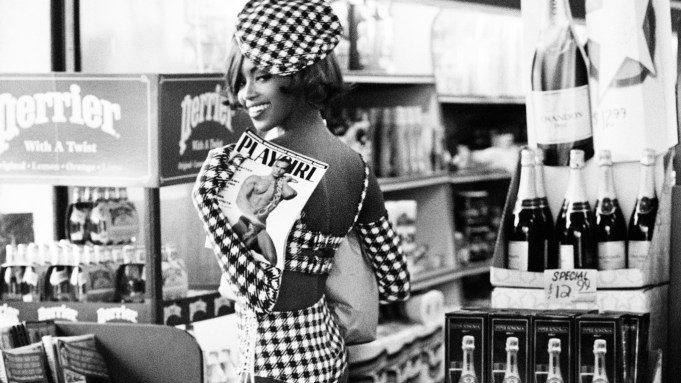 POP CULTURE: Long before high/low fashion collaborations were a thing, Azzedine Alaïa worked with the most popular of Paris retail institutions, Tati, building a collection based on its famous checked motif and creating a capsule for the Barbès landmark, a magnet for bargain hunters for decades.

That collaboration — and Alaïa’s spring 1991 collection built around it — is the subject of the latest exhibition staged at the Azzedine Alaïa Association, opening to the public Monday.

“Today, everyone talks about collaboration and co-branding, but Azzedine was the first to initiate a partnership between a mass-market retailer — and it really was mass-market. Tati at the time was quite rough, it was like a sociological study in clothing,” explained Olivier Saillard, director of the “Azzedine Alaïa, Another Way to Look at Fashion: The Tati Collection” exhibition, which runs through Jan. 5.

“Azzedine, at the time when he went to Tunis, had this strong memory of people arriving from France with giant pink gingham Tati bags filled to bursting. The owner of Tati at the time was also a fellow Tunisian,” Saillard explained at the exhibition opening event on Sunday.

As well as the check pieces in black, blue or red and white, which made up about half of the spring 1991 collection — some of them actually made from Tati canvas, others reproducing the motif on cotton or knits — the exhibition features artworks by Julian Schnabel, a close friend of Alaïa’s who was the original inspiration behind the collection.

“Schnabel was the first to paint on Tati canvas, and that was what inspired Azzedine to create this collection. They were very close friends, and very early on in their friendship, Schnabel suggested to Azzedine that they should swap their creations. Azzedine would give him dresses in exchange for paintings. It was probably a great return on investment,” Saillard joked.

“And then Jacqueline Beaurang, Schnabel’s first wife, opened an Alaïa boutique in New York, and after they divorced, Schnabel took back all the store fittings, which he had designed, and they are still in the Alaïa boutique today.”

The capsule collection designed for Tati — a pair of espadrilles, a bag and a T-shirt — are not on display, however. “You can see them in Thierry Perez’s drawings, but they’re not very well preserved, so we decided to show them only in the sketches,” Saillard explained.