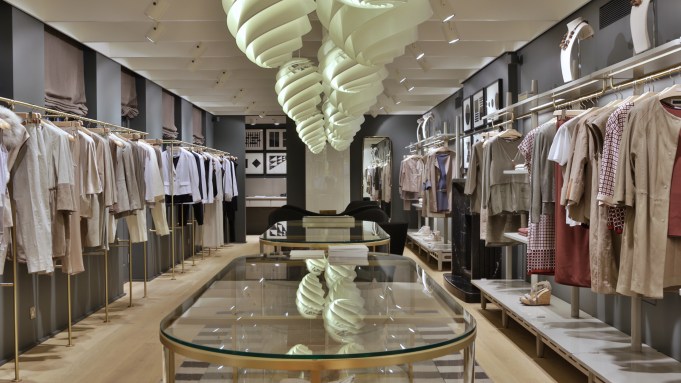 The 2,300-square-foot space stands at 42 Conduit Street and spans four floors of a grand Victorian town house. The Perugia, Italy-based label tapped Italian architect Nicola Quadri to design the store, which has a warm-yet-modern feel. In terms of furniture, the label has honed in on Scandinavian pieces, such as midcentury cherry wood coffee tables by Triva-NK; Sixties-era sofas and armchairs by Carl Malmsten and a Fifties brass and crystal chandelier designed by Hans-Agne Jakobsson for Markaryd.

The store carries Fabiana Filippi’s entire collection of women’s wear, and is near Berluti, Vivienne Westwood, Moschino and Donna Karan on the street.

Mario Filippi Coccetta, founder and chief executive officer of Fabiana Filippi, said that while the label chose the Conduit Street location partly for its “proximity to Bond Street,” he liked that Conduit Street is “more intimate and relaxed.” He added that company’s London opening is part of its strategy to open stores in “the main European capitals.”

Earlier this year, the retailer opened units in Paris and Rome, adding to its boutiques elsewhere in France and Italy, and in Lithuania, Russia and Sweden. Next year, Filippi Coccetta noted, the label is planning on opening stores in more European cities.