From the blur, here are a few encounters that left an impression on our editors, for better or worse. 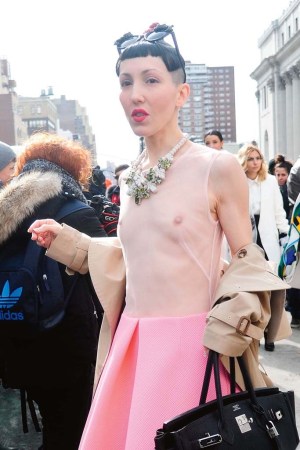 Countless moments of absurdity—whether silly, amusing or just plain maddening—occur daily on the monthlong trek through the four-city runway circuit.

The numbers alone on Fashion Month, as it’s been anointed, are staggering. Can someone explain, please, the need for more than 600 shows and presentations, with roughly 1,600 accredited journalists per city? That’s not counting Los Angeles and Tokyo. From the blur, here are a few encounters that left an impression on our editors, for better or worse.

• Did you know that Michelle Harper’s (seen here at the New York shows) sister-in-law’s name is Tata Harper? True story.

• SpongeBob, Frito’s, Hershey’s, McDonald’s. Whether you were lovin’ it or not, at least Jeremy Scott’s take on Moschino didn’t require any deep thoughts.

➽ The unwritten laws of fashion mandate one streaker per season. Prabal Gurung’s show had the honor.

• Iris van Herpen vacuum-sealed her models. Makes it easy to store them for next season.

• Meet Pascal Pascale, Tom Pecheux’s roadie, makeup test model and sometimes alter ego. “My partner put him in my kit, and when I opened it at the Peter Som show at New York Fashion Week, there he was,” said Pecheux. “Everyone started asking about him, and by the end of the show, one of my assistants had painted him with the show’s look, so we decided he then had to be Pascal Pascale, incorporating both genders. I am very shy, and Pascal can do things I can’t. He isn’t afraid. It sounds pretty silly, but there it is.”

• Roberto Cavalli thought it was a good idea to ignite a ring of live flames at the center of his overstuffed tent. Even more confounding was that an informal WWD poll found that it only scared the bejesus out of the Americans.

• Smocks were required attire at the Jacquemus show, implying a cameo by Gallagher or Shamu or something of the like. Alas, no flying chunks of watermelon or waves of water. It was just a conceptual gesture.