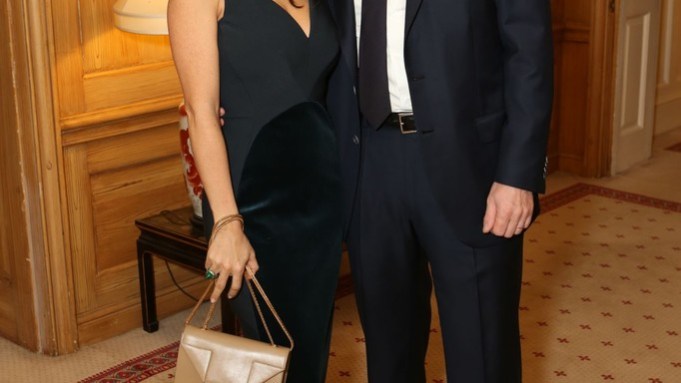 MODERN FAMILY: It was all about family at the cocktail party Samantha Cameron hosted Friday night at 10 Downing Street to kick off London Fashion Week. “Please drink, fill your glasses, there are no more speeches,” said Britain’s first lady, following her remarks and those from the British Fashion Council’s new chairman, Natalie Massenet.

Toward the end of the evening, Cameron chatted with her youngest daughter, Florence, perched on her hip while her other children threaded their way through the crowd in bare feet and dressed in pajamas. “Wait until you see the cat as well,” deadpanned one of the waiters, who dodged the siblings as he popped back and forth from the kitchen.

It wasn’t just Cameron’s family in the frame: John Rocha and his daughter Simone held court in one corner while Beckham said she was headed to Paris for the half-term school holidays to do “family things” with her kids. Kristina Blahnik, meanwhile, today will be accompanying her uncle Manolo to Madrid, where he is to receive Spain’s National Fashion Design Award.

Helena Christensen had to dash off early to catch a flight to New York. “I’m leaving Downing Street for the snowy ski slopes,” said the model, was in London to launch her new lingerie collection for Triumph. “It’s a long weekend, and I promised my son I’d take him skiing with his friends in Canada. I’m not really a skier — I did try snowboarding though — I’m just looking forward to the outdoors and invigorating air.”

Those who weren’t talking relatives were talking business, including Stephanie Solomon, fashion director at Bloomingdale’s, who is in London to prepare for a major in-store promotion of British fashion and design.

The event will kick off in September, but there’s no official name yet. “I’m calling it ‘The British are coming,’” Solomon said. “It’s not a country promotion — it’s going to be a disruptive British experience throughout the store because Bloomingdale’s loves all things British.”