Lauder made a double debut on both sides of the Atlantic to celebrate the launch of her new fragrance collection.

By Julia Neel and Belisa Silva on November 8, 2013
View Slideshow 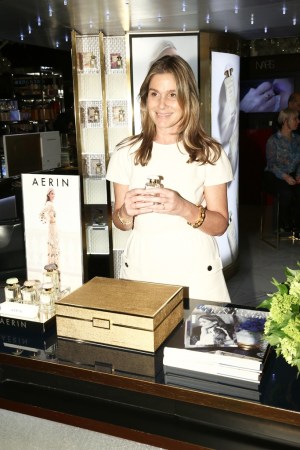 FAMILY TIES: Aerin Lauder made a double debut on both sides of the Atlantic to celebrate the launch of her new fragrance collection. On Thursday morning, she stopped by a familiar family location — the Estée Lauder beauty counter at Saks Fifth Avenue in New York.

“I think Saks was always one of her favorite stores,” said Lauder of her grandmother. “Even when she was older she used to love to come and see the Christmas windows. It was always very important to her.”

Also in attendance at the morning press event was Leonard Lauder and Fabrizio Freda, president and chief executive officer of the Estée Lauder Cos. Inc.

Earlier in the week, Aerin Lauder found a chance to unwind in London before launching her scents at Harrods.

“I committed the cardinal sin of jet lag,” she told WWD at Claridge’s, where she was staying. “I had a nap. I know I shouldn’t, that it just makes it worse, but the room was just so beautiful and my kids aren’t here so I just did it.”

She then was awarded the Harper’s Bazaar Business Woman of the Year Award during a starry event in the Claridge’s ballroom. Wearing a striped Stella McCartney dress, Lauder accepted her award and from last year’s winner, Anya Hindmarch.