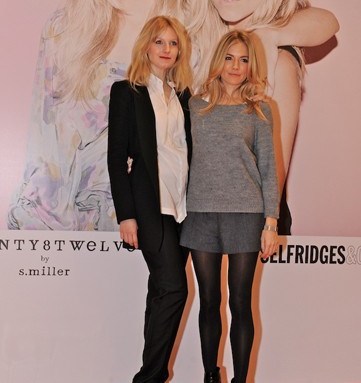 FAIRGROUND ATTRACTION: Sienna and Savannah Miller turned up at Selfridges on London’s Oxford Street Monday to make an appearance at a fairground-themed pop-up shop for their Twenty8Twelve spring collection. The duo met shoppers in the third-floor space, which had been open since March 5, and was done out with strings of multicolored lights and billboards with cut-out faces, so that customers could pose with their face on a model’s body. “I saw Giffords Circus [a modish British circus troupe] in the summer and I just loved it,” said Savannah of her inspiration for the space. “It’s hard to make a pop-up shop unique and it’s always nice to do something a bit kooky.”

The duo opted to skip a runway show for the fall season, and instead showed the collection in a series of private appointments. “We love doing shows, but because we’re not breaking the mold in what we do designwise it’s not particularly translating to sales,” said Sienna. “And the more important thing for us is sales at the moment, especially in this economy.” Also, the sisters have opened a new store, their third, in London’s Covent Garden.

But Sienna, who’s appearing in the Terrence Rattigan play “Flare Path” at London’s Theatre Royal Haymarket, said the sisters have more ideas for the label up their sleeve. “We’d love to do maybe five couture dresses a year — just to have access to those fabrics,” said Sienna. “[And] we’d love to open a store in New York. But frankly, we’re really comfortable with where the label’s got to now.”

FAMILY VALUES: A crack may be appearing in the united front that Hermès has been trumpeting since LVMH Moët Hennessy Louis Vuitton revealed it had taken a stake in the luxury firm. Nicolas Puech, the brother of Bertrand Puech — the executive chairman of Emile Hermès Sarl, which represents the family shareholders — told a French newspaper he thought it was not a good idea to lock up all the family’s shares in a nonlisted holding group in order to protect the firm from a takeover bid by LVMH chief Bernard Arnault.

“I told my family that locking up our shares in a holding would have the major drawback of depriving the family shareholders of their individual power to control management,” Nicolas Puech told the weekly Le Journal du Dimanche (JDD). He nonetheless added that his relations with his brother, who has repeatedly called for Arnault to withdraw or reduce his stake, remained positive. “But in a family, you can’t agree on everything. I am very attached to my family and above all I want it to remain united,” Nicolas Puech said.

Hermès chief executive officer Patrick Thomas told a news conference recently that one family member who owned roughly 10 percent of the capital had not brought his shares to the holding for tax reasons, but that he was united with the family. That family member was presumably Nicolas Puech, whom the newspaper described as a tax exile owning between 6 and 10 percent of the Hermès capital. Nicolas Puech, 68, said he thought other family members agreed with him. “I have close relationships with many of my cousins,” he said, in a comment likely to be interpreted as a sign that Arnault could yet win over members of the Hermès clan, who are divided into three family branches: Puech, Dumas and Guerrand. Officials at Hermès were not immediately available to comment on the report.

ALL FOR ART: De Beers Diamond Jewellery is hosting its first artist collaboration, with contemporary artist Mary Beth Edelson. The two were brought together after the artist chose to exhibit her work next door to De Beers’ flagship on Fifth Avenue in New York. The resultant exhibit, titled “Player,” was split between De Beers’ store and a penthouse at the St. Regis hotel, and featured Edelson’s photography and drawings on large sheaths of linen.

“Contemporary art is of particular relevance to De Beers Diamond Jewellery,” said François Delage, chief executive officer of De Beers. “Our creations are born from the desire to celebrate the innate power of the femininity of women, and this philosophy is completely aligned to the support of contemporary female artists.”

This was Edelson’s first solo exhibition in New York in over 10 years. The exhibition will be on view at the De Beers Fifth Avenue boutique until Saturday.

FASHION DRIVE: Fashion has never had so much torque. After the debut of the new Gucci Fiat 500 during Milan Fashion Week, Trussardi and BMW have unveiled their own stylish ride. The limited edition 5 Series Gran Turismo is the latest in a series of special projects promoted by the Italian fashion brand this year for its centennial celebrations — there will only be 100 of the cars available to buy. The interiors are made of leather, whose color and design are inspired by a historical glove design from the archives of Trussardi, a company whose beginnings lie in the glove industry. The car comes in Heraldic Brown, a color exclusive to the collaboration, and features the Trussardi logo both inside and out. The car retails for from 70,000 to 104,000 euros, or $92,285 to $144,540 at current exchange.