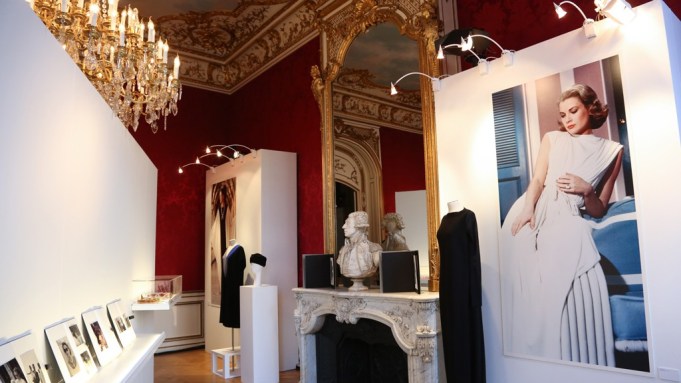 FAMILY YARNS: Old dresses can be sad in an exhibition, but not knitwear. “It reminds one of happy times,” Princess Caroline of Monaco told WWD on Tuesday in Paris as she led a tour of sweaters that students from Central Saint Martins designed for Pringle of Scotland, taking inspiration from the archive of her late mother, Princess Grace of Monaco.

Princess Caroline explained that considerations for formal and public events include appropriateness, style and the like. Not so what’s worn at home with the family or on holiday. “It’s a more intimate choice,” she explained as clips of family movies were projected on the wall behind her.

Five students from Saint Martins’ master’s program drew on elements of Kelly’s public and private lives. Jaeyeon Lee transposed the dramatic gull-wing neckline of an evening dress into a trompe l’oeil crewneck, while Louise Morris etched patterns on twinsets from Kelly’s collection of flower pressings and added minimalist scallops to cardigans. “She wore a lot of knitwear with soft details,” Morris explained.

In her first dress design for Pringle, Tilda Swinton interpreted a Grecian gown worn by Kelly into a minimalist, long-sleeve knot column with a bloused back and a front panel that hangs free. “It’s a wrap,” she said, demonstrating how the panel hooks with a strap on one shoulder.

The Scottish actress said knitwear only evokes fond family memories for her, including runs to factory stores with her mother in the Scottish Borders region, where such expertise is concentrated.

The Princess Grace capsule collection is the latest iteration of the Pringle Archive Project 1815-2011.