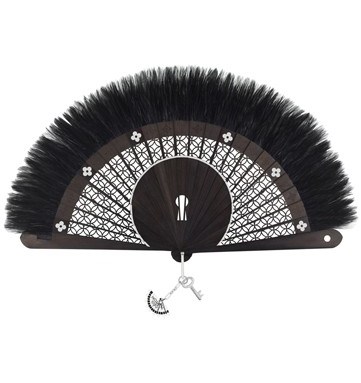 FANS IN CANNES: A limited edition fan designed by Louis Vuitton in collaboration with Spanish actress Rossy de Palma will go on sale on Monday for one day only in Vuitton’s Cannes store on the Croisette. The heat-beating accessory is already on sale for 400 euros, or $546 at current exchange, in a selection of Louis Vuitton stores in Spain until June 30, with proceeds going to the OrphanAid Africa charity, of which de Palma is an ambassador. Also on display will be a one-off fan, adorned with ostrich feathers, dubbed Extraordinary, also designed by Vuitton and de Palma, that will be sold at a charity auction over the coming months, also in aid of OrphanAid Africa.

Meanwhile, Spanish actress Victoria Abril is also putting her star power behind OrphanAid Africa via fashion e-retail site Modz.fr, which will transfer 1 euro, or $1.30, to the association each time an order is placed. Modz carries clothes from brands like Nocollection, Stella Cadente or Antik Batik. “It’s a good way to mix useful and pleasure,” says Abril.

CALLING ALL CUSTOMERS: Details of a far-reaching consumer initiative to take place this fall are expected to be unveiled sometime next week with New York City Mayor Michael Bloomberg, Vogue’s Anna Wintour, designers and retail executives providing a united front in an attempt to jump-start business. The initiative is believed to have the participation of top city retailers and will come at a time when stores have been hard-hit by recession. Vacant storefronts are cropping up, tourism is off and layoffs have plagued several industries, from publishing to Wall Street. Activities will likely include various special events, from personal appearances to extended shopping hours, to lure customers back into the stores.

FASHIONABLY LATE: Les Arts Décoratifs in Paris will gather no Moss this year. The Paris museum, which had planned an exhibition to open in November on the creation of the “Kate Moss myth” in advertising, has postponed it until 2011. Curator in chief Pamela Golbin cited an “overwhelming” response from photographers and artists wishing to participate and submit commissioned works about the supermodel and “we want to have enough time to mount this properly.” The exhibition is slated to open during Paris Fashion Week in March 2011 and run through Aug. 28.

LUNCH LADIES: A well-heeled group of ladies including Heather Mnuchin, Sloan Barnett, Judith Giuliani and Barbara Walters filed into Cipriani 42nd Street on Thursday for a benefit in honor of New York Presbyterian Lying in Hospital. Akris, which sponsored the event, treated guests to a midmeal runway show of its fall collection. “This event combines fashion and Bellinis. My favorite things,” said Barnett, who acted as co-chair. Akris showed its support in more ways than one: Caroline Brown, chief executive of the company’s U.S. division, switched bras with Barnett, who suffered a wardrobe malfunction moments before she was to hit the podium. “This shows just how committed a company they are,” the socialite told the crowd.

HE’LL TAKE PARIS: Last season when Tim Hamilton launched women’s wear, he presented it in Paris, on the heels of his men’s presentation, which he held in New York as usual. But Paris suited the CFDA-nominated designer so well, apparently, that now he has chosen it for his first men’s runway show, which will take place there in June.

AFFLICTION EXPANDS: Affliction Clothing, the Seal Beach, Calif.-based rock-inspired men’s line, will launch a core collection for women June 30. The collection will include silk and bamboo V-neck and scoopneck tops, tanks and dresses, denim and jackets all featuring the brand’s distinctive graphics, foil and patch appliqués, metal grommets and deconstructed detailing. Retail prices range from $128 for tops to $500 for leather jackets. The women’s line will be available at Affliction boutiques in Los Angeles, South Beach, Moscow and a Las Vegas store set to open in July. Owner and designer Eric Foss called the collection “a natural next step for our brand.” In another intuitive marketing move, the four-year-old company has signed rocker Gene Simmons as its latest brand ambassador. Ozzy Osbourne also designs a collection in partnership with the brand and appears in its print ads.

GOLDEN OLDIES: Forty creations by the late design legend Elsa Schiaparelli, including a circa-1938 shocking-pink and black striped evening gown and a rare 1937 Lesage-embroidered jacket made in collaboration with Jean Cocteau, are part of an exceptional sale of vintage couture pieces due to go under the hammer July 3 at Drouot-Richelieu auction house in Paris. Dating from the Twenties through the Eighties, designs by Jean Patou, Gabrielle Chanel and Christian Dior will also figure among the lots.

APOCALPYSE NOW: Look who’s trying his hand at designing clothes: Anselm Kiefer. The acclaimed German artist — whose haunting, large-scale works often depict themes from Nazi rule — has been tapped by the Opéra Bastille in Paris to mount a performance work to help mark its 20th anniversary. Premiering on July 7, “Am Anfang,” or “In the Beginning,” was conceived entirely by Kiefer — from sets to costumes.