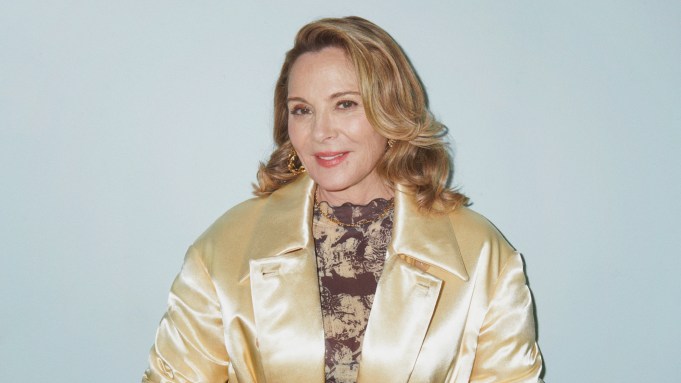 Farfetch is tapping a group of celebrities for its latest campaign.

“Iconic fashion moments from pop culture celebrities are the ultimate reference for this generation of stylists and designers,” said Farfetch creative director Yannis Henrion, about the campaign. “Fashion icons that emerged from pop culture in the ’90s, their aesthetic and approach to style, feels so relevant and modern now as it is quite bold, but also very wearable.”

He went on to explain that Cattrall was chosen because she’s “one of the most referenced fashion icons of this day and age” thanks to her beloved role as Samantha Jones in “Sex and the City.” He also explained that Hartnett brings in his own devoted fan base of a different generation.

Isabel and Lacy were chosen to represent a new generation of talent and for their respective unique styles.

“Kim is truly an icon, not only because of her style choices, but because of who she is as a person — she is real,” he said. “A true pop icon, no explanation needed. Josh is a forever crush and brings a sense of nostalgia as Hollywood’s reigning heartthrob of the 2000s. Steve brings his influential personal style that challenges gender constructs. María, an empowered female singer-songwriter, personifies her status as an artist to watch.”

Each campaign star appears in the photos channeling their own style. Cattrall embodies a chic persona, wearing pieces like a butter yellow silk trenchcoat and an Area pink and blue-printed sculptural jacket.

Hartnett goes with a laid-back style, wearing a brown fitted jacket with black trousers in one photo and an untucked blue striped button-down shirt in another.

Lacy is photographed outdoors, wearing pieces like a graphic-printed tank top and knee-length shorts while Isabel goes with Y2K-inspired pieces, like a fitted Kim Shui T-shirt paired with a Miu Miu miniskirt.

“All of the amazing talents of this campaign channeled their own personal styles and chose their looks from a mix of established brands and up-and-coming designers,” Henrion said. “With an extensive catalogue of luxury fashion available on Farfetch to choose from, each were able to take their references and truly make it their own.”

Click through the above gallery to see more photos from Farfetch’s spring 2022 campaign.