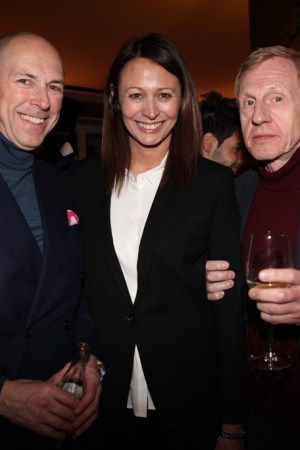 NEW HORIZONS: Guests who braved the snow to attend a cocktail hosted by Farfetch and London Show Rooms in Paris on Friday night were welcomed by a crackling log fire. Held in a ground-floor reception room at the Hôtel Particulier in Montmartre, the event celebrated the recent sponsorship agreement between Farfetch, an online marketplace for independent designer boutiques worldwide, and the London Show Rooms, an initiative by the British Fashion Council to support and mentor emerging designers.

José Neves, founder and chief executive officer of Farfetch, said the partnership was natural. “Our boutiques are the first ones to pick the young designers and to take risks before the big department stores, before the big Web sites,” he noted. “So for us, it’s very compatible, because we’re about independent, innovative fashion and that’s what these designers are all about, too. We hope to be not just a sponsor, but also to help by bringing our network of boutiques…to see the collections.”

Designer Christopher Raeburn said the London Show Rooms event, which also takes place in Los Angeles and Hong Kong, was an opportunity to reach retailers in emerging markets. “At the moment, we have no stockists at all in South America, for example, and even within China, we’re looking now to grow a little bit more,” said Raeburn, known for his ethically aware men’s and women’s ready-to-wear.

Patrick Grant, creative director of Savile Row tailor Norton & Sons and its ready-to-wear business, E. Tautz, said the tough economic climate meant buyers in mature markets were still hesitant to pick up new men’s wear brands. “For us, the emerging markets are a much bigger opportunity,” he said, noting that China and South Korea are the second and third largest markets for E. Tautz.

Benjamin Kirchhoff, one half of the design duo behind Meadham Kirchhoff, said the label’s largest stockist is in Kazakhstan. “They have an interesting eye. From us, they always end up buying the very elaborate, quite showy kind of pieces, but it’s also very well balanced in terms of the buys. We have interest from the new Russian countries, as well,” he said. But the market he would most like to conquer is a mature one: The brand still has no presence in New York.