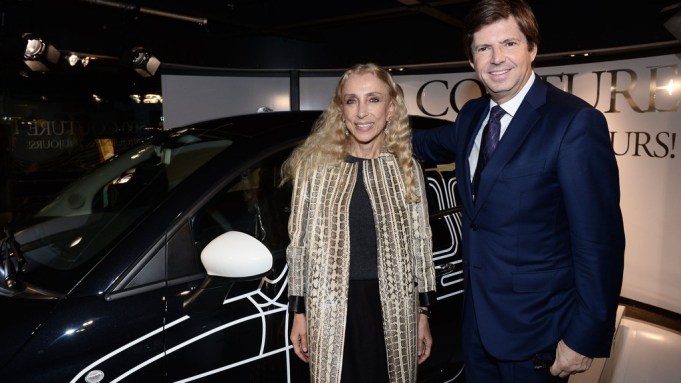 BABY YOU CAN DRIVE MY CAR: Fashion and cars are having a love-in.

Farida Khelfa, Giuseppe Zanotti and Vincent Darré were among those who turned out to inspect the car, which features a life-size silhouette of the original 1957 Fiat 500 drawn on the side panels.

The vehicle — which comes with Poltrona Frau leather seats, a leather steering wheel with radio controls and a glass sunroof — will go on sale in major European markets in November. As a collector’s item, it will be delivered directly to the new owner’s home along with an 1:18 scale model in a showcase.

Sozzani said the fashion and automotive worlds were naturally compatible as both “want to customize, we want to be unique, and in a way, what we do for a bag, for a dress, you can even do for a car.”

Arad has his own take on the concept of couture. “In my world, I do studio pieces that are not for anyone. They are like art: You don’t have to negotiate anything with anyone, you don’t have to consider any commercial thing, you just do it,” the Israeli designer said.

“When you design industrial products, there’s a lot of things to consider like the cost of production and desirability and so forth. So the trick is not to surrender, to do things that are a) new and exciting and b) successful. Most stuff is not like this but some stuff is like this, and that’s what we like,” he added.

The presentation took place ahead of the Paris Motor Show, which runs from Oct. 4 to 19. It will include an exhibition titled “Cars and Fashion” with cars previously customized by Hermès, Paul Smith, Jeremy Scott, Mango and Little Marcel, electric concept cars designed by Courrèges and an installation on Alcantara by Manish Arora.

The exhibit also includes vintage footage including an interview with the late Hermès ceo Jean-Louis Dumas, whose Volvo 240 Turbo will be among the vehicles displayed. Among the new products on offer at the show, Maserati will present the Ghibli Ermenegildo Zegna Edition on its stand.