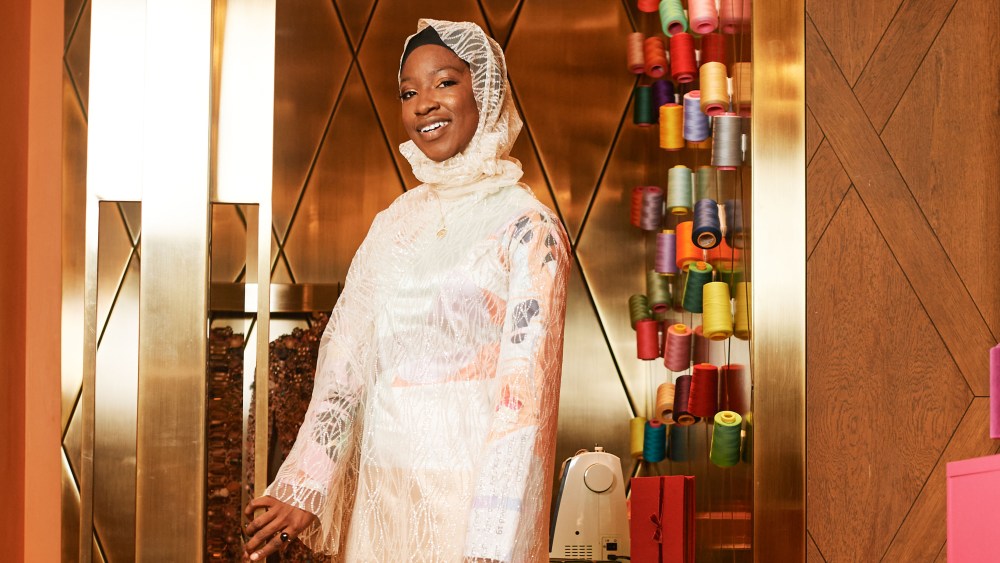 Elle B. Mambetov wants to expand the idea of what modest fashion can be.

The Texas-born designer from a self-described “super Christian” family converted to Islam three years ago, and rebranded her Elle B. Zhou fashion label from “Miley Cyrus swinging on the wall” as she called it, to covered-up and colorful with an avant-garde spirit.

She landed in Los Angeles after a controversial start in London that included imprisonment for fraud, but she maintains her innocence.

Seeking a fresh start, in November 2020, she opened the Elle B. Zhou modest fashion luxury boutique in L.A.’s Beverly Center, featuring her own graphic print ready-to-wear, and several other brands from the Middle East, including Azzi and Osta (Lebanon); Rayane Bacha (Lebanon); Yasmin Mansour (Doha), Kojak Studio (Cairo) and Okhtein handbags (Cairo). Prices are $2,000 to $50,000.

“After I converted, my style started to change; no one forced me to wear a hijab, it was natural for me,” she said during a recent store visit of wanting to dress more modestly. “But when I was looking for something to wear, it was, where are the clothes? Everything was really cheap material, or all black. And I never wear black. I don’t want to.”

Cut to her boutique, a candy store of eye-catching designs with tiered tulle evening dresses, wrap skirts and hand-beaded bomber jackets displayed on mannequins that show how garments can be styled in a modest way, with sequined or tulle long-sleeved T-shirts underneath, or colorful coats on top, for example.

“It’s a how-to guide for layering,” Mambetov said, noting that about 40 percent of her clientele is Muslim. “A lot of people dress modestly who are not Muslim,” she added of the mix of Hollywood stylists, rappers and people “looking for something nobody else has” who walk through her door on level seven of the Beverly Center, where her neighbors are Gucci and Balenciaga.

The Elle B. Zhou boutique is decorated in wallpaper of her own design, with a pillar covered in Arabic text that has beckoned some customers who are surprised to read their language in an American store.

There’s a sewing machine and seamstress on site to do alterations or customizations for shoppers, who can finish their look with diamond pendants from Terzihan (Istanbul), Dreamboule (Milan) and Tzuri (Beverly Hills) — and snap up a handmade-in-Rome Ecriteau velvet jewelry box resembling giant gumdrops. She also stocks Vanilla Pod, Rose Pellet and other scents from the Arcadia perfume brand by Dubai-based Amna Al Habtoor, a regular in Arab fashion magazines and the daughter of Dubai business leader, Sultan Al Habtoor.

Expansion into a 6,000-square-foot space on level eight of the Beverly Center is in the works for January, so she can incorporate lower price points into her buy, as well as men’s wear and caftans.  She also plans to launch a line of modest Elle B. Zhou swimwear next year.

“All I want to do is make the world inclusive. It goes back to my first Ramadan, I wanted an Allah necklace and there was nowhere to find it.”

Now she’s got one — by Saudi brand Yataghan — for sale in her store.