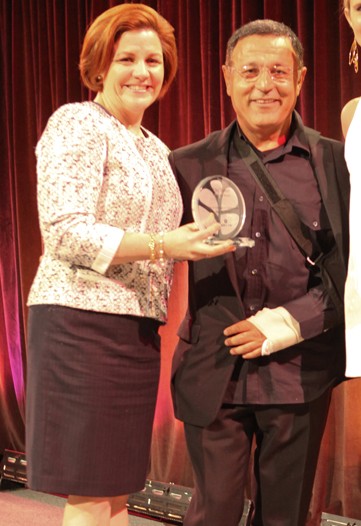 FASHION CHAMPS: Elie Tahari’s recent Emmy bag, which he created with Emmy Rossum, benefited Safe Horizon and, on Wednesday, it was time for the organization to return the honor. It recognized the designer’s efforts by bestowing him with a Champion Award at its 16th annual Champion Awards at Cipriani Wall Street. Rossum couldn’t be there to present Tahari with his award — a Tahari-clad New York City Council Speaker Christine Quinn did the honors instead, and the designer, whose left arm was in a sling after a recent biking accident in Sagaponeck, N.Y., was visibly touched by it. “I have a broken arm, not a broken heart,” he said. “Right now it is filled with love for Safe Horizon.” Stephanie March from TV’s “Law & Order: Special Victims Unit” hosted the night, which also honored Phillips-Van Heusen’s Pamela Hootkin and Kasirer Consulting’s Sun Kasirer with Champion Awards.

BALENCIAGA’S NEW DIGS: Is Balenciaga heading to Madison Avenue? Maybe, maybe not. But a company spokesman confirmed on Wednesday that the house, which has a store on West 22nd Street, will open a second retail outpost in Manhattan in early 2012. Details should be solidified by September.

INDUSTRY TYPES: Marc Jacobs is getting the museum treatment in Paris: Les Arts Décoratifs is gearing up for an exhibition next year devoted to the American designer’s work for Louis Vuitton, viewed alongside the contribution of the French brand’s namesake, who started out as a trunk maker in 1854. Pamela Golbin, the museum’s chief curator, plans to showcase two key periods in fashion history represented by the two men: the industrial revolution of the 19th century, and the globalization of contemporary fashion.

BAG LUNCH: The shopping-in-the-name-of-charity set stopped by Cipriani 42nd Street Thursday for the Madison Square Boys & Girls Club’s annual Purses & Pursenalities Luncheon. Before sitting, guests used smartphones to bid silently on wares from Hermès, Badgley Mischka, Tory Burch, Louis Vuitton and others. (Staffers were on hand to guide the less than tech savvy.) Following the bidding, guests sat for a lunch which honored the charitable efforts of Asprey, Avenue Magazine’s Julie Dannenberg and designer Eric Javits, some of whose bags were up for auction. “Usually everything sells out pretty much,” Javits said before lunch. “The girls can get bargains and they love it.”

FACE TIME: Yves Saint Laurent Parfums has just added one more face to its star-studded cast. The L’Oréal-owned brand has signed on French actress and model Marine Vacth to front a women’s fragrance due out in September. The 20-year-old played a role in Céderic Klapisch’s recent movie “Ma part du gâteau” (or “My Piece of the Pie” in English). Next up, she’s to act in an Alexandre Arcady feature film.

SCHOOL DAZE: Former New York City department of education chancellor Joel Klein may have been the guest of honor at Wednesday night’s Teach for America gala, but co-chairs Lew Frankfort of Coach and Mickey Drexler of J. Crew sure helped to pack the house. With the help of more than 1,000 guests, the financially minded duo racked up nearly $5 million. Frankfort and Drexler each boasted about being Bronx-bred public school kids at the Waldorf-Astoria event. Drexler joked about being older than P.S. 76’s principals now. “That’s not preferable but that’s the way it is,” he said.

Klein also spoke of self reflection, telling the crowd that the gathering was the closest anyone can come to walking in on their own funeral. Dennis Walcott, who is currently in Klein’s former job, described the humility he endured as a high school band member. “There’s nothing more degrading to one’s ego than getting on three buses with a trombone,” Walcott told the crowd, which included Andy Spade, Paula Zahn and Shelly Lazarus, among others.

IMAGE MAKER: Irene Silvagni has resigned from Yohji Yamamoto after almost two decades as a Paris-based creative consultant/image director for the Japanese designer. Silvagni said she left for personal reasons and would remain a freelance style and communications consultant.

HOM ALONE: Alexis Mabille will present his first men’s underwear collection in collaboration with French innerwear specialist HOM. The capsule line is to be presented during Men’s Fashion Week in Paris on June 23.