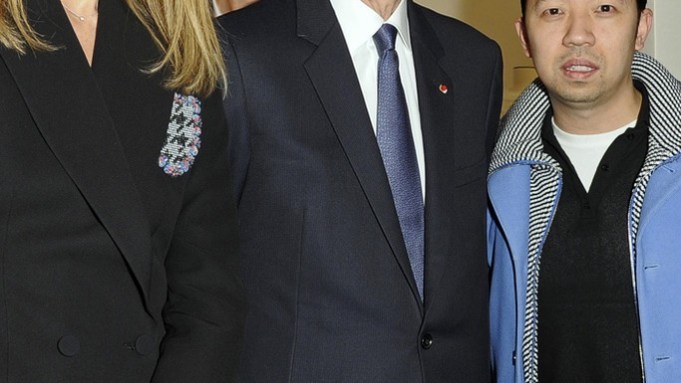 TALENT SCOUTS: The fashion pack turned out in droves Wednesday evening to view the creations of the 30 international designers short-listed for the first LVMH Young Fashion Designer Prize.

Karl Lagerfeld — who is on the designer-stacked jury that will select the victor — visited each label individually and posed for photos, but admitted he had already chosen his favorites. “There are two girls and a boy who I think are the best, but I’m not allowed to say that,” he said. “I started in life like this with a contest, and I think this contest is very interesting. But they are already in business, it’s very different, we were beginners who made sketches.”

Raf Simons, Nicolas Ghesquière and Kanye West were also spotted among the guests at the cocktail party to celebrate the inaugural prize.

LVMH flew the 30 semifinalists to Paris for two days to meet 40 jury members, who must vote for their favorites within a week, after which a list of 10 finalists will be revealed, to be narrowed down to a winner in May. The winner is to receive a grant of 300,000 euros, or $409,750 at current exchange, plus a year of coaching.

“It’s so exciting to see all these young talents here today celebrating fashion and creativity from all over the world,” said Delphine Arnault, who initiated the competition. Now second in command at Louis Vuitton, she gave her father, LVMH Moët Hennessy Louis Vuitton chairman and chief executive officer Bernard Arnault, a personal tour of the designers’ stands, housed in the auditorium of the company’s headquarters on Avenue Montaigne. Her siblings Antoine and Alexandre were also in attendance.

Italy-based designer Stella Jean’s label is already distributed in around 120 sales points worldwide including Moda Operandi, Saks, Le Bon Marché and Matchesfashion.com. “A giant like LVMH can help you structure business in a more mature way,” she said. “Even though we are well distributed, we are a small brand.”

The designer explained that she taps into her multicultural roots and merges traditional tailoring with fabrics from around the world, this season fabrics from Burkina Faso and Hawaiian prints.

Hailing from Nigeria, self-taught designer Adebayo Oke-Lawal of the Orange Culture men’s wear label, said, “We need platforms like this to help push for production and textile manufacturing in Nigeria.”

Antwerp-based South Korean designer Minju Kim, already familiar with international prizes since she won the H&M Design Award last year, was nevertheless not being complacent. “It’s already great to be here,” she said. “We’ll see for the next stage.”