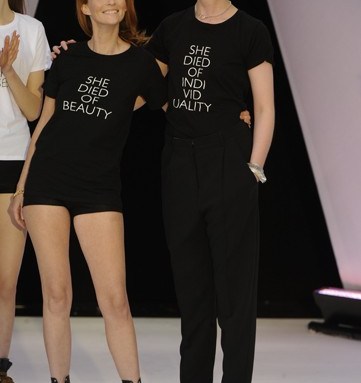 GREEN GODDESSES: “Everyone has this obsession with hemp! Sustainable fashion is no longer about hemp!” Laura Bailey enthused Friday as a crowd gathered in the garden at Clarence House, the London home of Prince Charles, for a showcase of sustainable fashion. “It’s so broad now. It’s no longer eco-chic. It’s just chic,” she asserted.

Bailey – along with Harold Tillman, London mayor Boris Johnson and Jo Wood – flocked to the townhouse designed by the Regency architect John Nash for part of a 12-day festival celebrating sustainable living – one of Prince Charles’ passions. The show included a selection of clothing by designers Stella McCartney, Christopher Raeburn and actress Emma Watson for the eco-friendly brand People Tree.

Bailey just returned from Africa, where she’s been designing her own jewelry line in collaboration with Made, a company that helps artisans and small communities in East Africa. Her pal Livia Firth, wife of actor Colin Firth, was also flying the eco-friendly flag. “Sustainable fashion is becoming more recognizable now. I don’t know one woman who wouldn’t ask herself where her clothes are coming from,” she said.

Firth is the owner of Eco Age, an environmentally-friendly store in West London. Earlier this year, during red-carpet season, she embarked on an eco-fashion challenge by wearing 100 percent sustainable evening dresses – some of them recycled from old clothing. Eco-friendly or not, does she still get nervous on the red carpet? “Yes, but less now. I have a vodka tonic before,” Firth said.

Vivienne Westwood curated and promoted the fashion element of the festival at the behest of Prince Charles. Other events included a workshop that showed visitors how to make bags from Charles’ old curtains, a tour of the prince’s organic vegetable plot, and readings by Carol Ann Duffy, Britain’s poet laureate.