Naomi Campbell had the fashion crowd out in force at Friday night's Fashion For Relief show. 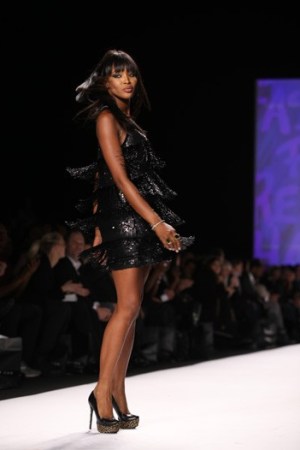 Karan had some preshow concerns — “toooo old and not a sample size,” she said beforehand. The designer needn’t have worried — she and her fellow runway newbies fared better than some of the pros. Agyness Deyn, for instance, toppled twice, but laughed it off, to the crowd’s delight.

Estelle was a quick study, having modeled in Thursday’s Heart Truth show. “I felt scared then but not today,” she said.

The tickets sold out in three days, raising $100,000, and with the addition of American Express’ $250,000 donation and the sale of the clothes on the runway at Net-a-porter.com, the event is expected to raise more than $1 million.

Sarah Ferguson welcomed the crowd. “When Naomi Campbell calls and says, ‘Fergie, can you be there on the 12th,’ you drop everything to be there,” she said. And while the duchess vowed not to embarrass herself with a runway spin, she nevertheless begrudgingly took to the catwalk, pretending to strangle herself.

Chris Brown was more buoyant backstage, pointing and asking a friend who a particular woman was. He said he wanted to be there “to give back to Haiti and to show other people how as artists, we can inspire the world and give back to others.” Campbell’s beau, Vladimir Doronin, cheered her on from the front row with Harvey Weinstein, Mary Ellen Mark, Anna Sui, Dennis Basso, Matthew Settle of “Gossip Girl” and Wendy Williams. The talk show hostess only had so much patience for the paparazzi. “I am not a model,” Williams told photographers. “I don’t do orders. Just click.”

Campbell, meanwhile, proved this was more than just about Haiti, bookending the show with a powerful tribute to her friend Alexander McQueen that included Guinness in a glittery, full-length bodysuit from the late designer’s spring collection, followed by a vignette of models like Helen Christensen and Karen Elson, who, like many in the audience, were overcome with emotion.