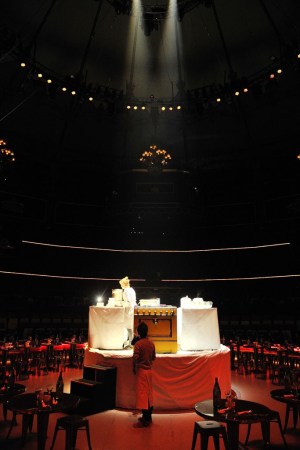 HYPE CIRCUS: Hip Parisians turn out in force at the Cirque d’Hiver on Monday night for an event organized by the trendy food organization Le Fooding. Most of them respected the suggested dress code: moustache for women and lipstick for men.

“I have a soft spot for burrata,” said Audrey Marnay, whose baby bump was showing under her Marc Jacobs sweater and Saint Laurent jacket. “And I love ginger ale mixed with cranberry juice,” she added.

French chef Jean-François Piège appreciates fashion. “I mostly wear Lanvin,” he said. “This dates back to my days at Le Crillon. The (Lanvin) boutique was stone’s throw away.”

The chef just opened a pastry shop across from his Thoumieux restaurant on Rue Saint Dominique. The place is designed by India Madhavi and pastries include the “Chou chou.” “It is like Russian dolls: a chou inside a chou,” he explained.

Sophie Calle, whose exhibit “Dérobés is currently on display at the Galerie Perrotin in Paris, confessed she was craving for an extra portion of mapo tofu prepared by Adeline Grattard. The chef of Paris restaurant Yam’ Tcha was cooking the spicy Szechuan dish on a raised state at the center of the oval ring under the theater’s dome, with hungry guests gathered around.

Art dealer Emmanuel Perrotin said he is all set for Art Basel Miami fair next week, where he will present for the first time the work of kinetic artist Jesús Rafael Soto.