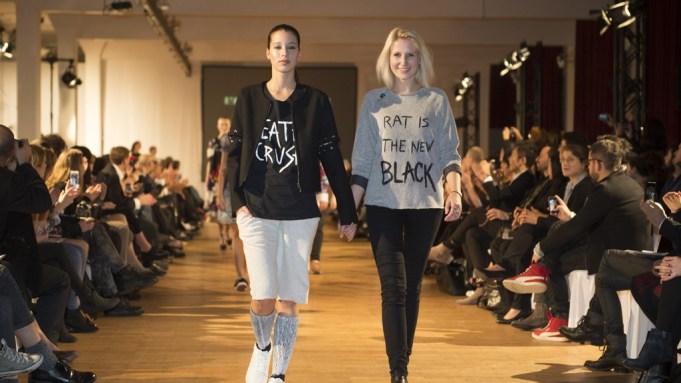 ESMOD BERLIN FETES TWENTY: Fashion School ESMOD Berlin celebrated turning 20 last week with a little help from the extended family. Representatives from all of ESMOD’s 23 global locations were on hand for the yearly reunion that rotates among affiliates. This year’s league of fashion nations included a special event Tuesday at Galeries Lafayette, and a gala fashion show Wednesday night, featuring designers from 10 ESMOD schools.

Dorothea Beisser and Silvia Kadolsky founded the Munich branch of ESMOD in 1989 (graduates include Damir Doma, Marcos Soto of Theory and the ThreeAsFour designers). Berlin followed in 1994 (graduates include Marios Schwab, Alexandra Fischer-Roehler and Johanna Kühl of Kaviar Gauche, and Felix Hupka, a creative consultant with Tom Ford). ESMOD Paris dates back to 1841.

Kadolsky, now chief executive officer of ESMOD Berlin, recalled the Berlin of the mid-1990’s, with its ruined buildings, dark streets, and the smell of burning coal that permeated its winters — yet said she thought at once imminently likable and full of possibilities. “I found it unbelievably exciting to open a fashion school here,” she told WWD. The first year started with 14 in its class. In 2011, English-language courses were added to serve ever-growing numbers of foreign students enrolling. ESMOD Berlin has now hosted students from 40 nationalities; in 2014, 220 students are registered for its programs, a Bachelors of Arts in Fashion Design and Pattern Making/Draping, and a Masters in Sustainability in Fashion.

Earlier in the week, the school and its international visitors feted the return of Labo Mode, a collaboration between Galeries Lafayette Berlin and ESMOD that highlights the city’s young designers. This year’s crop includes Isabell de Hillerin, Franziska Michael, and StudioWinkler by Julia Winkler, a 2012 ESMOD Berlin graduate. “All three have their own unique signature,” said ESMOD’s Silvia Kadolsky, who was involved in the selection process. She cited the cooperation with Galeries Lafayette as extremely. “The German market, well, it’s very interesting, but there are’t very many German buyers who support young labels. And that’s also why Labo Mode is so important.”

Designers participating in Labo Mode are featured for six months in a section on the store’s second floor, near established brands including McQueen, Sonia Rykiel and Agnès B. This, said Kadolsky, gives the young designers a chance to see what resonates with customers as well as build their brand visibility.