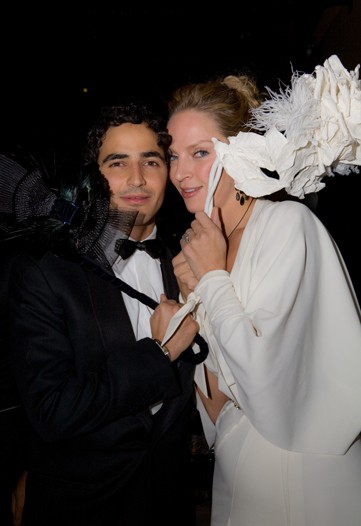 POSEN AWARD: At this year’s fifth annual Young Patrons of Lincoln Center’s fall masquerade, Zac Posen was presented with the arts leadership award for his commitment to supporting arts education. As a classically trained singer, Posen admits to being a big opera fan, and a personal favorite is soprano Anna Netrebko. Uma Thurman made it just in time during the last 30 minutes of the event to present Posen with his award. “Zac grew up being so involved and exposed to the creative process from his father, where dinner conversations centered on artistic endeavors,” said Thurman. Other Posen fans gathered at the Time Warner Center’s Allen Room to support the young designer including Amanda Setton and Nicole Fiscella of “Gossip Girl.”

BENDEL GETS POLITICAL: Henri Bendel is getting into the voting spirit. Today, the store will unveil its bipartisan windows featuring a group of five mannequins dressed in the latest cocktail dresses from Chloé & Reese and Greta Constantine. The girls are flanked by red and blue polling booths, each one representing a political party. Today, each mannequin can be seen with a large question mark above its head, but Wednesday morning, the question marks will be removed and the group will be placed in front of the winning voting booth. Several pounds of confetti will be thrown over the group in celebration of that party’s win.

Meanwhile, the other two windows, which flank the main door, celebrate the 50th anniversary of the peace symbol, with a tag line saying “Peace Is the New Black.” Inside, shoppers can choose from a range of peace symbol products from brands like e.vil, Sir Alistair and Yummi Glass. “We wanted to give these two historic and important events the Bendel point of view,” said Ed Bucciarelli, chief executive officer and president of Henri Bendel. “An irreverent and fashionable spin while underscoring the importance of the democratic process and honoring one of the most recognizable symbols in pop culture.” And, of course, one-upping Barneys New York, which plans to make the peace symbol a major focus of its holiday windows.

JEWISH KILT: John Pomerantz may have spent his career steeped in Leslie Fay dresses, but he never imagined he’d be wearing a skirt to his daughter’s wedding. However, this Saturday night, Pomerantz will happily don a Scottish kilt when his daughter Marnie marries Scotsman Neil MacLean in a ceremony at 583 Park Avenue. The couple lives and works in the entertainment industry in Los Angeles. “Whoever comes in from Scotland will wear a kilt,” said Pomerantz. “Neil’s family has their own plaid which they’ll be wearing, and the Scottish government gave a plaid to the Jewish people, which I’ll be wearing.” His wife Laura, however, will be dressed in a gown by Reem Acra, and the bride will be wearing Monique Lhuillier. Among the fashion crowd expected at the big event are Stephen I. Sadove, Brad Martin, Abbey Doneger, Josie and Ken Natori, and Bill Dillard.

SUPERSIZE ME: British jeweler Solange Azagury-Partridge has hit Manhattan for the debut of her first full exhibition. For the exhibition titled “Unwearable Jewels” — which launched Thursday at Sebastian + Barquet gallery in Chelsea followed by a private dinner at Waverly Inn — Azagury-Partridge used signature elements like the constellation and bright geometric patterns done in tables, lamps and even rugs. This is the first time Azagury-Partridge has done furnishings and objets d’art. Prices range from $15,000 for a carpet to $2.8 million for a diamond and chain maille chandelier, with 9 pounds of gold and 200 carats of diamonds. Azagury-Partridge, who opened her first and only boutique in London in 1995, has plans to open a 1,200-square-foot store at 809 Madison Avenue in February.

SWINGING STAMPS: The British Royal Mail is set to launch a first-class stamp to fete Mary Quant’s iconic miniskirt design. Quant, whose designs defined the Swinging Sixties, has created a monochrome stamp that features a model wearing a black miniskirt, black opaque tights and top with a white zip. The stamp is part of a series called British Design Classics, which also features the Mini car, the Concorde and a map of the London Underground. A book of 10 stamps costs 4.10 pounds (or $6.50) and will be available at British post offices nationwide from Jan. 13.

SHOW TIME: Musicians have always had a special relationship with fine jewelry and watches. Think Beyoncé Knowles and Lorraine Schwartz, Pharrell Williams and Jacob & Co. — even Renée Fleming. Some musical legends, however, choose to get in on the designing as well. On Dec. 7, Chopard will launch its second watch collaboration with Elton John at a private concert in Moscow. The crocodile rocker has been a friend of Chopard co-president Caroline Gruosi-Scheufele for a decade, and even commissioned the house to design his and husband David Furnish’s wedding rings. “He’s a watch and jewelry lover, he wanted something with character, a bold watch something sporty yet, elegant,” said Gruosi-Scheufele, who designed the limited edition chronographs that come in rose or white gold and different combinations of pink, yellow and black diamonds as well as rubies, emeralds and sapphires. Gruosi-Scheufele said that John is incredibly decisive on matters of design. “When he sees something, he loves it or he doesn’t. He’s quick,” she said. Ten percent of the proceeds from the collection will benefit the Elton John AIDS Foundation. “For me to be able to work with the foundation with the charity is a great honor, since I’m a fan of his music,” she added. “There’s only one Elton in the world.”