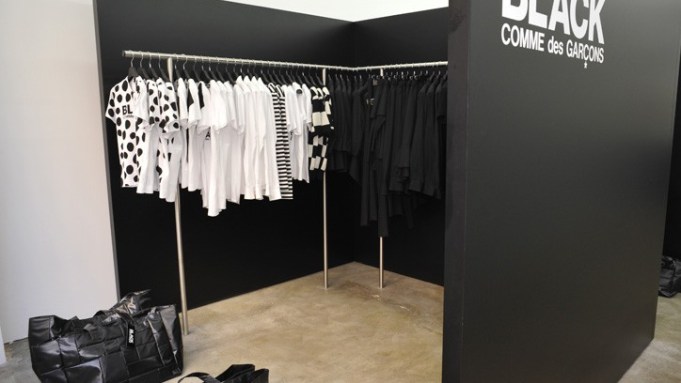 POP LIFE: Prada is the latest brand to join the craze for pop-up boutiques in Paris with the opening of an ephemeral retail space today, based in a former gallery space on Place Beauvau in the city’s 8th arrondissement. Measuring around 6,000 square feet, the temporary Prada unit will operate for around five months and stock women’s ready-to-wear and accessories, including an exclusive, limited edition handbag in gray leather.

In the run-up to the opening of its Paris flagship this fall, Uniqlo also opened an ephemeral store last week, due to operate till Sept. 13, in the city’s Marais district. The area also boasts the recently opened site of Black Comme des Garçons, the new wallet-friendly temporary “guerrilla” brand of Comme des Garçons.

HOMEGROWN: Foodies were among the first to put buy-local into practice, so it’s only fitting their summer getaways would be just as environmentally friendly. Todd English’s jaunts to Nantucket can now be considered work related, since he has unveiled a Figs restaurant at 29 Fair, an inn near the heart of town. “Sideways” actor Paul Giamatti has already pulled up a chair at Figs. And chef Jacques Pépin didn’t have to travel too far from his Connecticut home to recharge at the Stone House, an Italianite seaside retreat circa 1854 that bowed this summer in Little Compton, R.I. He popped into the restaurant’s kitchen to have a look, but left the cooking to the staff. Another guest, the comedian and “Sex and the City”-er Mario Cantone may have been envisioning roasts of another kind. He is on the roster to grill Joan Rivers at hers next month.

PREP SCHOOL PARTY: Charlotte Russe feted its fall collection at the Openhouse Gallery in New York’s SoHo last week, showcasing three new looks: “Brit Punk,” “Girly Grunge” and “Heirloom Romance,” all of which corresponded to groups of heavily made-up models that either shimmied onstage or poured imaginary cups of tea, depending on their look.

It seems Charlotte Russe has much to celebrate: the new collaborations with Kitson LA and denim brand People’s Liberation, as well as the employment of stylist Eric Daman, the “Gossip Girl” costume designer who attracted several of the show’s stars to the event. Michelle Trachtenberg and Jessica Szohr were grappled and playfully tossed about by an excited Daman, which left Trachtenberg almost face-planting on the red carpet. The two CW stars spent the rest of the night chatting on a banquette with a somber Rumer Willis.

Ali Lohan, coltlike in a mishmash of designer labels, was persuaded to spit out the gum in her mouth before speaking to reporters on the red carpet as her mother, Dina, struck poses by nearby mannequins for photographers. Elsewhere, Christian Serratos, a recent New York transplant and one of the stars of “Twilight,” was gleeful. “This is my first bona fide New York event,” she squealed. “I don’t feel like a tourist today.”

Meanwhile, Stephanie Pratt of “The Hills” was the last to arrive, showcasing her alleged recent rhinoplasty. With all the famous teenyboppers in attendance, one guest declared, “I think Charlotte Russe is on the upswing.” Then a “Brit Punk” model promptly began to play the air guitar and nearly punched a nearby waiter in the head.

NIKE BIKE: Sneakers were out in force as the arty street crowd descended on the Galerie Emmanuel Perrotin in Paris Thursday for the opening of “Stages,” the Nike-sponsored exhibition of works inspired by Lance Armstrong and his battle with cancer. Guests including Stefano Pilati, Pedro Winter and Justice toured the exhibits, which included everything from a gold-plated low-rider bike by Chicago-based artist Dzine to a portrait by Shepard Fairey (who created the iconic Obama “Hope” poster) of his friend Jessica Ikenberry, who beat breast cancer in her 20s.

“Kaws is my favorite,” said Carri Munden of Cassette Playa, referring to the New York-based artist’s eye-popping painting dominated by Armstrong’s signature yellow. Munden, who sported Liberty-printed Nike Dunks, said her second collaboration with Nike on its Rivals sneakers line comes out in October, while Cassette Playa will show for the first time in New York next season.

Turkish designer Yaz, one-half of the label Yazbukey, meanwhile, said she’s creating a new flavor inspired by Turkey for a special Valentine’s Day macaroon for Ladurée. The designer also received a request for accessories for Lady Gaga’s next video clip. “There’ll be a lot of elements from the last collection, which was about cult, inspired by Sebastien Tellier,” she said.

Fresh from supporting Armstrong during the Tour de France, Nike’s chief executive officer, Mark Parker, put in an appearance, while Armstrong himself posted a photo of the opening the same night with the tweet, “Wish I was there. Thanks to you all.” All the works will be sold to raise money for his Livestrong foundation.

HANDBAGS AT DAWN: After Jane Birkin donated her own Birkin and Princess Stephanie gave a bag belonging to her mother Grace Kelly, Naomi Campbell is next to auction off an Hermès Birkin for charity as part of the house’s annual vintage sale. The model, who’s celebrating 25 years in the fashion business, will donate her pale green alligator leather bag to raise funds for The White Ribbon Alliance, a campaign to stop women from dying during childbirth, for which Campbell’s a global ambassador and whose patron is Sarah Brown, wife of the British Prime Minister.

Campbell’s ongoing work for the campaign, including a video message this month telling Silvio Berlusconi and other G8 leaders to take action to prevent maternal mortality, is a fitting riposte of sorts to recent mocking by Sacha Baron Cohen’s Brüno character who tweeted: “Naomi Campbell inspires me — despite all ze pressure und fame of 25 yrs at ze top, she hasn’t changed a bit und has remained a total bitch.” The sale takes place on Nov. 10.

CLICKS AND BRICKS: Bridging the gap between bricks-and-mortar and virtual stores, trendy Paris fashion boutique L’Eclaireur plans to test a new e-commerce concept for its new women’s wear boutique on Paris’ Rue de Sevigny, due to open this fall. Online customers will be available to browse the store in real time and purchase certain items on display with the click of a mouse. The futuristic space, designed by conceptual Belgian artist Arne Quinze, will include an art room, 150 digital screens projecting artistic works and a system of hydraulically-operated wooden panels that will allow clothing collections to be hidden or exposed.

HONORABLE MENTION: Alain Nemarq, chief executive of French jeweler Mauboussin, has been awarded the Legion of Honor, the highest decoration in France, at a Paris ceremony. In his acceptance speech, Nemarq said that receiving the honor at such difficult times is an encouragement to persevere in “the audacity to create and invest.”