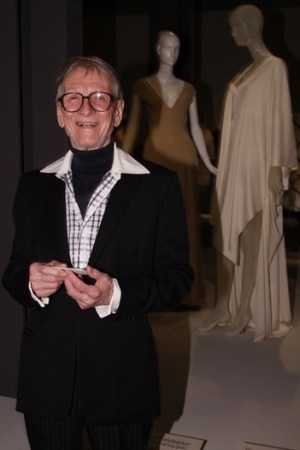 MEET THEIR PEERS: The Thursday night opening bash for the Museum at FIT’s “American Beauty: Aesthetics and Innovation in Fashion” exhibit offered the designers in attendance, many of whom had their own work on display, a chance to get better acquainted with their colleagues. “I loved Maria Cornejo’s pieces,” said Calvin Klein’s Francisco Costa. “I’m embarrassed to say that I didn’t know her work before, so I’m invigorated by what I saw here.”

Narciso Rodriguez noted that Cornejo and Isabel Toledo’s designs were his favorites, as were those from Charles Kleibacker, whose dresses dated back to the late Sixties. “He’s here,” Rodriguez said excitedly of Kleibacker, before admitting he was too shy to approach the designer in person.

Kleibacker, meanwhile, reserved his praise for a crimson Adrian gown, designed for Joan Crawford. “The dress was made in the Thirties and it’s held together all these years, with all this heavy beading,” he said. “That’s an incredible garment.” Others at the party included Cornejo, Yeohlee Teng, Thom Browne, Jeffrey Costello and Robert Tagliapietra of Costello Tagliapietra, Ronald Shamask and Daphne Guinness.

FEVER PITCH: The fashion flock turned out to lend its support to the performing arts on Thursday night at the New York City Opera’s Theater Debut Celebration. Carolina Herrera, Rachel Roy, Amy Fine Collins and Tinsley Mortimer (with a camera crew for her upcoming CW show in tow) were among those on hand at Lincoln Center’s David H. Koch theater for the event, which kicked off with a Dom Pérignon-hosted Champagne reception followed by a concert. The lineup, which featured a (nonoperatic) number by Rufus Wainwright in addition to more traditional performances, was enough to make some guests green with envy. “I would love to have a beautiful voice, but I just don’t,” lamented Herrera. “That’s exactly why I come to see the opera.”

SHOE IN: “I’m the trashy part of the mix,” said the self-deprecating Dinos Chapman from an opulent reception room at London’s 18th-century Spencer House, where Diego Della Valle and Marie-Chantal of Greece hosted a book launch and dinner Wednesday night in aid of children’s charity Over the Wall.

Nearby, on Albemarle Street, Garrard hosted guests including Princess Beatrice, Sir Philip Green, Yasmin Le Bon and Nicky Haslam for the launch of a new jewelry collection by Georgina Chapman. “It’s a great collaboration — I like those,” said Beatrice, pointing to a pair of diamond-studded chandelier earrings in the shape of a feather.

QUITE A MIX: Santa Claus, a Real Housewife of New York and Miss USA were among the disparate group that turned out to see Peter Nygård’s new flagship on Broadway and 40th Street. The Canadian designer took his time getting to the party. “There’s been a sighting,” one excited guest said, but it turned out to be a false alarm.

Nygård finally strode down a blue carpet — his signature color — with a model on each arm. The store had more than two dozen video screens playing loops of previous collections, blue lights on the ceiling and floor and a model dressed in silver with a silver-painted face, posing in the window. There was a fashion show of fall with 26 models and several Afghan dogs. “We couldn’t be happier, Nygård said. “A lot of hard work went into this. Just to be able to belong to this industry now” is great.

’TIS THE SEASON: Parisian department store Galeries Lafayette kick-started the holiday season by enticing French actress Elsa Zylberstein to officially switch on the lacelike lights covering its buildings on Boulevard Haussmann. Zylberstein also inaugurated Galeries Lafayette’s animated Christmas windows, where the characters have been dressed by Jean Paul Gaultier, Kenzo, Marc by Marc Jacobs, Maje, Manoush and Zadig & Voltaire. Zylberstein, who is playing the lead role in the theater drama “Hannah’s Demon,” said she was happy to lend her support to Galerie’s Christmas charity initiative, which this year will support educational projects in developing countries.

MANGO TO TAKE MADRID: Coming up Wednesday, Mango’s biannual runway show and after party will be staged at the Caja Mágica in Madrid. The Magic Box, built for the Spanish capital’s failed Olympic bid, is a vast steel and glass tennis complex by French architect Dominique Perrault on the outskirts of town. According to the Barcelona-based retailer, the 600 guests will include advertising faces Scarlett Johansson and Dree Hemingway; Oscar de la Renta’s son, Moises de la Renta (who purportedly is about to ink a deal with Mango), and Swedish songbird Emilia de Poret, who will perform.

MEET THE AUTHOR: Swarovski bedazzled the Gramercy Park Hotel Thursday to fete “Gossip Girl” stylist Eric Daman’s new tome, “You Know You Want It: Style – Inspiration – Confidence.” Leighton Meester as well as Tim and Helen Schifter stopped by to wish Daman well, while many of New York’s original gossip girls mingled in the background. “A catalyst for the book was that I wanted to send the message that fashion and style [don’t] have to be scary — [they] can be totally accessible,” Daman said. “That’s why I wanted to celebrate the book with Swarovski, because what they do is beautiful and accessible, too. I always say style is 20 percent fashion and 80 percent confidence. You have to own it.”