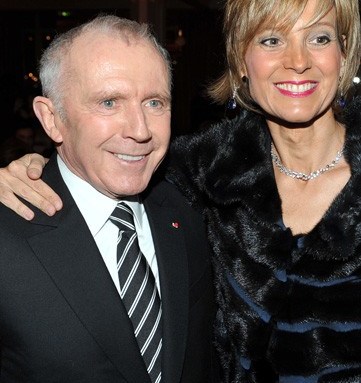 MISSING LINK: French fashion folk turned out in force for a charity dinner on Monday, but one key figure was missing. LVMH Moët Hennessy Louis Vuitton chairman Bernard Arnault, who was due to cohost the event with former archrival François Pinault, has canceled all public appearances following the death of his father, Jean Arnault, last Thursday. Designers from both LVMH and Pinault’s group PPR were out en masse for the fund-raiser benefiting Maison de Solenn, a treatment center for troubled teenagers. Nicolas Ghesquière said he might put in some store appearances to support the upcoming launch of his first fragrance, Balenciaga Paris. Bethy Lagardère, who last year staged an exhibition of couture outfits from her closet in her native Brazil, revealed she is working on another project scheduled to be unveiled there in June and July, traditionally the period when São Paulo holds its fashion week.

KNIGHT CAP: Berlin has been seeing a lot of Nick Knight lately and, if the London-based photographer has his way, he’ll be seeing more of the German capital in the future. The photographer shot the campaign image for Mercedes-Benz Fashion Week Berlin featuring a Gareth Pugh-clad, cyber-posed Julia Stegner in front of an equally futuristic Mercedes SLS AMG. But beyond the Mercedes connection, Knight is working on a scent project with Berlin artist and fragrance conceptualist Sissel Tolaas based on violence. There also is the link with David Chipperfield, the master architect behind Berlin’s stunning new Neues Museum, who’s also built two houses for Knight. “I’m trying to get him to build a third house for me in Spain,” Knight told WWD. “And as it’s 100 yards down from his, maybe I have a chance.” Other projects: A series of films for Lady Gaga’s series of tours, and working with IMG and Rodarte and Alexander Wang on fashion films for their shows in New York.