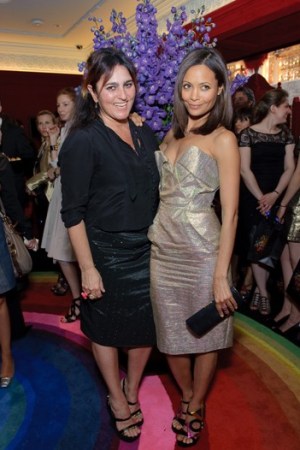 Newton admitted she was apprehensive about Azagury-Partridge’s move from her longtime home in Westbourne Grove to the posh shopping thoroughfare. “But then I saw this, and — wow — I fell in love all over again,” Newton said.

COACH, PENNEY’S EYE DEAL: Coach has decided to give Saks Fifth Avenue the exclusive on its upcoming Reed Krakoff collection, but also may have a gift for J.C. Penney — an accessories collection under a completely new label. Coach chairman and chief executive officer Lew Frankfort — spotted chatting with Penney’s chairman and ceo Myron E. “Mike” Ullman 3rd at the Mandarin Hotel, scene of Thursday’s night Global Department Store Summit dinner — acknowledged a collaboration is a possibility, but he stressed it would not be under the Coach label and it would have to be a new brand for the new channel. Ullman said nothing after Frankfort made his comment. Meanwhile, Saks will have a six-month exclusive on Reed Krakoff’s namesake brand launching this fall, Frankfort disclosed. Six months later, Saks will continue to have some level of exclusivity, as the distribution widens.

GAELIC GROOVE: Franz Ferdinand will claim some of the spotlight at the Pringle of Scotland men’s wear show in Milan. The Glaswegian rockers will provide live acoustics for the label’s spring collection at the Galleria Sozzani on June 21. Word has it Viktor & Rolf also is wrangling a special musical guest for its second men’s wear show in Paris.

BIBA BOOTY: Bonhams plans to auction furniture from the legendary Biba store on Kensington High Street and two Alexander McQueen dresses from the autumn 2007 “Salem Witch” collection later this month in London. The sale, dubbed Vision 21, will offer a quirky mix of merchandise ranging from mannequins and light fittings created for the store in the early Seventies to a library ladder to a display stand in the shape of a gray Weimaraner dog. The stand is the priciest piece in the Biba collection and is estimated to fetch between 5,000 pounds and 7,000 pounds, or $7,334 and $10,265 at current exchange. The McQueen dresses are the first to be sold at auction since the designer’s death in February. A gold-sequined number carries an estimated price of 12,000 pounds to 18,000 pounds, or $17,600 to $24,400. The other dress is made of peacock feathers, and its estimate is 10,000 pounds to 14,000 pounds, or $14,670 to $20,540. All of the items will go under the hammer in London on June 30.

HOME RUN: Leave it to Jean Paul Gaultier to spice up Roche Bobois’ home furnishings department. Corset-flavored, lace-up satin cushions; tattoo-print screens-cum-wardrobes on wheels, and carriagelike “Ben Hur” velvet chairs, also on wheels, are among elements of a capsule furniture line conceived by the designer for the house, due to be released in September. The pieces were presented at Roche Bobois’ Boulevard Saint-Germain flagship as part of its exhibition for Paris’ six-day Designer’s Days initiative, which ends today.

SCREEN SAVER: In the name of Nouvelle Vague, Stefano Pilati, Leith Clark, Clémence Poésy and Maggie Cheung braved airport-level security checks at the American ambassador’s residence in Paris Thursday night for a screening of a new buffed-up version of Jean-Luc Godard’s “Breathless,” produced by Studio Canal. Rodarte’s Laura Mulleavy — who, with sister Kate, partnered with Studio Canal to design the movie’s poster and T-shirts — modeled a pair of Eiffel Tower studs she’d bought from a tourist shop next to the Angélina tea salon earlier in the day. They hadn’t yet started to itch. “I have very sturdy ears,” said Laura Mulleavy. Poésy said she’s working on a film about Joan of Arc.

SUNSHINE STATE: Most party hostesses would be a ball of nerves when rain clouds appeared on the night of their outdoor bash. Elise Overland took a more happy-go-lucky approach. “I hung out my leopard-print bikini and the sun came out!” she said Thursday night at the sunset cocktails and barbecue she hosted on her Western Chelsea studio’s terrace for a screening of Poppy de Villeneuve’s short film “Say Good Morning to the Night.”

Certainly Mullins had a few instances of reconsidering her decision to traipse through the desert in sky-high heels. “I had a moment where I would look at Elise and Pamela and Poppy and we’d all be like, ‘What the f–k did we get ourselves into?’” said Mullins with a smile.

NATALIE PORTMAN DRESSES DIOR: Natalie Portman, named a new face of Parfums Christian Dior earlier this week, is already showing loyalty toward the French brand. Attending a ceremony honoring Mike Nichols at Sony Studios in Los Angeles on Thursday night, Portman wore a short guipure lace dress in pale rose from Dior’s cruise 2011 collection by John Galliano. The collection was shown recently in Shanghai. Portman’s deal with Dior marks the first time the actress represents a fragrance and cosmetics brand. Exactly which new project she will be involved with still remains under wraps.