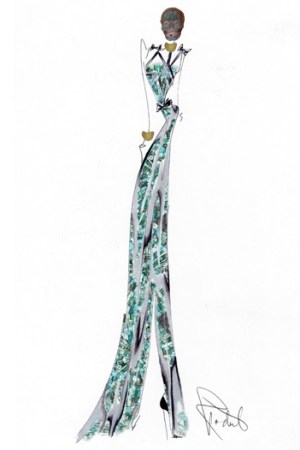 TEXT RODARTE: As part of Los Angeles County Museum of Art’s experimental mobile project, “Cell Phone Stories,” Rodarte’s Kate and Laura Mulleavy created five sketches, together titled “LACMA a la Mode,” which were inspired by works in the museum’s permanent collection. The sisters responded to a variety of periods and movements represented in the collection, translating works ranging from pre-Colombian artifacts to midcentury paintings into 21st-century dresses. The sketch shown reworks the Mexican, Mixteca-Puebla style piece “Mosaic Skull,” made from a human skull encrusted with turquoise, jadeite and shell. “Cell Phone Stories” also includes an essay by actor Rainn Wilson, and narrative works from artists Steve Fagin, Adrienne Ferrari, Kianga Ford and Rich Bott as well as writer Barry Yourgrau. The project will be transmitted via cell phone text messages (text LACMA to 67553) linking users to Twitter, Facebook and other Web sites. The project was inspired by the Japanese keitai shosetsu, text-based cell phone narratives known as “thumb novels” that are popular among teenagers.

STELLA’S OLYMPIC TEAM: Stella McCartney is collaborating with Adidas again, this time for the 2012 Summer Olympics. Adidas, the official sportswear partner of the London 2012 Olympic and Paralympic Games, has selected McCartney as creative director for the uniforms that British athletes will wear. An announcement from Adidas is expected today. McCartney designs the Adidas by Stella McCartney line of women’s athletic clothing, and most recently dressed tennis star Caroline Wozniacki for Wimbledon. An Adidas spokeswoman said the new partnership between McCartney and the brand would run from now until the 2012 Olympics, and would feature four separate collections. The first will bow in September, will be a men’s and women’s lifestyle collection “inspired by Team GB” and will be aimed at nonathletes and fans. It will be sold at Adidas stores in the U.K. The final collection will comprise the uniforms for the British team. “As a British fashion designer, it is an amazing, once-in-a-lifetime opportunity to be creative director of Team GB as the hosting nation of the London 2012 Olympic Games,” said McCartney.

RODEO DRIVE VISION: Badgley Mischka is beginning to nail down the details of its new two-level, 2,700-square-foot flagship on Rodeo Drive and Little Santa Monica Boulevard in Beverly Hills. The look will reflect Badgley Mischka’s retail aesthetic of combining modern and historic elements. Chandeliers, for instance, will be juxtaposed against reclaimed wood floors. The second floor will house the bridal collection, and the first floor will contain an array of merchandise, including the Mark & James contemporary collection, couture, handbags, eyewear, footwear, jewelry, watches, swimwear and fragrance. The store is expected to open this year after Badgley Mischka’s Shanghai unit opens at Hong Kong Plaza in August. It will take over a space formerly occupied by the boutique Boulmiche, which was famous for being the site where snooty staff snubbed Julia Roberts’ character in the movie “Pretty Woman.” Boulmiche moved to North Beverly Drive.

YOUNG GUNS: “I got told off because I wasn’t voting for anybody at one point. I couldn’t make my mind up,” said Stephen Jones, who was chastised by fellow judges of the Dorchester Collection Fashion Prize, including Giles Deacon, Daphne Guinness, Manolo Blahnik and Yasmin Le Bon, before the semifinalists were announced in London on Monday. Chairman Bronwyn Cosgrave said the panel narrowed down the entrants to five from 69. “All of the judges did their homework and were very passionate about the semifinalists,” she said before reading out the names of Chau Har Lee, Hermione de Paula, Louise Goldin, Mary Katrantzou and Thomas Tait. Indeed, Blahnik could not contain his excitement. “I’ve seen this boy called Tait. He’s so new, so wonderful — things that I’ve never seen before, so very rare. I loved it,” enthused Blahnik. The winner, to be announced in November, will receive accommodation and an event at a Dorchester Collection hotel of his or her choice and 25,000 pounds, or $37,900 at current exchange, toward his or her next collection.

WALK THAT WALK: Galeries Lafayette is hoping to establish a Guinness World Record by staging the biggest-ever catwalk show. On Sept. 30, the French department store chain will transform Boulevard Haussmann, home to its Paris flagship, into a 2-kilometer, or 1.2-mile, catwalk. It hopes a total of 10,000 people will take part in the Paris event, a parallel show in Berlin the same day and other fashion shows in its stores across France, as part of a series of events celebrating street fashion scheduled to take place from Sept. 8 to Oct. 2.

MAD ABOUT BANANA: For the second year, Banana Republic is teaming with AMC’s “Mad Men” for the “Mad About Style” campaign, which launches in all 400 stores on July 21. The style guide features images of the Emmy-winning show’s characters alongside similar looks from the retailer. In addition, “Mad Men” costume designer Janie Bryant and Banana Republic creative director Simon Kneen collaborated on video blogs posted on AMC’s Web site and Banana Republic’s Facebook page. A Casting Call promotion also offers one shopper a walk-on role in the show. To top it off, the company is sponsoring the show’s fourth season premiere on July 20 in Los Angeles, with an after party at Chateau Marmont, and a private luncheon the next day with Bryant and Kneen at the Sunset Tower.

ACTING UP: John Malkovich was in Berlin last week for the first time in a decade to toast the German retail debut of his Technobohemian men’s collection at trendy fashion emporium The Corner. It’s only the fifth door worldwide to carry the specialized men’s wear range, going into its third season for spring. “I’ve done several films here, one with Volker [Schlöndorff],” mused the actor, who was greeted by the celebrated filmmaker and given a signed copy of his autobiography. Malkovich next was headed to Saint Petersburg, Russia, where he is doing the opera “The Infernal Comedy,” which he is co-directing. Despite Malkovich’s own admission that “I don’t think it’s the greatest time in this business,” The Corner’s owners said they’re optimistic Technobohemian will appeal to a gentleman interested in making an individual fashion statement.

POPPY’S SWEET TOOTH: Those Good Humor-like trucks decorated with images of pink handbags, multicolored clutches, hand-drawn doodles and the Coach logo spotted around New York City are a marketing vehicle — no pun intended — for Coach’s Poppy collection. Two trucks, one dispensing ice cream, the other, cookies, can be found outside various Coach stores in Manhattan between noon and 11 p.m. daily. Inspired by the exuberant, floral extravaganza that is Poppy, Van Leeuwen ice cream created a flavor called Poppy that features morello cherries and Michel Cluizel chocolate. The Treats Truck has its own ode to the playful Poppy line: heart-shaped and flower-shaped cookies topped with bright sprinkles. Coach last year grabbed market share by expanding the offering of its lower-price bags in the $200 to $300 range, which includes Poppy. The average price of a Poppy bag is $240, compared with $290 for the average Coach bag. The Poppy-covered Van Leeuwen ice cream truck and Treats Truck will operate through the end of this month.

CFDA IN THE MIX: Intermix is on board as the sole retail partner at the Council of Fashion Designers of America’s Business Services Network. To get things rolling, the specialty chain will help champion Fashion Targets Breast Cancer, an international awareness initiative. In business for nearly 17 years, Intermix’s new partnership is the first of what is expected to be many strategic alliances. Next month, the company will launch a nationwide rebranding effort.