Anna Sherbinina took in Elie Saab’s couture show with a mini-me in tow: a blonde doll wearing an outfit designed by Saab for an auction benefiting UNICEF. 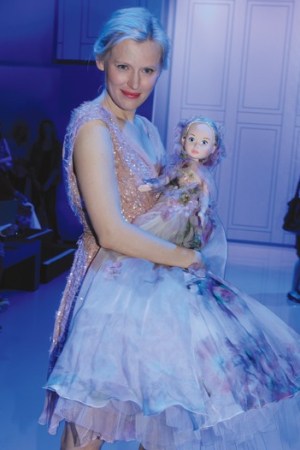 SEEING DOUBLE: Anna Sherbinina took in Elie Saab’s couture show with a mini-me in tow. The Russian model-turned-actress clutched a blonde doll wearing an outfit designed by Saab for an annual Christmas auction benefiting children’s charity UNICEF. “It wasn’t inspired by me at all, but I thought it was a fun way to draw attention to the project,” she explained.

Down the row, Daisy Lowe rocked a burgundy evening gown split to the thigh — and all before lunchtime. “I love it so much. I was like, I don’t care that it’s at 12:30 p.m., I’m just going to wear it anyway,” laughed the British model, in town with boyfriend Matt Smith.

ROCK CHIC: Erin Wasson brought a little rock ’n’ roll attitude to Paris couture week on Wednesday, unveiling the capsule ready-to-wear collection she designed with French luxury lifestyle brand Zadig & Voltaire. The Erin Meets Zadig line channels her own brand of androgynous cool and is inspired by her nostalgia for Sixties and Seventies rock. “I kind of feel like I missed the boat a little bit on the days of old. I wish that I was there at Woodstock. I wish that I was sitting on a tour van with a bunch of musicians,” sighed the model, dressed in a cream silk shirt, skinny black jeans and burgundy brocade ankle boots.

Wasson also toyed with gender boundaries for her first major movie role in “Abraham Lincoln: Vampire Hunter,” which she finished shooting recently in New Orleans. “I’m like a gypsy assassinating vampire at the time. She wears pants and boots and hats, and rides horses, and kicks Abe Lincoln’s ass and kills his son,” she smirked.

FOLLOWS HIS NOSE: After his couture show on Wednesday, Jean Paul Gaultier feted his new men’s fragrance, Kokorico, which first launches in France on Sept. 1. “I wanted something that was different from the ones I did before,” said the designer, who explained that prior Gaultier scents were more sugary, edible. “This time I wanted something strong, fresh and masculine. So I was thinking about something woodier, herbs and plants — that’s why there is fig.” Other notes in the juice include patchouli and cocoa. Also attending the scent party was writer Susan Orlean, who’s working on a Gaultier profile for The New Yorker.

STELLA’S ROMAN HOLIDAY: Stella McCartney will open her first stand-alone store in Rome on Monday, on Via Borgognona, near Piazza di Spagna. The 1,080-square-foot store will stock the brand’s ready-to-wear, accessories, jewelry, lingerie and the new Kids collection. The store, her second in Italy after Milan, has a brass-framed archway set against the original stone facade, and an oak parquet floor arranged in a herringbone pattern in a palette of plum, pale pink, blush, nude and taupe. Fixtures are made from a mixture of white steel, brass, organic wool felt and ceramic tiles. The Kids collection has its own area at the back of the store. To mark the occasion, McCartney has designed an exclusive version of her Falabella tote in a light gray shaggy deer that will only be available at the new store.

DE BEERS ROARS INTO KAZAKHSTAN: De Beers Diamond Jewelers is on a retail roll. After opening its first stand-alone store in Mainland China in May, the jewelry brand has just cut the ribbon on a unit in Almaty, Kazakhstan. The store, which spans 626 square feet, is operated by the Premier Metro Group, which specializes in the distribution of luxury goods, cars, mobile phones and fine wine. “Our opening in Almaty demonstrates the growing demand for De Beers Diamond Jewelry globally, beyond traditional markets,” said François Delage, chief executive of De Beers Diamond Jewelers. He called Almaty an “exciting, fast-growing market.”

The store opened over the weekend with a party for 250 guests on Bogenbai Batyr Street, the store’s new home and the city’s top shopping location.

THE WRIGHT STUFF: Karl Lagerfeld, who famously uses Shu Uemura makeup to realize his velvety sketches chez Chanel, broke out the nail varnish for his latest extracurricular design project: a range of pens and lighters for S.T. Dupont. Lagerfeld employed the polish to evoke the burgundy lacquer used for the unique fan-shaped writing instrument, which fits neatly between fingers and won’t roll off a desk. Lagerfeld plans to host a cocktail at his 7L book shop and photo studio Wednesday night to unveil the luxurious items.