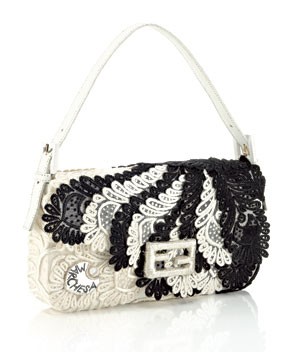 CARB COUNTING: Is bread back in fashion? Who knows. But baguettes are back at Fendi. Scarlett Johansson, Kim Cattrall, Sally Hershberger, Marchesa, Chris March and the MisShapes all customized baguettes that will retail each for $2,500 on eLuxury.com starting April 17 on a first come, first served basis. All the proceeds from the bags go to the charities selected by each designer. Hershberger, who sketched the phrase “Love is the drug,” with markers on her bag, chose the ASPCA, and Marchesa co-founder Keren Craig and co-founder and designer Georgina Chapman are giving their proceeds to the Robin Hood Foundation. “Our theme was simply modern and chic,” said Chapman. “We layered black-and-white hand-embroidered feathers softly on top of each other to create something graphic yet feminine.”

LUXURY RIDE: It seems that the Birkin bag is no longer the barometer of luxury. Now luxury equates with having an exotic car’s interior furnished by Hermès. Wednesday marked the U.S. debut of the Bugatti Veyron Fbg par Hermès. The 1.5 million euro, or $2.4 million at current exchange, car was on display at Hermès’ Broad Street store at Wednesday evening’s cocktail party. The car delivers 1,001 horsepower, has a 16-cylinder engine, is capable of reaching about 250 miles per hour and goes from 0 to 60 mph in 2.5 seconds. It’s the fastest production car ever produced. The cockpit is made of Hermès leather and the Fbg par Hermès refers to the French house’s Faubourg Saint-Honoré address. It is the first time the two companies have collaborated.

SOM SPOTLIGHT: On Wednesday, Peter Som hit Saks Fifth Avenue for his first personal appearance and trunk show at the store on behalf of Bill Blass, where he designs the women’s wear. The likes of Jamee Gregory, Jennifer Creel and Amanda Ross rifled through racks of dresses from the fall collection before taking their seats for a presentation. “It’s sort of like having a show all over again,” Som said.

The designer next will work on putting together his resort collection, which is sure to please executives at Saks, which put looks from the fall collection into five of its windows last week. “This is a very big deal,” said Ron Frasch, Saks’ president and chief merchant of the trunk show. “We loved what Peter shared with us on the runway. I thought it recognized the roots of the Bill Blass that I know. Having a strong Bill Blass is so perfect because we have the customer for it at Saks.”