A glowing Cate Blanchett helped light the new Armani Ginza Tower in Tokyo on Tuesday night, but it was a flying visit to Japan for the actress. 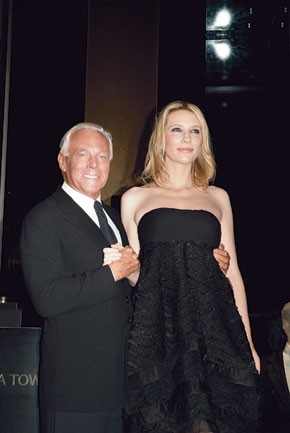 CATE COMES AND GOES: A glowing Cate Blanchett helped light the new Armani Ginza Tower in Tokyo on Tuesday night, but it was a flying visit to Japan for the actress. In the afternoon, Blanchett jetted in from Sydney, Australia, for a few hours, leaving right after the opening ceremony and before the inaugural dinner of the Armani Ristorante. This was the first visit to Tokyo for Blanchett, who is pregnant with her third child and was wearing a loose-fitting, strapless black Giorgio Armani cocktail dress. “Lots of kaftans for me now,” joked the actress as she received congratulations from well-wishers. As for a tour of the city, that will have to wait. “It’s sort of an expanded Times Square,” she said of the maze of tall buildings with neon signs in the Ginza shopping district, where the new Armani store is located. Blanchett rushed to get back to Sydney, where tonight she will debut as a director for the Sydney Theater Company. The actress and her husband, Andrew Upton, are the company’s co-artistic directors. Giorgio Armani will return Blanchett’s visit this week when on Friday evening he’ll attend a dinner in his honor hosted by the actress. Armani last month was named patron of STC after an undisclosed donation. On the weekend, the designer will visit another Hollywood friend in Australia — Russell Crowe — to watch a match played by the actor’s rugby team, the Rabbitohs, whose off-field suits are designed by Armani.

But Armani isn’t wasting his time in the Japanese capital. He revealed plans to open a hotel and private residences in Tokyo in two to three years. The first Armani hotel will open in Dubai in late 2008, followed by one in Milan in the second half of 2009.

HEY TEACH: About 30 students in the drama program at Chelsea High School in lower Manhattan had a substitute teacher Tuesday — and one they won’t forget. Kate Winslet slipped into the classroom, intently watched the students perform scenes from “Othello” and “Hamlet” and then ran an impromptu clinic on acting. For a full hour, the five-time Oscar nominee answered questions ranging from what characteristics and values a good actor needs, to how to balance motherhood and a showbiz career, to what it really was like to kiss Leonardo DiCaprio in “Titanic.” Her driving message to the students was that actors have to believe in themselves. “You have to believe you will get there because you will,” she said in closing. Winslet, who is the new face of Lancôme’s Tresor fragrance, was at the school participating in the program run by Epic Theatre Ensemble, a group sponsored by the L’Oréal-owned brand as part of its drive to involve disadvantaged children in the arts.

This story first appeared in the November 7, 2007 issue of WWD. Subscribe Today.

GOOD FORTUNE: Vengsarkar Budhu, who reportedly was swindled by Ron Smith out of $5,500 and a fashion show at the Hudson hotel in September, had much better luck in China. Last week, he won the bronze medal, representing Fashion Institute of Technology at the first Jia Hai Cup, an international fashion show held at the Shangri-La Hotel in Wuhan, China. Budhu competed against 40 contestants from such countries as Russia, South Africa, Malaysia, Indonesia and Taiwan.

An FIT graduate, Budhu was awarded “Designer of the Year,” the Reem Acra Critics’ Award, as well as the Saks Fifth Avenue women’s wear award upon his 2006 graduation. Second place went to U.S. designer Sergio Guadarrama, who designs his own line, Celestino, and was also representing FIT. He has shown the past three seasons during New York Fashion Week. The first-place winner was Asano, a Chinese designer.