Polo Ralph Lauren has found its new director of celebrity dressing in the magazine world. 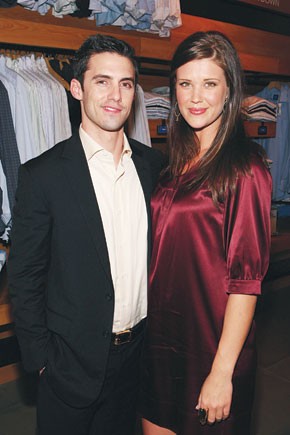 Everything to Know About Team USA’s Gymnastics Medalists So Far

CELEBRITY ARRIVAL: Polo Ralph Lauren has found its new director of celebrity dressing in the magazine world. Manhattan man-about-town Kimball Hastings will start in that role on Wednesday, joining from Teen Vogue, where he was a senior editor. Hastings had his own first-person column at Teen Vogue, wrote fashion features, dressed several celebrities and even had a few cameos on MTV’s hit reality show “The Hills.” Before that, he was online editor at Harper’s Bazaar. At Polo, Hastings will take over some of the responsibilities once held by Edward O’Sullivan, who left his gig as global senior director of celebrity dressing and entertainment last year and is now in a similar post at Missoni.

GUESS ROCKS THE MOVIES: Guess is no stranger to Hollywood, with its past ad campaigns featuring Drew Barrymore, Anna Nicole Smith and other PYTs as the Guess Girl. To kick off Condé Nast Media Group’s “Movies Rock” TV special, which airs on Friday, it channeled the Golden Age of Hollywood with a bash on Thursday night at St. Vibiana’s Cathedral in Los Angeles. Models tossed red and black boas over their delicate shoulders as they preened à la Rita Hayworth and Marilyn Monroe in six outfits from subbrand Marciano’s holiday collection. Meanwhile, pop star Kat DeLuna evoked a punk-rock flapper when she touched down on the red carpet in a white strapless dress custom-made for her by Marciano with an asymmetrical fringe of gold and silver chains. But for her kinetic performance to a bass-heavy beat in front of an audience including actress Olivia Wilde and Paul and Maurice Marciano, the 19-year-old Dominican Republic native changed into satin HotPants and a sequined bomber jacket from Marciano. “My outfit is the most important thing, besides the vocals,” DeLuna said.

DOVER STREET SANTA: Christmas came early to London’s Dover Street Market last week, when the store launched its “Sparkling Party” collection of limited edition gifts, with an evening of mulled wine and minced pies. Pieces in the collection include Liberty of London’s metallic leather clutch bags in pink and parrot green, Day-Glo Fred Perry polo shirts designed especially for the store and a collection of jewelry designed by Kawakubo for Chrome Hearts. To give the store an even more festive feel, artist Gary Card has created a kooky grotto for its front window: It’s a Chinese dragon piled with broken toys spray-painted gold. The fake entrance is stuffed with plaster casts of goblins’ heads. “He made it deliberately so you can’t go into it,” said Adrian Joffe. “It’s nice to have something that’s not just for children, but for adults, too.” Meanwhile, Comme des Garçons spread the Christmas spirit a little further Thursday, when the label opened a guerrilla store called 8 88 at Burlington Arcade, off Piccadilly. The store is named in honor of the label’s new fragrance — also called 8 88 — and carries 300 bottles of the scent, which doesn’t officially launch until March. The temporary store also will carry a selection of Comme des Garçons vintage T-shirts and past Comme des Garçons fragrances, until it closes Saturday.

MARTIN + OSA + L.A. = BIG SHOPPING: American Eagle Outfitters applied the retail formula yet again to Martin + Osa in Los Angeles on Wednesday, opening the 18th — and largest — store for its fashion brand catering to 28- to 40-year-olds at Westfield Century City mall. On the following night, it welcomed 250 guests, including actors Milo Ventimiglia from “Heroes,” Sarah Lancaster from “Chuck,” Alison Sweeney from “Days of Our Lives” and Sherry Stringfield from “Tell Me You Love Me,” at a cocktail reception benefiting Step Up Women’s Network. While snacking on mozzarella wrapped in prosciutto, guests eyed the wares in the 8,200-square-foot unit, which eclipses Martin + Osa’s average shop measuring between 5,200 and 6,200 square feet. Aware of Angelenos’ acute sensitivity to VIP treatment, not to mention talent agencies such as CAA that are headquartered nearby, store clerks offer complimentary Fiji bottled water and reply in a jiffy to a blue call button located inside the fitting rooms carved out of American cypress wood. “You don’t have to join a club to get that level of service,” said brand manager Leslie Ternes Smith.

SILLY WILLY: Those in the beauty business aren’t known to celebrate getting older. But on Thursday, modeling agency Wilhemina threw itself a wild 40th anniversary bash at the Angel Orensanz foundation on New York’s Lower East Side. Fergie, dressed in Dsquared, gave a provocative performance for guests including Gabriel Aubry, Justin Chambers, LL Cool J, Jamie Burke and Lance Bass. Petra Nemcova came straight from the New York Rangers game and switched out of her comfy turtleneck and bomber jacket into a more festive frock for the remainder of the evening.

FRILLY THINGS: La Perla, the Italian lingerie brand, will hold a cocktail party on Dec. 13 at its Madison Avenue store with a lively theme to celebrate its 54-year-old legacy: iconic lingerie items from more than 50 years of archives that have been curated by Valerie Steele, museum director at FIT. Select lingerie pieces will be displayed on models and styled by Kate Young. The items trace La Perla’s history from a small corsetry shop in Bologna, Italy, to its global presence as the $270 million La Perla SpA fashion enterprise with 63 boutiques worldwide. Hosting the event will be Helen Lee Schifter, Cristina Greeven Cuomo, Lisa Airan, Padma Lakshmi and Coralie Charriol, as well as La Perla chairman Alberto Masotti and Jeffrey H. Hansen and John C. Hansen, principals of La Perla’s new owner, JH Partners.

MAGASCHONI SALE: Expect Lorraine Bracco’s book editor character on Candace Bushnell’s upcoming “Lipstick Jungle” series to sport a black cashmere Magaschoni coat — but the actress is mum on which editor she’s channeling for the role. Bracco bought the coat, plus three other bags of gifts for herself and those on her Christmas list, Thursday morning at Magaschoni’s annual private sale, which typically raises about $50,000 for The Center for Discovery and other programs dedicated to helping children with disabilities. The cause hits close to home for Magaschoni head and benefit committee chair Monica Forman, whose son has autism. “Cashmere and luxury are synonymous,” Forman said, “but hope is the ultimate luxury.” Bracco was also on the committee, along with Lauren DuPont and Cristina Greeven Cuomo. Bracco donated to the raffle (“Sopranos” memorabilia, plus wine from the Bracco vineyard), as did Sophia Bush and Ashley Jones, who both pre-shopped the event earlier in the week.

MONICA, THE DANCER: After a successful stint in the States, “The Pursuit of Happyness” director Gabriele Muccino is back in his home country. The Italian premiered a short film he shot for Italian intimates brand Intimissimi Thursday night in Milan’s Teatro degli Arcimboldi, the satellite home of La Scala. Called “Heartango,” the 4-minute short, followed by a 30-second ad spot, features voluptuous brunette Monica Bellucci. The plot is a sensual pas de deux tango between a beautiful dance student, Bellucci, and her magnetic instructor, José Fidalgo, a Portuguese soap opera star. More than 600 people were expected to attend the premiere, including Bellucci and Muccino. The ad will run on Italian TV and in select movie theatres starting this week. Meanwhile, non-Italians can check out the short on Intimissimi’s Web site starting today, and maybe even pick up one or two sexy moves.

FABULOUS AT 40: Sir Norman Foster celebrated the 40th anniversary of his architecture business Tuesday night with a laid-back cocktail party at the British Museum. While others may have opted for a swanky, black-tie-and-endless-toasts affair, Foster took a more cerebral route. Guests, including John Pawson and Richard Rogers, Ruth Rogers, Julia Peyton-Jones, Hans Ulrich Obrist, William Cash and Elena Foster, grazed on dim sum and wandered through the museum’s latest blockbuster show, “The First Emperor: China’s Terracotta Army.” There was only one speech, made by Foster in the museum’s airy Great Court, which, incidentally, he designed himself.

“When I started Foster Associates in 1967 with my late wife, Wendy, there were two problems: There was no work — and there were no associates,” he told the crowd.

Times have certainly changed. Most recently, the private equity firm 3i took a stake in his company, which is now known as Foster and Partners. Foster also has high hopes for the future. “I think 40 is still quite a youthful age,” he said.

POWER LUNCH: His gowns might be red-carpet favorites, but Zac Posen’s latest effort is more appropriate for the playground. Posen, along with names such as Sir Elton John, Gwyneth Paltrow and Yoko Ono, has designed a lunch box for The Lunchbox Auction. The auction — which will benefit Food Bank for New York City and The Lunchbox Fund of South Africa — goes live Friday. Michael Stipe will host a party to kick off the bidding at the headquarters of Saatchi & Saatchi. Like the team of celebrities who designed them, each of the lunch boxes is distinct. John covered his creation with stickers of gnomes, a nod to his upcoming film project, “Gnomeo and Juliet.” Posen, meanwhile, borrowed from the world of rock ‘n’ roll. “It’s something [punk rocker] Exene Cervenka would have carried in the early Eighties,” the designer said of his studded metal design.

THE V&A’S NEW JEWELS: London’s Victoria & Albert Museum will unveil its new jewelry gallery on May 24 after a four-year renovation. The new gallery has been designed by the London-based Czech architect Eva Jiricna, whose past clients include Hugo Boss, Joseph, jeweler Boodles and Selfridges. The space, which will be known as the William and Judith Bollinger Gallery, will showcase 3,500 jewels spanning more than 3,000 years. The focus, however, will be on the last 800 years of European history, and there also will be a strong contemporary jewelry element.