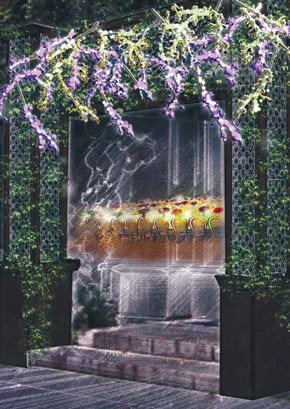 CFDA AWARDS LOWDOWN: Note to town cars — the new CFDA Fashion Awards format to be unveiled this coming Monday will also bring about a whole new set of changes to the run-of-show. In previous years, guests entered the cocktail hour via the New York Public Library’s Fifth Avenue entrance. This year, however, there will be no cocktails, so the entrance to the Celeste Bartos Forum, where the awards are being held, will be midblock on 42nd Street between Fifth and Sixth Avenues. Much has been said over the years about the length of the awards. Theater-style, this year’s ceremony is scheduled to begin promptly at 7:30 p.m. and end at 9. The following dinner at the Bryant Park Grill is scheduled to end by 11.

As for the decor, designer Raul Avila created a garden theme that incorporates multiple Swarovski elements, including two chandeliers from the Swarovski Crystal Palace collection: a “Cascade” design by Vincent Van Duysen that resembles a garden fountain replete with strands of falling crystals at the library’s side entrance and a crystal arch made of 10 “Blossom” branches by designer Tord Boontje at the restaurant. Those who couldn’t land an invitation can take in some of the activity from the Upstairs at the Library viewing party hosted by T-Mobile Sidekick, and, for the first time, at the Fashion Institute of Technology, where Target is hosting a simulcast for students.

WELL-HEELED: Jack McCollough and Lazaro Hernandez are about to offer a head-to-toe look. Proenza Schouler — which sold a 45 percent stake to Valentino Fashion Group SpA in July — has inked a licensing deal with shoe maven Giuseppe Zanotti to produce women’s shoes. A limited offering will be launched for resort sales, with the first complete collection bowing for spring 2009. Sales will be conducted out of the Proenza Schouler and the Vicini SpA showrooms in New York, Milan and Paris. Vicini was founded by Zanotti and his wife, Cinzia, in 1996.

MIU MIU MOMENT: It may be resort season for the fashion pack, but Miu Miu still managed to pack Tokyo’s Chateâu Restaurant Joël Robuchon for a recap of fall-winter. The Italian brand staged its first fashion show in Japan, inviting Rinko and Camilla Belle to grace the front row. Postshow, a lively after party spilled out into the restaurant’s garden as guests nibbled on mini rounds of foie gras and kicked back flutes of pink Champagne. Belle, who just wrapped filming on the coming-of-age drama “A’ Deriva” with Vincent Cassel in Brazil, was upbeat about her first trip to Tokyo and plotting to take in the street fashion of Harajuku on her last day in the city. “We’re dashing from place to place to try and see everything,” she said. “I can’t wait to come back.”

TIME IN: Mary J Blige, Eric Dane and Russell Simmons each have designed a limited edition Ernst Benz watch to benefit Chrysalis, the nonprofit association that helps men and women transition from poverty. The collection, dubbed Time for Change, will offer a numbered series of 24 watches per designer in honor of Chrysalis’ 24th anniversary. Renderings of the watches will be unveiled on May 31 at the 7th Annual Chrysalis Butterfly Ball in Los Angeles on Saturday. Fifty percent of the proceeds from each watch sold — which range from $4,000 to $22,000 — will go to Chrysalis. Several watches also will be auctioned off on eBay in June, while the remainder will hit stores in the fall.