Rumors are already aflutter in Cannes as to what Angelina Jolie will don for the premiere of Quentin Tarantino’s “Inglourious Basterds.” 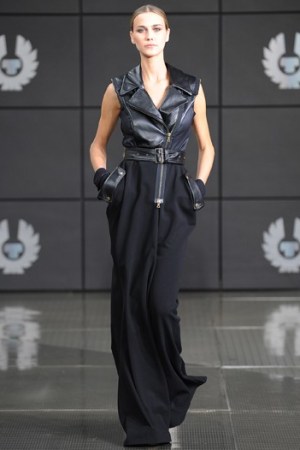 CRYSTAL CARPET: Rumors are already aflutter in Cannes as to what Angelina Jolie will don for the premiere of Quentin Tarantino’s “Inglourious Basterds” — in which Brad Pitt stars — on Wednesday. Word has it the working mom is considering a red-carpet dress by Belstaff, the brand behind the military-style jacket worn by her beau in the movie. Belstaff, which fetes its 85th anniversary this year, is sponsoring the film’s after party at the Baoli Beach, along with The Weinstein Co. and Universal. The jacket worn by Pitt in the film will be on display, along with a range of Belstaff pieces due to star in upcoming flicks, including “Amelia” with Hilary Swank and “Public Enemies,” starring Johnny Depp.

COCKTAILS AND KATE: Kate Spade threw a party last week to fete its new store concept. Bold, colorful stripes and campy decorative objects such as a rotary phone and record player now decorate its lower Fifth Avenue store, with other shops following suit in the coming months. Guests were Hula-hooping courtesy of free lessons and typing messages for the brand’s Twitter page on a vintage typewriter termed the “Tweeterwriter.” The store’s windows are decorated to encourage customers and those passing by to enjoy summer in the city with playful activities, such as renting a tandem bicycle or cocktailing outdoors. “The shop experience and assortment are the most dramatic and bold expression to date of where Kate Spade is going,” said William L. McComb, chief executive officer of Liz Claiborne Inc. “This is why we bought this brand and the store reset signals its future.”

HAMMER TIME: Hermès collectors will have a rare chance as hundreds of vintage handbags, watches, jewelry and accessories go under the hammer at Parisian auction house Artcurial Wednesday. The 766 items, which come from several private collections, range from leather belts and equestrian-themed scarves to a raspberry-colored crocodile Birkin bag estimated at 14,000 euros, or $18,900 at current exchange.

GETTING PERSONAL: Starting in June, Louis Vuitton will extend its “Mon Monogram” customization service, which was introduced last year, to its Pégase 55 suitcase’s classic and business versions. The service, which already exists for the house’s Monogram canvas Speedy handbag and Keepall travel bag and is available in 100 Louis Vuitton flagships worldwide, allows customers to personalize canvas. This can be done with up to three two-tone initials, vertical or diagonal stripes (or a combination of both) in a choice of 17 colors. Customers can visualize their design ideas through a computer simulation in-store. Fabrication takes from six to eight weeks.

PARSONS HONORS: “This woman is a David Bowie…a Mick Jagger,” remarked Betsey Johnson Thursday night at Parsons The New School for Design’s AAS Line Debut showcase for students in its Associate in Applied Science program. The designer, in pigtails, was on hand to award Fern Mallis the school’s first-ever AAS Icon Award. When guests got a little rowdy — free-flowing booze and coeds may not be the best event combo — Johnson wasn’t afraid to shush the crowd. “Shhh! Come on, kids,” she said, adding a quick “I’m looking to hire” that brought the audience to quiet attention. Other designers present included Jen Kao, who received the Stacey Nipps Alumni Award; Tom Scott and jeweler Eddie Borgo.