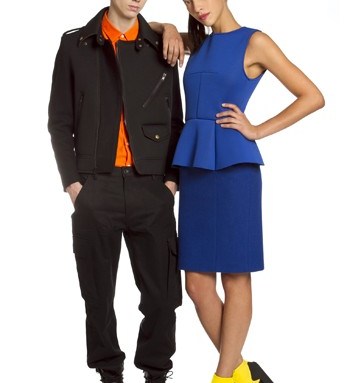 CYBER CHIC: By now, Opening Ceremony has sealed its reputation as the go-to outfit for quirky, geek-chic collaborations. So it should surprise no one that Disney Consumer Products, which has been on a push for fashion relevancy lately, sought out Humberto Leon and Carol Lim’s magic touch for the remake of the cult movie “Tron.” As it happened, Lim and Leon were huge “Tron” fans growing up and, thus, more than happy to design a capsule collection of “Tron: Legacy”-inspired clothes and accessories ($230-$575) that will be available at Opening Ceremony, Colette and Lane Crawford today, a month before the film, starring Olivia Wilde and Jeff Bridges, opens. Expect high-tech references. The women’s line includes bomber jackets with funnel necks, scuba shirts, and seamed leggings and dresses with laser-cut ring details. A Tulip dress and coat are meant to evoke the Light Cycle shape. Men’s wear features racer jackets and pants and a plethora of Tron’s signature neons: yellow, orange, blue and black. There are also two accessories, a neoprene sock boot and the Circle bag, done with Threeasfour, that’s an interpretation of the Identity Disc weapon, which presumably will mean something once you see the movie.

ALL ABOUT YOHJI: London’s Victoria and Albert Museum this coming spring will stage the first British solo exhibition celebrating the work of Japanese designer Yohji Yamamoto. The retrospective, which comes on the heels of previous solo shows in Florence, Paris and Antwerp, Belgium, in recent years, will feature for the first time items from Yamamoto’s men’s wear collection. Due to run from March 12 to July 10, the V&A exhibit will coincide with two displays at the Wapping Project, a center for the arts in East London located in a former hydraulic power station. The museum said some 80 pieces spanning Yamamoto’s 30-year career would be spread across spaces including its Renaissance sculpture gallery and an alcove overlooking the John Madejski garden.

FERRETTI’S TURN: Alberta Ferretti will be the guest of honor at Pitti Immagine Uomo, with a show on the first day of the fair, Jan. 11. A spokesman for Ferretti said around 30 specially created looks will be shown. Other designers set to show at the forthcoming fairs include Trussardi, as a special guest at the men’s trade fair Pitti Uomo, and British designer Gareth Pugh, who is gearing up for his first show in Italy at Pitti W.

RECORD-SETTING BAUBLE: A rare pink diamond has sold for more than $46.1 million at Sotheby’s Geneva, breaking a world record for a jewel sold at auction. The 24.78-karat diamond was purchased by Patti Wong, Sotheby’s chairman in Asia, on behalf of British diamond dealer Laurence Graff. “It is the most fabulous diamond I’ve seen,” Graff said. Four bidders competed for the gem, which had a presale estimated value of $27 million to $38 million.

Sotheby’s in New York on Dec. 9 will auction a “Magnificent Jewels” collection with an estimate of more than $40 million. The auction will begin with a single-owner sale from the estate of William B. Dietrich to benefit a foundation of the same name that funds art restoration and preservation. Highlights of the collection include diamond jewelry from Tiffany, JAR, Harry Winston, Van Cleef & Arpels and Carlo Giuliano. For the first time in 30 years, Sotheby’s will auction a jadeite bead necklace with beads dating from the Chinese Imperial Courts that has an estimated value of $2.2 million.

THE WEBSTER EXPANDS: The Webster Miami, the luxury landmark boutique and restaurant, will be relaunching its thewebstermiami.com Web site in early December, and the first e-commerce site on Dec. 15. The site, which is being created by Reflex New York, will feature brands such as Lanvin, Givenchy, Yves Saint Laurent, Balmain, Trussardi, Alexander Wang, Julien David, Tabit Simmons, Joseph Altuzarra, Olympia Le-Tan and Charlotte Olympia.

“A lot of people know about The Webster, but they may not be in Miami, so the Web site will help expand our presence,” said Laure Heriard Dubreuil, chief executive officer and a founding partner. She noted plans include expanding an existing database of 4,000 luxury customers from regions such as China and the Middle East. Future plans include the opening of a second boutique in New York by late 2011 or early 2012, said Heriard Dubreuil.

ITALIAN HONORS: Blumarine designer Anna Molinari, along with Brunello Cucinelli and Alessandro Benetton, has received the title of Cavaliere del Lavoro, one of the highest honors bestowed by the president of the Italian Republic. The ceremony takes place today at Palazzo del Quirinale, the president’s official residence in Rome. “I am extremely happy and proud of this important distinction…that confirms my constant dedication to my work and that crowns a lifetime dream, following my father Guido Molinari’s example, who, in 1958, received this same honor,” said Molinari.

SPRINGING UP: A.P.C. will be adding to its Paris retail network with a new store nestled between Gucci and Chanel on the tony Rue Royale at the foot of the Madeleine church. The hip fashion label, known for its basics and jeans, will open its eighth Parisian location in spring 2011.