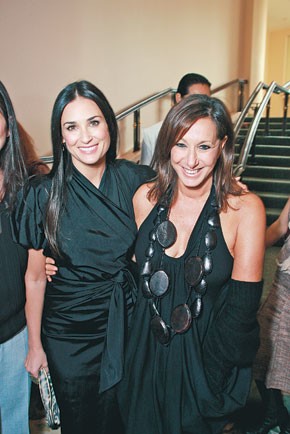 D&G BRICKS: It looks like Stefano Gabbana and Domenico Dolce are becoming savvy real estate moguls. According to sources, the designers have eyed a sprawling monastery that could sell for an estimated 26 million euros, or $38 million at current exchange, which is conveniently sandwiched between their Metropol show venue and the Via Goldoni headquarters in Milan. It’s unclear how they would use the space, though the idea of a hotel has floated, said a source. Dolce & Gabbana officials were unavailable for comment. Last year, the designers splurged to buy the former Residence Piave, next door to the Metropol, which is being transformed into showroom space.

Speaking of the Metropol, Canadian rock star Bryan Adams will hold an invitation-only gig at Dolce & Gabbana’s show venue on Sunday evening to promote his new acoustic album “11,” which comes out later this month. The event is the third of 11 concerts that Adams is playing in 11 different European cities in 11 days.

ZEN PALETTE: There were plenty of pastel suits and black Mercedes-Benz’s clogging the driveway of the Beverly Hills Hotel on Wednesday, but it wasn’t a typical Ladies Lunch hosted by the Women’s Guild of Cedars-Sinai. For starters, the guest of honor was Donna Karan, clad in a black cashmere tank dress and a matching necklace from Namibia. “I was just here,” said the designer, referring to the Oscar Week Havana Nights party she attended at the hotel. “New York, L.A., New York, L.A. — I can’t keep it straight.” Karan was receiving the Guild’s Woman of the 21st Century award for her creation of the Urban Zen Initiative with the goal of bringing Eastern wellness to Western medicine hospitals. “I’ve always dressed people, but now I feel it’s time to address them, to get into their hearts and souls,” she said. “I think we all realize material things are not where it’s at.” By Karan’s side was Demi Moore, who, along with husband Ashton Kutcher, is partnering with Karan for the Spirituality for Kids initiative. Also sharing in the glow were Catherine Keener, Emily Deschanel, Rashida Jones, Elizabeth Perkins, Becki Newton and Molly Sims. Before Karan took part in a panel with her “teachers,” physician and wellness guru Deepak Chopra and yogis Rodney Yee and Colleen Saidman Yee, the noisy room experienced a rare moment of silence when Saidman Yee led the nearly 400 guests in a mini meditation — during which only a few cell phones rang.

PRADA’S NEW SPACE?: Rumor has it Miuccia Prada and Patrizio Bertelli are zeroing in on a gargantuan space in Milan to showcase Fondazione Prada’s collection of contemporary art. According to sources, an announcement could be made as early as the Salone del Mobile design and furniture fair in April. It is understood that architect Rem Koolhaas already is lined up to design the gallery, which could be completed in the next two to three years. Germano Celant, the foundation’s artistic director, said last year the association was “looking at becoming increasingly more public,” and was searching for “exhibition spaces between 108,000 and 162,000 square feet.” These would help display large-scale works by artists such as Tom Sachs, Anish Kapoor, Carsten Höller, Francesco Vezzoli and Mariko Mori specifically created for the foundation, which was set up in 1995 and is privately funded by Prada and Bertelli. The foundation is based at Prada’s spaces in Milan’s Via Fogazzaro, which means its exhibitions are necessarily scheduled around the fashion house’s calendar and fashion shows.

GRAND HOTEL: “You can sit in the lobby of The Carlyle just for an hour and see the most interesting people walk through its doors,” said socialite and philanthropist Lynn Wyatt at a party she cohosted in the Empire Suite at the Upper East Side landmark Wednesday night to celebrate the launch of “The Carlyle,” written by Nick Foulkes with a forward by Wyatt. Guests took in views of the skyline while sharing some of their memories of the hotel.

Tory Burch remembered visiting The Carlyle with her father in her youth, while Michael Kors laughed over the memory of lying about his age just to see Bobby Short perform at the Cafe Carlyle when he was 14. “There is no place like it in the world,” he said. Kenny Jay Lane was in a chipper mood, having returned from a Caribbean getaway, and Barbara Tfank, who held her first fashion show at Bemelmans Bar, flew straight from Paris Fashion Week to join in the celebration.

“I still come here all the time,” said Barbara Walters. “Memories of the past are still in the present here.”

LAMBIE’S LUXURY MOMENT: Scottish artist Jim Lambie, whose works are beloved of the Hollywood set, has employed posters, album covers and household items in his art. He’s now moved into the wild world of luxury goods, and has just customized the latest Tod’s D-Bag. The turquoise bag is now ablaze with colored leather and metal strips, and was set to be auctioned off Thursday night in London at the Whitechapel Gallery’s annual Art Plus Film party and charity fund-raiser, hosted by Tod’s. In addition to raising money for the gallery’s education programs, the party was celebrating the reopening of the newly refurbished Tod’s store on Old Bond Street. The new-concept store features the full men’s and women’s footwear and accessories collections in addition to ready-to-wear.