One tall, wire-thin figure dressed all in black ? as emphatic as an explanation point ? sought another Wednesday night at the packed and dimly... 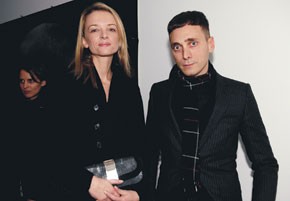 DARK MATTER: One tall, wire-thin figure dressed all in black — as emphatic as an explanation point — sought another Wednesday night at the packed and dimly lit Almine Rech Gallery in Paris. It was Betty Catroux in hot pursuit of the man of the moment, Hedi Slimane, who unveiled a solo exhibition, titled “Perfect Stranger.” “He’s like my twin,” Catroux said of Slimane. “I’m crazy about everything he touches.” Waves of fashion’s finest came to pay their respects, including Delphine Arnault, proving there’s no hard feelings between luxury giant LVMH and the former Dior Homme designer. “I really like what he’s doing,” Arnault said as she took in Slimane’s photos and sculptures, one a combination of cabaret lights and rumbling speakers.

Across town, Audrey Marnay, Joana Preiss, Marie-Josée Croze and Diane Kruger were among a flock of diamond-clad night owls who joined Karl Lagerfeld at the Chanel jewelry boutique on Place Vendôme to celebrate Mario Sorrenti’s portraits for French Vogue’s latest calendar. One had to wonder: Did Kruger’s borrowed comet necklace give her ideas for her holiday gift wish list? “That’s rather a loaded question,” said Kruger’s other half, Joshua Jackson. In fact, Kruger revealed she’s looking forward to a set of gray Egyptian-cotton bed sheets from her mother. “It’s for my new apartment in the 7th arrondissement,” she said. Smoky-eyed Chanel muse Anna Mouglalis said she’ll be sporting a set of fangs for her next movie role: a vampire. “The script is a love story that I wrote while I was expecting my child,” said Mouglalis, who cast her real-life partner Samuel Benchetrit, as the male lead.

This story first appeared in the November 30, 2007 issue of WWD. Subscribe Today.

SUPER SET: The next Costume Institute gala at the Metropolitan Museum of Art is likely to have a set worthy of the “Superheroes: Fashion and Fantasy” exhibit it kicks off. For the May 5 benefit, the Costume Institute tapped production designer Nathan Crowley, who made his mark creating the set for “Bram Stoker’s Dracula,” and was a production designer on such movies as Chris Nolan’s “Batman Begins” and “The Dark Night.” Crowley, who will also be a creative consultant on the exhibit, will be responsible for the design of the gala with Raul Avila. Giorgio Armani will serve as the night’s honorary chair, with cochairs George Clooney, Julia Roberts and Vogue editor in chief Anna Wintour.

CHLOE COMING: On Dec. 13, Chloé’s creative director Paulo Melim Andersson and president Ralph Toledano will pay Gotham a visit. The reason? Chloé is this year’s sponsor of the Artist’s Ball at the Guggenheim, which is usually the last big social event of the year before the holidays. Andersson and Toledano will serve as co-chairs of the evening, which will honor artist Ryan McGinley and feature a performance by Blonde Redhead.

BABY FACES: Carolina Herrera, Olivia Chantecaille and Marjorie Gubelmann were among those who gathered at Bergdorf Goodman on Wednesday night to fete New York’s most social jewelry duo — Amedeo Scognamiglio and Roberto Faraone Mennella — on the fifth anniversary of their company, Faraone Mennella by R.F.M.A.S. While the crowd perused the sinuous gold and gemstone jewelry, what had everyone reeling was a console filled with a melange of childhood photos of the designers. “He got to pick them,” said Scognamiglio, chiding his counterpart, Faraone Mennella. “It’s not fair,” he joked.