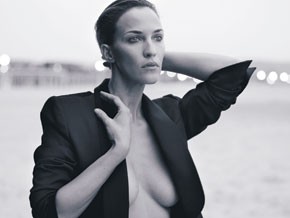 DEACON AND DIEGO?: It’s no secret that Gilles Deacon has been on Diego Della Valle’s radar for months now. First, industry sources said the Italian owner of the Tod’s, Hogan and Fay labels wanted the British designer for his Schiaparelli Collection. Now, it seems, Della Valle has other designs on Deacon. According to an industry source, Della Valle is talking with Deacon about designing Fay, his clothing label famous for its snazzy weatherproof overcoats, jackets and blazers. Although Deacon’s collections, which show in London, usually have a couture bent, the designer is also known for turning his hand to tailored clothing. He is a consultant for the British tailored clothing label Daks. A Della Valle spokeswoman declined comment and Deacon was traveling and could not be reached.

MOVING PICTURES: Fashion snapper Peter Lindbergh is preparing for the screening of his first film, “Everywhere at Once,” at the Tribeca Film Festival in February. The flick features 3,000 stills from Lindbergh’s photo archive spliced with excerpts from Tony Richardson’s “Mademoiselle,” starring Jeanne Moreau. The Grande Dame also provides the voice-over narrative. Lindbergh spoke about the project in Paris Monday night at a party to unveil a Miss France photo calendar he lensed in aid of French charity ELA, for sufferers of the brain disorder leukodystrophy. The event, held at the Fnac music store on Rue de Rennes, was sponsored by PPR and attended by group honcho François-Henri Pinault and YSL boss Valerie Hermann. “I’d never seen a Miss France before, but I was positively surprised,” said Lindbergh, surrounded by a gaggle of the former beauty queens. Meanwhile, Mario Sorrenti has done his own calendar for French Vogue, in partnership with Chanel fine jewelry.

A STICKY WEB: Designers may be all for expanding their presence on the Internet, but the Web can be a double-edged sword. On Tuesday, several London newspapers ran an image taken from Facebook of Giorgio Armani posing with Guede Rudy Hermann, a 20-year-old student from the Ivory Coast. Hermann was arrested in Germany this week after the murder this month of British student Meredith Kercher in Perugia, Italy. He is the fourth suspect to be arrested. Hermann had posted the shot of himself with Armani, taken outside the Armani/Nobu Bar in Milan, on his Facebook page. In response, the Giorgio Armani press office issued a statement saying: “The photo from Facebook.com depicting Mr. Giorgio Armani with Mr. Guede Rudy Hermann was taken as a tourist photo at Mr. Hermann’s request. Obviously, Mr. Armani has never known Mr. Hermann.”

TIS THE SEASON: “Who knew Santa was a woman?” a Carolina Herrera-clad Marlo Thomas asked the crowd Monday Night at the Saks Fifth Avenue holiday windows unveiling. Herrera, along with Josie Natori and Nanette Lepore, filed into bleachers outside Rockefeller Center for the annual festivities, which included an LED light show and a performance by American Ballet Theater dancers. An hour before the outdoor celebration, Heather Mnuchin, Marjorie Gubelmann and Christina Cuomo arrived (kiddies in tow) at the Charbonnel et Walker chocolate cafe on the top floor of the department store. Anne Hathaway and Lorraine Bracco treated pint-size party guests to a reading of “Snowpeople” by Rick and Ryan Zeeb — the inspiration for the store’s 2007 holiday windows. “Can we all use our most quiet voices?” Hathaway pleaded with the junior members of the audience — to little avail.

BON VOYAGE, FOREVER: The London clothing label Voyage is no more, and its founders have moved on. The Voyage store on Conduit Street in London, which opened in 2003, closed a month ago. This week, Louise Michielsens, who founded Voyage with her ex-husband Tiziano Mazzilli, opened Year Zero, a new label with its own store at 37 Beak Street in London. The new label is Michielsens’ first solo effort, and she’s being assisted by her son Rocky Mazzilli. It’s pitched at a lower price than Voyage — prices start at about 35 pounds, or $72 — and sells items including silk-screen T-shirts and hooded sweatshirts adorned with Swarovski crystals. “It’s for a new, younger generation of clients,” Mazzilli said. Meanwhile, the former Conduit Street shop has a sign in the window from bailiffs claiming 55,000 pounds, or $113,000, in unpaid rent. Mazzilli declined to comment.

MOURET TAKES SELFRIDGES: Roland Mouret’s debut collection under his new designing name, RM by the designer Roland Mouret, will get its own store — of sorts — this week. The designer has styled a pop-up shop that will open in Selfridges’ Superbrands area on the store’s second floor Friday, which will carry the sculptural dresses from Mouret’s spring capsule collection. Those who buy pieces from the store will also have the opportunity to win a one-off scarf, hand-painted by the artist James Webster, that was shown in the RM runway show in Paris in July. In addition to the London pop-up shop, the collection will also be sold at Selfridges’ Exchange Square store in Manchester beginning Monday.

ROAD TRIPPING WITH TORY: Yes, that was the designer Tory Burch buying one of her own pieces, a brown dotted silk and knit Tory Burch dickie, along with a black Marc by Marc Jacobs coat at Neiman Marcus on Michigan Avenue in Chicago Nov. 14. In town to christen her new Gold Coast store, Burch said the dickie from her fall collection sold out so she couldn’t find one for herself until spying one at Neiman’s.

It’s been that kind of moment for the designer, who said many of her freestanding stores are experiencing brisk sales, most notably those in Chicago and Dallas, where some customers asked her to sign their Reva ballet flats and handbags. Then Monday night, Burch greeted nearly 300 women who filled her Bal Harbour shop in Florida (Burch waited until now to visit so as to avoid hurricane season). She’ll be back home in New York for Thanksgiving and won’t hit the open highway — or airspace — again until mid-February when she opens a store in Las Vegas. “Women are relating to me on a lot of levels,” Burch said, noting mothers ask about how she started a new career after kids. “They think it’s too late. I say, ‘It’s never too late.’ I look at myself as a late bloomer.”

DOILLON’S DENIM: Lou Doillon swished into London club Maya Thursday night to host a party to fete the launch of her denim collection, Lou Doillon by Le Cooper. And sporting a silk top hat with a pair of ultra-high-waisted denim shorts from her line — which also includes skinny denim jackets and faded denim overalls — she cut a conspicuously stylish figure on the dance floor. But she was keen to point out she wasn’t just a walking billboard. “This is just for me,” she said of her choice of headgear. “You can’t buy it, but I asked them to make it for me for the collection.” Doillon, who’s the daughter of Jane Birkin and director Jacques Doillon, was joined by Kate Moss’ boyfriend Jamie Hince and singer Johnny Borrell at the Soho basement club. A crowd danced to remixes of David Bowie and Primal Scream tracks, spun by Boombox DJ Jerry Bouthier and Paul Weller’s son Nat. “I don’t know how this whole scene goes, I always stay with my cousins when I’m here,” admitted Doillon, surveying the crowd. “I guess I’ll find out tonight though.”

BURBERRY’S ART PROJECT: Burberry is cementing its links with the art world. The London-based luxury brand said Monday that it will be the sole sponsor of the National Portrait Gallery’s upcoming exhibition “Vanity Fair Portraits,” which opens Feb. 14.

The exhibition will feature the iconic portraits that have appeared in Vanity Fair’s pages since the magazine launched in its first incarnation, which was published from 1913 through 1936, including images of Albert Einstein, Charlie Chaplin and Jean Harlow. It will also spotlight portraits by photographers who have regularly shot for the magazine since its revival in 1983, including Annie Leibovitz, Helmut Newton, Mario Testino and Bruce Weber. “It is a great privilege to be able to continue the Burberry history of supporting the arts,” said Christopher Bailey, creative director of Burberry. The exhibition will run through May 26, and Burberry and Vanity Fair will cohost an opening event for the exhibition Feb. 11, the company said.