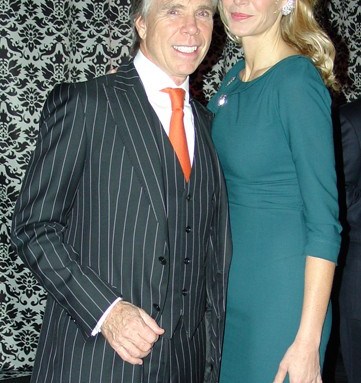 MACY’S RETURNS: Emeril Lagasse and Martha Stewart shared cooking duties last weekend as they helped Macy’s, where both sell products, open two stores in the New Orleans area. Lagasse whipped up corn chowder and Stewart focused on a vat of shrimp — tossing in some Cajun spices. Tommy Hilfiger also flew in for the occasion. Terry Lundgren, Macy Inc.’s chairman, president and chief executive officer, used the event to acknowledge the hardship endured by the city after Hurricane Katrina. The Macy’s at Esplanade Mall underwent a top-to-bottom renovation, and the retailer opened at Lakeside Shopping Center, replacing its space in a downtown New Orleans shopping mall that remains closed.

“No one has seen more pain and adversity than this American city,” Lundgren said. “I think the people here are a great example of how to get through difficult times. Three years ago we promised we’d be back and here we are — back with a vengeance with two new stores.”

CHEER UP: Last Wednesday, the Park Avenue set donned their best daytime jewelry and chicest blouses to attend the Hope for Depression Research Foundation’s inaugural seminar and luncheon. Organizers swathed the Plaza’s ballroom in shades of yellow and set the tables with sunflower centerpieces and custom print yellow M&Ms. Guests including founder Audrey Gruss, Shoshanna Lonstein Gruss, Coralie Charriol Paul, Fernanda Niven and Samantha Rosen listened to Dr. Steven Roose’s lecture on “An Illness of Mind and Body.” (Actually listened may be too strong of a word. Once Roose broke out the bar graphs, he lost everyone.) The room was upbeat, if not a little lavish, for such a somber topic. “I’m not going to pass judgment, hopefully they’re making money,” said Alexandra Kerry, whose late mother Julia Thorne was a big supporter of depression research. Across the table, Lauren Bush lunched with her mother, Sharon. But Kerry, whose father lost the 2004 presidential election to Lauren Bush’s uncle, wasn’t nervous about her seatmate. “We’ve met a few times before but I don’t know if she’d even remember.”

Later, Linda Hamilton retold her harrowing life story and then guests departed with a hefty goodie bag. It wasn’t full of Prozac, but an Eric Javits visor, an Yvel pearl necklace, gift certificates for a blow-out and organic produce and a set of Cartier stationery.

RUGBY MAKES A MATCH: Ralph Lauren knows a thing or two about entrepreneurship — after all, he famously launched his business by hawking ties from the back of a car. So it’s only fitting that the designer has decided to do his first design collaboration as part of the new Match Rugby Fund, which benefits young social entrepreneurs. Tapped to kick off the venture were Blake Mycoskie of Tom’s Shoes and Lauren Bush, the longtime girlfriend of David Lauren and founder of FEED Project. Their limited edition creations were feted at the University Place Rugby store on Thursday night. A young crowd of fresh faces perused the burlap FEED bags and the Rugby-patterned shoes on offer (every pair purchased is matched by a pair given to a child in need, while proceeds from the bags go to the FEED Foundation). A Match Rugby shirt is also on sale, which benefits the Match Rugby Fund. Both designers expanded on hallmarks of the brand for their pieces: “Rugby does ‘create your own’ elements in their rugby shirts, so we took that idea and decided to make four extra FEED country patches to be sold separately,” explained Bush. Meanwhile, Mycoskie, who said sales at Rugby will provide children in Ethiopia with footwear, was just pleased to be working with Ralph Lauren. “I got to meet him last year,” he recounted. “It was one of the most exciting times of my life — to hang out with Ralph Lauren for an hour.”