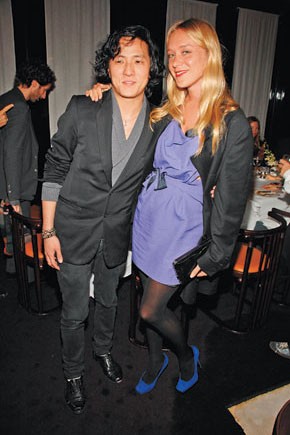 FILM FORUM: “Nothing is normal tonight,” proclaimed Julian Schnabel as he was swarmed by well-wishers congratulating him on the New York premiere of his latest film, “The Diving Bell and the Butterfly.” Pouring through the doors of Mr. Chow TriBeCa for a Gucci and Interview magazine-hosted dinner were famous friends like Jim Jarmusch, Harvey Keitel, Lou Reed, Adrien Brody, Matt Dillon, John Leguizamo and art world cohorts Mary Boone and Francesco Clemente. Despite the rave reviews from the crowd, don’t expect the newest hyphenates to be artists-turned-directors, however. “I’m sticking to paintings,” laughed Clemente. Meanwhile, the large Schnabel clan — Vito, Stella, Lola and younger brothers Cy and Olmo — palled around with Zac Posen and a late-arriving Chloë Sevigny.

The next day, the mainly French cast, which includes Mathieu Amalric, Marie-Josée Croze and Schnabel’s wife, Olatz, showed up surprisingly bright-eyed and bushy-tailed for a Peggy Siegal-masterminded luncheon in their honor at Brasserie Ruhlmann. (Emmanuelle Seigner, on the other hand, looked less thrilled to be there).

Schnabel was clearly still in director mode. “Excuse me!” he shouted at the unsuspecting diners lunching in the main part of the restaurant. “If you could please be quiet for five minutes, that would be beautiful and generous of you.” Though it had a momentary effect, it seems they didn’t take direction well — the hubbub arose again as Schnabel gave his speech.

SEA AND BE SEEN: Conan O’Brien, Amy Poehler and Alec Baldwin took a respite from picketing with the Writers Guild of America on Thursday evening at the gala at the American Museum of Natural History, which featured a performance by Tom Petty and the Heartbreakers. “Lorne [Michaels] has us go to these things every now and then,” said “Saturday Night Live” jokester Andy Samberg, who along with the rest of the show’s cast, seemed an odd fit with the older-moneyed crowd. Brian Williams, who hosted “SNL” two weeks earlier, yukked it up with Michaels and crew during the predinner cocktail hour. Has the anchor received any special treatment since his appearance? “I now get discounts on car rentals,” Williams joked.

Still, the glittery evening didn’t completely distract guests from the ongoing writers’ strike. “I’ve been out there supporting the working man,” Seth Meyers said of his days since taping of his late-night show stopped. For her part, Poehler also voiced her solidarity with the writers. “When the ocean goes on strike, we will be there too,” the petite comedian joked to the crowd during dinner in the museum’s Hall of Ocean Life.

Earlier in the week, Jamee Gregory and Muffie Potter Aston hosted their annual holiday party to benefit The Society of Memorial Sloan-Kettering. The ladies and their well-heeled friends filled the seventh floor of Bergdorf Goodman, where they auctioned off wreaths designed by pals such as Peter Marino and Charlotte Moss.

SO LANGE, FAREWELL: Now that she has sold her signature business for an estimated $55 million, Liz Lange is trying to treat herself to some R&R. At Friday’s Citymeals-on-Wheels’ Power Lunch for Women, the designer said she is working on a solo five-day getaway to Miraval Resort & Spa in Catalina, Ariz. “I want to go alone. I’ll be with my kids over Thanksgiving and leave that Sunday. That way I’ll be back for all the Christmas craziness.”

SEVEN’S DEBUT: Perhaps not all mankind showed up to Seven For All Mankind store’s opening party on Thursday night, but the crowd was thick despite a dizzying array of competing events in Los Angeles to tempt fashion revelers. Christina Milian skillfully danced to “Umbrella” between people and jeans aisles in tight Seven For All Mankind pants and a top by Roberto Cavalli for H&M. “They are just great for accentuating,” she said of Seven For All Mankind. “It [a pair of jeans] has got to fit the butt right. It can’t flatten it.” The standing-room-only mob of denim aficionados also included Jon Heder, Rashida Jones, Kelly Hu, Cory Kennedy and Rachel Zoe, who played host along with Condé Nast. Plenty stuck around past prime-time hours even after DJ Samantha Ronson abandoned her turntables and sped off in a Porsche Carrera.