It looks like Versace's Italian villa is up for sale. 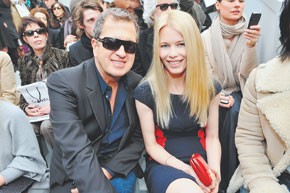 Isabel Marant Is Giving the Wedge Sneaker a Makeover

FOR SALE: It looks like Versace’s Italian villa is up for sale. WWD has learned from a source that the Versace family is in talks to vend Villa Le Fontanelle in Moltrasio on Lake Como to Australia’s Sunland Group Ltd., its partner in the Palazzo Versace hotel project. Sunland is believed to be interested in renting out the 18th-century mansion to the super rich rather than developing it into a hotel, the source said. Versace declined to comment Friday and Sunland would not return phone calls at press time. A Como-based real estate agent said the residence could “easily” fetch 20 million euros, or $30 million at current exchange, to 25 million euros, or $38 million, but that following the recent influx of new money to the area, in particular from Russia, a price two or three times that figure was not unfeasible. While a favorite haunt of artists, writers and aristocrats for centuries, Como has soared in popularity since George Clooney bought his 18th-century villa down the shoreline in Laglio in 2002.

Versace’s Villa Le Fontanelle has hosted celebrities ever since Gianni Versace bought and restored it in the late Seventies. Madonna, Elton John, Sting, Sylvester Stallone and Jennifer Lopez have stayed there, while Patrick Dempsey, star of “Grey’s Anatomy” and Versace’s spring men’s wear campaign, was a recent guest. The Queensland-based Sunland Group has a license agreement with the Italian fashion company to build 15 resorts under the Palazzo Versace brand. The first opened on the Gold Coast, Australia, in 2000 and a second is under construction in Dubai and scheduled for completion next year.

WORK IN PROGRESS: Filmmaker Sofia Coppola is at work again after a year hiatus to nurture her daughter, Romy. “I’m just getting going,” said Coppola at Martine Sitbon’s Rue du Mail show on Friday. “I’m doing a script. You know how writers are: It takes time.” French actor Gaspard Ulliel said he’s back in Paris for a couple of days after three months filming in Cambodia and another two months in Israel. “I’m leaving next week for Burgundy to start ‘The Vintner’s Luck,'” said the actor of the Niki Caro-directed film based on the novel of the same name. “I play the angel.”

BLACK GOLD: Just in time for the season’s reemergence of the little black dress, Givenchy trotted out its recently acquired jewel for the christening of its new Paris store Thursday night: the original dress worn by Audrey Hepburn in “Breakfast at Tiffany’s.” The immaculate sleeveless gown, which was bagged by the house at a London Christie’s sale at the end of 2006 for a Holly Golightly-pleasing $811,800, was displayed on Hepburn’s original bust — and surveyed carefully by bodyguards.

PICTURE THIS: Patrick Demarchelier will have a retrospective exhibit at Paris’ Petit Palais in September. The photographer said he is busy preparing for the show, which will feature some 450 pieces. “It will include recent work,” he noted.

DIAMOND EYES: Ann Demeulemeester is ramping up her fine jewelry business. The Belgian designer just inked a deal with Antwerp diamond company Trau Bros. to develop fine jewelry. Some of the fruits of that collaboration were shown on the runway last week, including diamond earrings. But Demeulemeester plans to design a more complete collection soon.

HEAVY METAL: Emulating Karl Lagerfeld, perhaps, Mary-Kate Olsen showed up at Chanel Friday sporting a number of chunky rings, among which were some square-cut gold designs by Enigma. “I got these at Maxfield,” she said, flashing two curling silver snake rings.

Anna Mouglalis said she’s gearing up for the Chanel-organized premiere of her latest flick, “I Always Wanted to Be a Gangster,” on March 19 in Paris. She plays a wayward waitress in the movie, directed by her beau, Samuel Benchetrit.

Claudia Schiffer, meanwhile, in addition to her gig for Chanel, said she was preparing for a Ferragamo campaign that will be shot by Mario Testino in Naples. “Other than that, I’m busy with family matters: the play dates, the tennis lessons, the usual,” she said.

MILKY WAY: As part of its ongoing 21st birthday celebration, Costume National kicked off its new unisex fragrance, dubbed 21, at its Rue Cambon store Wednesday night. “The fragrance contains 21 ingredients, from milk to orange blossom and saffron,” explained designer Ennio Capasa. The scent, which comes in a sleek, white-lacquered flacon, is the house’s first to be created with its new fragrance license holder, Beauty San.

Guests at the party, including actress Moran Atias, prima ballerina Eleonora Abbagnato, plus music producer and singer Ryan Leslie, sipped coconut milk-flavored cocktails. Leslie, whose first single, “Diamond Girl,” was released two months ago, is scouting video locations in Paris for his upcoming album, “The Maniacal Musical Mind of Ryan Leslie,” due out in June and featuring a remix by 50 Cent. “I’m a musical maniac,” he said. Leslie disclosed he had an ulterior motive for attending Rihanna’s concert at the Swarovski party Thursday. “We need a very big piece [of crystal] for my new video,” he said. “We don’t care if it’s real, as long as it shines.”

BACKING BARACK: With the pivotal Texas primary looming on Tuesday, graphic artist Shepard Fairey is giving some street cred to Sen. Barack Obama. Joining forces with apparel line Upper Playground and political volunteer group The 008, Fairey produced a slew of visually arresting T-shirts emblazoned with the Democratic presidential candidate’s portrait floating above the word “hope” or “progress.” Fairey — who is popular among youths for not only his André the Giant and other provocative street images, but also for his art magazine, Swindle, and Obey sportswear line — originally designed the portrait for a limited edition of posters early last month. After becoming collectibles, the posters inspired the T-shirts, which are on sale for $25 at Upper Playground’s stores and Web site. All proceeds will go to Obama’s campaign.

“[Fairey’s] art resonates so deeply because the graphic simplicity of the illustration connects with Obama’s clear message of hope,” said Yosi Sergant, a founding partner of The 008. “People are excited by this. They are hungry for a change in political dialogue. Shepard’s image captures that.”