The designer has collaborated with Stubbs & Wootton for a line of the preppy footwear maker’s classic men’s slippers. 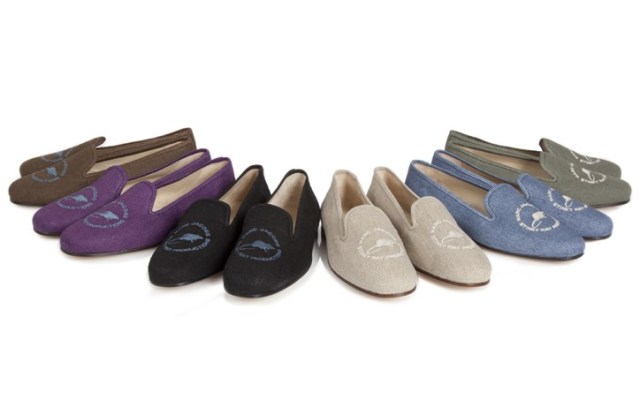 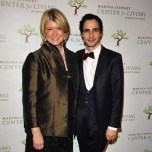 MARC GOES PREP: Marc Jacobs has collaborated with Stubbs & Wootton for a line of the preppy footwear maker’s classic men’s slippers adorned with Jacobs’ “Stinky Rat” logo. The $495 designs hit U.S. Marc Jacobs boutiques and e-commerce site this week, expanding to European stores in December. The Stinky Rat logo first launched on Marc Jacobs product in 2001. The shoes, available in six colors, are under the Jacobs by Marc Jacobs label, which is comprised of other special items like key chains and surfboards.

FRENCH CONNECTION: Friends and family of Vladimir Restoin Roitfeld gathered in London Thursday night for the opening of a show of Richard Hambleton’s work at a space known as The Dairy. Guests included Vladimir’s proud mama and papa, Carine Roitfeld and Sisley Restoin, Giovanna Battaglia, David Walliams, Lara Stone, Imogen Poots, and Roberta Armani, whose company sponsored the show. “He wasn’t a particularly artistic child — he was more turned on to football, and I never took him to museums,” said Roitfeld of her son, who’s already taken the show to Milan and New York. Roitfeld said her husband was the leader of her family pack. “He’s been everyone’s mentor. But you won’t see a lot of pictures of him. He likes to stay in the background.” Vladimir, who was dressed in — what else? — an Armani suit, said his mother did not choose his outfit for the occasion. “She dressed me until I was about 12 or 13 — when it was still easy,” he said.

HINDMARCH AT THE BFC: The British Fashion Council has named accessories designer Anya Hindmarch as a non-executive director, the organization said Monday. Hindmarch replaces Hilary Riva, who stepped down from the role in October. Before that, Riva had served as chief executive officer of the BFC since 2005. Hindmarch will sit on the board alongside Harold Tillman, chairman of the BFC; Caroline Rush, ceo; Simon Ward, chief operating officer, and Chris Inman, treasurer.

Tillman said in a statement: “Anya…brings with her huge experience from both the design and retail sector and will be invaluable as we move forwards with our future plans.”

Hindmarch added: “I am looking forward to…being able to contribute to such an innovative and prestigious body.”

The appointment is the latest accolade for Hindmarch, who this month was named an ambassador for Britain’s coalition government, charged with promoting the U.K. in overseas markets.

KIM SHAPES UP: The toning-shoe craze has been propelled by the promise of a better backside. So it’s no mystery why Skechers USA Inc. has signed on Kim Kardashian, along with her mom, Kris Jenner, to be the faces of an advertising campaign for Shape-ups, its brand in the toning category. Even Kim’s sisters, Kourtney and Khloe Kardashian, have become Shape-ups converts to tighten their derrieres.

“We’re hoping our booties look like Kim’s,” Kourtney Kardashian said during a press conference Monday at the Beverly Wilshire hotel in Beverly Hills.

The Manhattan Beach, Calif.-based company’s share of the toning category has dipped from more than 80 percent to around 55 percent, and it is betting the Kardashian mother-daughter team will recharge its toning-shoe franchise. Exactly how the Shape-ups ads with the Kardashians, breaking in spring, will do was left unclear. “We have a lot of fun surprises in store,” teased Kim Kardashian at the presser. What about “Pros vs. Joes”-style competitions between the Kardashian twosome and other Shape-ups spokesmen Karl Malone, Kareem Abdul-Jabbar and Joe Montana? Perhaps that would be comeback-worthy.

IT’S A GOOD THING: The crafts department of Martha Stewart Living Omnimedia transformed the clerestory of the company’s offices in the Starrett-Lehigh Building for a gala dinner on Wednesday to support the Martha Stewart Center for Living at Mount Sinai hospital. “The practice of geriatric medicine is very important because of what I call the ‘silver tsunami,’ ” said the 69-year-old Martha Stewart of the 78 million Baby Boomers who begin turning 65 next year. “I’m all about living and not about dying.” The event honored bond mavens Jim and Alexandra Lebenthal, who were applauded by attendees such as Terry Lundgren, Zac Posen, Sirio Maccioni, Mario Buatta, Marjorie Gubelmann, Douglas Durst and Muffie Potter Aston. More than $600,000 was raised for the medical facility, including proceeds from a live auction in which Lydia Fenet of Christie’s sold two walk-on parts on Stewart’s daytime chatfest on the Hallmark Channel for $16,500 each. And what will Stewart be cooking on Thanksgiving? A meal live on the “Today” show — followed by time with her daughter, Alexis Stewart, and friends in Manhattan.

SPEED MASTER: Nobody can accuse Ralph Lauren of not sharing his toys. The American designer will lend 17 of his rare vintage cars to the Musée des Arts Décoratifs for an exhibition scheduled to run April 29 to Aug. 28. The show will include racing cars from the last eight decades, including a 1929 Bentley Blower — the car author Ian Fleming first chose for his James Bond character. Other highlights include the 1938 Bugatti Type 57SC Atlantic Coupe, one of only two left in existence. The idea for the exhibition came from a similar show at the Museum of Fine Arts in Boston in 2005. Lauren’s love of cars has been documented in a book, “Speed, Style, and Beauty: Cars from the Ralph Lauren Collection,” and a Discovery Channel documentary shot in high definition.

DYNAMIC DUO: Damiani teamed up with jewelry designer Ludovica Andreoni, wife of Ferrari president Luca Cordero di Montezemolo, to create a special collection consisting of three different lines. “Moon Drops” includes smart and easy pieces in which various shades of gold are matched with diamonds, precious gems and pearls. “Royal Fantasy” has a more luxurious attitude, with pavé diamond earrings, rings and bracelets, while pink gold and Australian pearls give an ultrafeminine touch to “Pearl Chic,” the most high-end of the three.

NEW COUNTRY: Urban Outfitters hopes to open its first French store in Paris next year, but local followers of the trendy retailer can already shop their favorite brands, thanks to its recently launched French Web site, urbanoutfitters.fr. Urban Outfitters has 19 stores across Europe in locations including London, Antwerp, Copenhagen, Dublin and Stockholm. French brands such as Surface to Air, Vanessa Bruno Athé and Paul and Joe Sister account for 23 percent of its total sales, a spokeswoman said.

DESIGNS ON THE BALLETS RUSSES: The London College of Fashion has partnered with the English National Ballet (which has revived the Ballets Russes’ repertoire in the past) and the Victoria and Albert Museum (which is holding the exhibition “Diaghilev and the Golden Age of the Ballets Russes”) to showcase LCF students’ designs. Students in LCF programs were given the brief to create everything from fashion clothing and costumes to stage settings inspired by the Ballets Russes. And Friday, dancers from the English National Ballet will perform at the V&A wearing the students’ pieces The dancers will perform a piece choreographed by the ENB’s Stina Quagebeur, also inspired by the Ballet Russes, to music composed by Philip Glass.

Rob Phillips, creative director of the LCF’s school of fashion design and technology, said: “[The students] have been able to immerse themselves in the fantasy and couture world of Diaghilev and let their imaginations and creativity take over. Through this project, unusually, we were able to bring together students from a range of disciplines…echoing the way in which Diaghilev himself worked.”