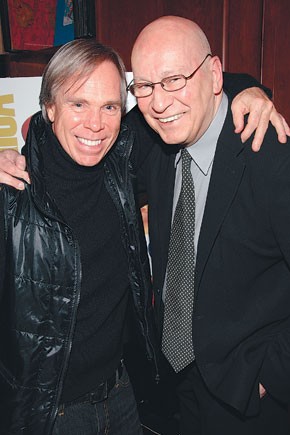 ICONIC TOMMY: Book signings aren’t new fare for designer and five-time author Tommy Hilfiger, nor for advertising legend George Lois, who’s penned seven. So for their joint book, “Iconic America: A Roller-Coaster Ride Through Eye-Popping Panorama of American Pop Culture,” the duo had a pro lineup Monday night. First, their publisher, Rizzoli, hosted a signing at its 57th Street bookstore, where some fans even brought all five of Hilfiger’s books for him to autograph. “This should be a history book in schools,” said Hilfiger, flipping through pages featuring the likes of a Playboy bunny staring at Marilyn Monroe’s curvy backside. “But by the time that gets approved, I’ll be in heaven — I don’t know where he’ll be,” he added, looking at his longtime friend Lois. Afterward, downtown at STK, André Balazs and GQ hosted a cocktail party, where Hilfiger clan members Andy and Ally joined up. Singer Kat DeLuna, whose second single comes out soon, was there with her new friend Richie Rich, as was Bill Pullman, currently starring on Broadway in Edward Albee’s “Peter & Jerry,” and a number of other Broadway actors, apparently taking advantage of their new free time during the writers’ strike.

WILD MAN BLUES: He’s best known for designing gowns and furs for a harem of adoring socials, but who knew Gilles Mendel had a rock alter ego? As lead guitarist for the Born Again Baldwins — a band formed by a group of friends with whom he shared a house in Water Mill, N.Y., this past summer — the J.Mendel designer gets to add another string to his Stratocaster. “This is my Woody Allen moment, when I go play lead guitar for a couple of hours and I’m Eric Clapton,” said Mendel, who first picked up the instrument as a teenager. “It’s my moment of fame.” So far, Mendel has yet to perform in public with the Born Again Baldwins. (Several of the members resemble the movie-star brothers, hence the name.) He was unavailable when they played a Nov. 3 gig at New York’s Espace, but there was plenty of social wattage that evening, even without him: Denise Rich, whose son-in-law Richard Kilstock plays guitar in the group, sang, and Donald Trump was in the audience. “These kids are very connected,” Mendel explained. “They asked Ron Perelman if he wanted to play the drums.” (He declined.) Their next booking is still up in the air, but Mendel put the kibosh on a Born Again Baldwins invasion of Bryant Park anytime soon: “I never really was a strong believer in putting a live band in a runway show,” he said. And the other members, who range from businessmen to lawyers, are not exactly fashion insiders. Mendel has, however, passed the bug on to his 13-year-old son. “He rocks,” the designer said with a laugh. “I bought him his first Fender guitar.”

This story first appeared in the November 14, 2007 issue of WWD. Subscribe Today.

MOMMY & ME: Chic Manhattan moms carted along their fashionable kin — and their respective nannies — to Hogan’s Spring Street store on Tuesday for a reading of Julianne Moore’s first children’s tome, “Freckleface Strawberry.” “Hey, grown-ups,” chided Moore to the mothers who had more trouble quieting down than their children. The event, cohosted by Vogue, turned the boutique’s private back room into a playroom rife with entertainment for the kids so moms such as Amanda Cutter, Sarah Wynter, Yvonne Force Villareal, Marisa Noel Brown, Cynthia Rowley and actress Kim Raver could socialize in peace and shop. And Moore is certainly making the rounds: she’ll give another private reading and book signing today at the Crewcuts on Prince Street. Moore, who has already optioned her second book “Freckleface Ball,” said a childhood friend inspired the books.

CRUSHED ICE: Madison Avenue was ablaze with flashbulb pops Monday night when Sir Elton John hosted the opening of the new Chopard boutique and brought with him an entourage that included Eva Herzigova, Daphne Guinness, Adrien Brody, Natasha Poly and Agyness Deyn. The evening kicked off with a drawn-out ceremony, during which a huge cake, designed in the likeness of the new shop, was presented by Chopard copresidents Caroline Gruosi-Scheufele and Karl-Friedrich Scheufele, and celebrities like Elton and Elizabeth Hurley, who had decamped to a makeshift VIP ward on the second floor, came down to mingle briefly with the other guests. After the cutting, they quickly retreated back upstairs, though Hurley graciously offered her jewelry predilections. “I’m an earring girl,” she said, sporting an enormous pair of Chopard chandelier gems. “But these aren’t mine, sadly.”

Rachel Weisz, meanwhile, refused to even talk about her own (most likely borrowed) Chopard bling. As cocktails wore on, the scene became increasingly crushed. In an attempt to avoid the massive stampede, Maggie Gyllenhaal gracefully made her way toward the VIP quarters. “I so rarely wear jewelry,” she admitted, though she showed off a diamond lattice bracelet. “I think it would feel differently if I’d purchased this, instead of checked it out from the library.”

The fashion frenzy even had Chopard U.S. president and chief executive officer Marc Hruschka in a state of bewilderment. “You know, sometimes you send out these invitations and you don’t know who’s gonna show up,” he laughed. “My team told me to stop inviting people. I said, ‘I’m not!'”

OUT THERE: Meryl Streep and Philip Seymour Hoffman came straight from the first day of shooting the movie version of “Doubt,” to the Christopher and Dana Reeve Foundation’s gala Monday night. “I’m sorry, I’m woefully underprepared,” demurred the actress at the podium as she accepted the Dana Reeve HOPE Award, before going on to recount her memories of the tireless paralysis activist. Robin Williams, a friend of Christopher Reeve’s from Juilliard, regaled the crowd, including the Reeve children Matthew, Alexandra and Wilbur; Barbara Walters, and co-chairs Diane Sawyer and Mike Nichols, with tales from their school days and beyond. “There go Mork and Superman,” Williams said fans would shout when they saw them on the street.

The fashion crowd, meanwhile, was represented by Gilles Mendel and Mary Alice Stephenson, who sat with Clark’s Botanicals president Francesco Clark, a former Harper’s Bazaar staffer who was just named new spokesman for the Reeve Foundation.

THE RETURN OF WESTWOOD: Could Vivienne Westwood be headed home to London in February? The designer, who’s been showing in Paris since the early Eighties, likely will unveil one or more of her fall 2008 collections at London Fashion Week in February, according to industry sources. If so, she’d be the latest in a string of celebrity designers — including Matthew Williamson, Stella McCartney, Luella Bartley and Marc Jacobs — to grace London’s catwalks in recent seasons. And, yes, there is method to her madness: The designer plans to launch “Vivienne Westwood Opus,” a coffee-table book of portraits she’s taken of celebs including Helena Bonham Carter, Naomi Campbell and Kate Moss. A spokeswoman for Westwood declined to comment.

LATE TO THE PARTY: Owen Wilson and art dealer Tony Shafrazi sure have been palling around a lot lately. First they hit the Guggenheim International gala together last week, and then on Monday night the duo went to Lincoln Center for a dinner celebrating the Rolex Mentor and Protégé Arts Initiative. Having arrived after the first course, the pair was led to a set of empty seats before being redirected at Stephen Baldwin’s request. “It is very important I know how long Owen is in town. I need to give him a copy of my book [“The Unusual Suspect”],” Baldwin said, insisting Wilson sit at his table. Staff obliged, seating Wilson and Shafrazi with Baldwin, Miss Teen USA, Miss USA and Miss Universe. Shafrazi proceeded to loudly gab on his cell phone during the brief film honoring Julie Taymor, while Wilson chatted up Miss Universe Riyo Mori and posed for a picture with her pageant colleagues. Their stay was brief. Wilson and Shafrazi left before dessert was served, as did others in the crowd, which included Martin Scorsese, Diane von Furstenberg, Derek Lam and Aidan Quinn.

KRIS CROSS: Kris Van Assche is putting the finishing touches on his team at Dior Homme. Sandrine Serre, a seven-year veteran at Dries Van Noten in Paris, will join him as director of press relations, effective mid-December. She reports to Olivier Bialobos, Dior’s international director of press and public relations.