Zhang Ziyi will be putting away her swords and flexing her funny bone in her next picture, "Lost for Words." 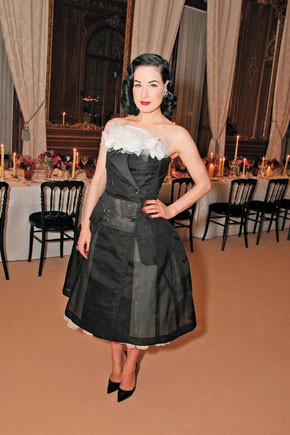 IN CHARACTER: Zhang Ziyi will be putting away her swords and flexing her funny bone in her next picture, “Lost for Words.” “It’s a romantic comedy with Hugh Grant. We’re shooting in London,” she said Sunday night at Louis Vuitton’s dinner for the dressy Emprise watch designed by Marc Jacobs. But the role won’t be much of a stretch: “I play a Chinese movie star,” Ziyi said with a laugh.

Indian star Shilpa Shetty won’t have to dig deep for her next part, either. She’ll play an actress in the Bollywood production “The Man.” Shetty, who has just endorsed a signature perfume, said she’s perplexed by the whole fame game. “Celebrities come up with their own fragrances and people buy them. Quite strange,” she said with a shrug.

Before sitting down to a meal of truffle risotto and roasted sea bass, retired Japanese soccer hero Hidetoshi Nakata, just back from a month in Africa, said he’ll soon be back on the pitch. He’s organizing a charity gala in Tokyo in June with himself and other star kickers. “It’ll be Japan against the rest of the world,” he said.

LET’S GO CRAZY: Mischa Barton, who strolled into Sunday night’s Miu Miu show looking very put-together in a purple off-the-shoulder dress, her hair piled neatly on her head, had fun unraveling in her forthcoming thriller, “Homecoming.” “I play a crazy person, to put it bluntly,” she said. “It’s sort of like ‘Misery,’ but younger.”

Chloë Sevigny, who kicked off her DJ set at Colette over the weekend with The Cramps, said she was heading back to the States to resume shooting “Big Love,” as well as a new film also starring Patrick Wilson and Judy Greer. She was shy about details, but said it’s set in the present day and her character is “kind of sassy, which is good, because I never get to be sexy!”

A ROYAL TEE?: Was Prince Harry making a political fashion statement when he returned from serving in Afghanistan Saturday wearing a T-shirt emblazoned with the words “Taliban Hill Fighter”? To some observers, it clearly looked like a spoof on the American designer, Tommy Hilfiger. Reached for comment about a photo of the prince that appeared in the Sunday Times of London, Hilfiger said he hadn’t seen the T-shirt, and therefore couldn’t discuss it. The 23-year-old prince had to cut his military mission to Afghanistan short and return home when the media caught wind of his whereabouts. Prince Harry had served 10 weeks as a soldier, and his role was to pinpoint Taliban positions for ground-attack aircraft.

FULLY BOOKED: Karl Lagerfeld’s bookshop was abuzz with jubilant, if weary, fashion folk, Sunday night. Sonia Rykiel, Vanessa Seward, Jean Paul Gaultier, Martine Sitbon and Alber Elbaz were among the designers who came to check out a new 7L tome about Numero’s editor in chief, Babeth Djian, titled “Babeth, by Babeth Djian.” “It went very smoothly, only it took a long time and you know how I hate that,” muttered Lagerfeld.

Elbaz, meanwhile, leaned his head on the nearest shoulder: “All I want is to be in bed with somebody bringing me food,” he sighed.

LAST DANCE: Miuccia Prada’s party at Castel Sunday night attracted some former stars of her Miu Miu campaigns, including Chloë Sevigny and Maggie Gyllenhaal, along with hordes of assorted fashion folk. Givenchy’s Riccardo Tisci said he’ll be jetting off to Tulum in Mexico to soak up some sun, while all Jessica Stam had in view was “a three-hour massage.”

“My week’s highlight had to be the McQueen show — it was magical,” said a smoky-eyed Lily Donaldson, while more humdrum exploits were on Lara Stone’s mind.

“It may sound silly, but all I’m looking forward to is getting back to doing my laundry — a bit of normalcy,” she said, heading for the exit.