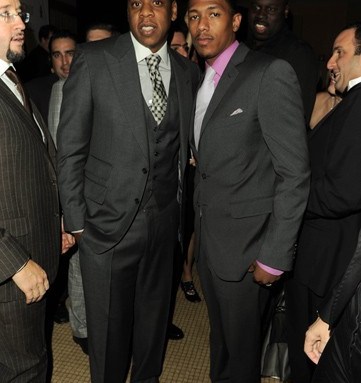 JAY-Z AND FRIENDS: Jay-Z, Vanessa Williams, Kelsey Grammer and Nick Cannon were among the celebrities at Audemars Piguet’s auction of 12 watches on Monday night to raise money for Broadway Cares Equity Fights AIDS. Before auctioning his personalized Audemars Piguet watch, Jay-Z said, “Hi, everyone, I kind of don’t want to part with this. So I hope it goes [for a small amount] so I can bid on it.” Jay-Z lost that battle, however, handing over the timepiece for $220,000. Williams, who is appearing in “Sondheim on Sondheim,” presented her signed Lady Jules Audemars model for auction. Audemars Piguet chief executive officer Francois-Henry Bennahmias made sure to encourage the bidding. The auction at the Four Seasons hotel raised $816,000.

IKRAM EXPANSION?: Chicago boutique owner Ikram Goldman , who is considered First Lady Michelle Obama ‘s unofficial stylist, is said to be eyeing locations for a larger flagship. Goldman declined comment, but a source said she is in negotiations for a 10,000- to 12,000-square-foot space to feature men’s and women’s apparel, as well as a cafe, on Huron Street between Wabash and State Streets. Goldman’s current store, Ikram, is located at 873 North Rush Street.

ACKERMANN’S MAN: Haider Ackermann , the Paris-based designer known for his evocative draping and somber aesthetic, is venturing into new territory: men’s wear. Ackermann, who was tapped to headline the Pitti W trade show in Florence in June, will also unveil his first men’s looks during the show. “We’re searching for the man behind the Ackermann woman. It’s just a start,” said Ackermann, who attended a lunch at the Hôtel de Crillon in Paris on Tuesday organized by Raffaello Napoleone , chief executive officer of Pitti Immagine. Ackermann said elements of men’s wear would be commercialized next season, but declined to provide further details. “I find it harder to design men’s wear. Women’s wear is something I fantasize, but with men’s wear, you are comparing it to yourself. I am the consumer,” he mused. Ackermann will unveil his lineup on June 16 at the Palazzo Corsini in Florence.

IT’S ALL GREEK: To promote their upcoming Universal Pictures comedy “Get Him to the Greek,” Jonah Hill and Russell Brand will hang out in the window of Diesel’s Fifth Avenue flagship this afternoon. The duo will be interviewed by E network reporter Ben Lyons , who will air the chat fest on his “Daily 10” show on Thursday. Diesel:U:Music is sponsoring the event and will distribute T-shirts, “Get Him to the Greek” soundtrack samplers and passes to the film, which opens June 4.

MADE BY JADE: Guerlain has signed Jade Jagger to update its 85-year-old Shalimar bottle. “Guerlain has a history of signing talented artists for projects, and Jade’s jewelry designs have a wide following,” said Linda Maiocco , senior vice president of marketing and public relations for Guerlain in the U.S. “It also didn’t hurt that Jade’s mother, Bianca , is a fan of Mitsouko [another Guerlain fragrance].” The new bottle, out in September, features a pedestal base, a fan-shaped bottle with clean lines and a smoky gray-blue cap. Jagger chose to finish the bottle with a deep-navy leather tie on its neck.

GOALS FOR A GOOD CAUSE: On Saturday, some of the biggest names in the fashion industry will lace up once again to participate in a charity soccer match against the Genoa All Star Alumni team in order to raise money for the National Institute for Cancer Research of Genoa and the Stefano Borgonovo Foundation, which is dedicated to battling amyotrophic lateral sclerosis (also known as Lou Gehrig’s disease). Borgonovo, a former Italian soccer player who has ALS himself, will be the coach of the Nazionale Stilisti (the Italian designer team), consisting of regulars Lapo Elkann of Italia Independent, Diesel founder and chief executive officer R enzo Rosso, Santo Versace, Beatrice Trussardi, Ippolito Etro and others. They will face the challenge of beating old-time soccer greats such as Pato Aguilera, Stefano Eranio, Tomas Scuravi and Gennaro Ruotolo . The annual event, now in its 10th edition, coincides with the 99th anniversary of the historic Luigi Ferraris stadium in Genoa where it is taking place and will be followed by a fund-raising dinner for 400 people.

A GOOD PLACE TIBI IN: Tibi is out to bolster its Facebook presence, so the contemporary brand launched a “Summer Giveaway Package” on May 3 with the goal of doubling the amount of fans it has on the social networking site by June 15. And it’s already almost there: In a little over two weeks, Tibi’s gone from 2,394 fans on April 30 to 4,315 on May 18. The contest, available to users with 20 or more friends who are followers of Tibi, offers users a chance to win two swimsuits, two cover-ups and a dress. A winner will be picked at random on June 16. With the exception of Tory Burch, Diane von Furstenberg and Nanette Lepore — who boast 45,017, 47,583 and 5,042 fans, respectively — Tibi is ahead of its contemporaries in terms of Facebook followers. Alice + Olivia has 816, Cynthia Steffe has 1,147, Shoshanna has 1,211, Cynthia Rowley has 1,364, Milly has 1,693, Rebecca Taylor has 1,885, Trina Turk has 2,643, Jill Stuart has 3,576 and Elizabeth & James has 3,346.