Duran Duran is about to get Juicy. The iconic rock band has teamed up with Juicy Couture (band member John Taylor is married to Juicy co-founder Gela Nash-Taylor) to design a full wardrobe for their Broadway concert debut in New York. 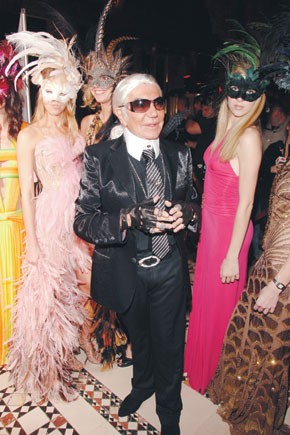 JUICY OPENING: Duran Duran is about to get Juicy. The iconic rock band has teamed up with Juicy Couture (band member John Taylor is married to Juicy co-founder Gela Nash-Taylor) to design a full wardrobe for their Broadway concert debut in New York. The band will perform from tonight until Nov. 12 at the famed Ethel Barrymore Theater to support their new album, “Red Carpet Massacre.” They plan to play the entire new album each night, a first for the band. They will also play some of their classic hits. “When putting together the Broadway show of ‘Red Carpet Massacre’ it was only natural that we would turn to Juicy Couture,” Taylor said. “Due to more than just osmosis; Simon [Le Bon], Nick [Rhodes] and myself have all had a hand in making design suggestions for clothes they would like to wear and seeing their ideas realized. In attacking the costuming of the show we have had a hands-on approach, which is the way we like to work (like the good little renaissance boys we are). ‘Red Carpet Massacre’ requires Maoist utility wear, punk-savant/bohemian and louche satins… all in one evening.” For opening night, Ashley Olsen, Donald Trump, Padma Lakshmi, Moby and Natasha Bedingfield are expected to attend.

OSSIE CLARK’S NEW LIFE: The house of Ossie Clark is back in action. Marc Worth, founder of WGSN, will relaunch the brand in February at London Fashion Week, according to a spokesman. The Ossie Clark creative team includes Avsh Alom Gur, who has worked at Donna Karan, Roberto Cavalli, Chloé, and Nicole Farhi. Clark’s heyday was the Sixties and early Seventies, and he was best known for his tailoring, which was often coupled with romantic prints by his then-wife Celia Birtwell. Once known as “King of the King’s Road,” Clark’s fluid, bias-cut shapes were distinctive with their full sleeves, swingy skirts and scoop necks. He was a colorful character in Swinging Sixties London, and was immortalized by David Hockney in the 1970 painting “Mr. and Mrs. Clark and Percy.” Clark was murdered in 1996 by his former lover. A few years ago London’s Victoria and Albert Museum held a mini retrospective of his work that ran from July 2003 until May 2004. Guests at the opening party included Kate Moss, Manolo Blahnik, Marianne Faithful, David Hockney and Zandra Rhodes.

This story first appeared in the November 2, 2007 issue of WWD. Subscribe Today.

A COSTUMED KARL: At Roberto Cavalli’s Halloween party at Cipriani 42 Wednesday night, one woman came as Josephine Baker in the famous banana skirt. Another came as Marie Antoinette. Julia Restoin Roitfeld was a leopard, Tinsley Mortimer was an angel and the designer himself showed up as Karl Lagerfeld. “I wanted to go as someone from the world of fashion,” he said with a shrug, after directing a slew of well-wishers to kiss his hand, on which he wore a copy of the French couturier’s fingerless glove. But if there’d been a prize for best costume, it would definitely have gone to Christine Schwarzman, the wife of private equity honcho Stephen Schwarzman. With her husband out of town on business, she came outfitted as Victoria Beckham, complete with a cardboard cutout of the former Spice Girl’s soccer-playing hubby. “I got it on the Internet for $70,” she said. “He’s really good in bed. Although it’s always vertical or horizontal with him.”

SINGING FOR SUPPER: Lenny Kravitz rocked Cipriani Wall Street Tuesday night at the Cipriani Wall Street Concert Series benefiting UNICEF and The Sarah Ferguson Foundation. Sean “Diddy” Combs, Jeff Gordon, Roberto Cavalli, Russell Simmons, Damon Dash and Giuseppe Cipriani were all in attendance, which was hosted by Lucy Liu, who’s served as an ambassador for UNICEF the past four years. A native New Yorker, Liu has been busy filming in the city for her new ABC series “Cashmere Mafia,” as well as three films, including “Watching the Detectives” with Cillian Murphy, a romantic comedy scheduled to come out in time for Valentine’s Day. Cavalli gave Kravitz high marks as a designer. “He’s a real talent. I think he could help me design something,” he joked. Not only is Kravitz busy in the design world, but the rocker is also opening a new lounge at the Miami Beach’s Delano with Art Basel Miami Beach and working on the upcoming February release of his album “It Is Time for a Love Revolution.” “It’s about us, this world. It’s time for a love revolution and time for us to step it up and spread more love,” said Kravitz.Another project Kravitz is working on is his clothing line, which he plans on unveiling in the next year. “It’s taking me a lot of time because I’m juggling music and film, but it’s definitely going to happen,” said Kravitz.

PRETTY AS A PICTURE?: Since nothing can be published in peace without a requisite book signing, Hamish Bowles donned one of his many hats Monday night and acted as proud author of “Vogue Living: Houses, Gardens, People” at the Calvin Klein store on Madison Avenue. As people lined up to buy the aspirational tome — including Delphine and Reed Krakoff, whose home is included in the 400 pages — Bowles admitted his own apartment was “undisciplined.” “It’s very Cecil Beaton, very dense, very cluttered,” he said. Same goes for Calvin Klein designer Francisco Costa, whose Bellport, N.Y., home (or at least its outside) is featured in this issue of “Vogue Living.”

“I’m so happy they didn’t shoot inside,” he said, feigning stress. “My house in Bellport is a mess. But my New York apartment is very tailored.”

BIG SALE: The host committee for next week’s Fashion For Action bash reads like a Who’s Who of young New York fashion, including the likes of Jane Mayle, Charlotte Ronson, Adam Lippes and Shoshana Lowenstein. The benefit, to take place at The Rubin Museum of Art on Nov. 8, is in aid of Housing Works, and will feature a silent auction of clothes donated by such designers and brands as Marc Jacobs, Prada, Michael Kors, Narciso Rodriguez, Bottega Veneta, Diane von Furstenberg, Elie Tahari, Fendi and Giorgio Armani. Those who can’t make the gala, which will be hosted by Rashida Jones, need not fret. The designer sample sale will continue Nov. 9 to 11 at the Housing Works Chelsea Thrift Shop. Fashion for Action raised $350,000 last year, and the aim is to bring that number to $500,000 this year.

JEWELS FOR JOES: Evan Yurman welcomed pals Mary-Kate Olsen, Mini Anden, Jacquetta Wheeler, Jeremy Piven and Kate Sumner to dinner and a concert by The Bravery at the Paramour Mansion in L.A.’s Silver Lake last week to celebrate the launch of his men’s jewelry and watch collection for David Yurman. Like his dad, he finds inspiration everywhere. “I get inspired by myriad things: personal interests, rare stones, different textures….I keep an open mind and look for the unexpected in my everyday life,” he said. Yurman chose to host an event in Los Angeles because of the support of the local community — and because Hollywood men like Piven aren’t afraid to accessorize. “Men in L.A. understand jewelry, which is a testament to the West Coast’s influence on design today,” said Yurman. The collection starts at $1,000 and goes up to $30,000.

DRESSED TO KILT: Designer Jeffrey Banks is not the only person in the industry crazy about tartan. At a party feting his new book, “Tartan: Romancing the Plaid,” Banks and co-author Doria de La Chapelle didn’t get up from the signing table for the entire two-hour duration of the event Monday night. Saks Fifth Avenue celebrated the tome on its second floor, amidst Burberry’s famous plaid offerings. Co-hosts Stephen I. Sadove and Diane von Furstenberg stood court among a crowd of plaid-wearing dandies.

BARRE NONE: The ballet world got a taste of rock ‘n’ roll Monday evening when Career Transitions for Dancers hosted “Dance Rocks,” presented by Rolex. The likes of Patricia Kennedy, Bebe Neuwirth and Christine Ebersole were on hand at City Center as ballerinas pirouetted and plieed to the musical stylings of Elvis Presley and James Brown. Between numbers, Ebersole lamented her two left feet. “I always wanted to be a dancer,” the actress told the crowd, “but that wasn’t in the cards for this lifetime.” Of course, evening honoree Neuwirth—whose Broadway credits include “Fosse” “Chicago” and “A Chorus Line”–could not make the same claim. “When I was born, the doctor told my mother, ‘she’s a dancer’,” the “Frasier” star said.