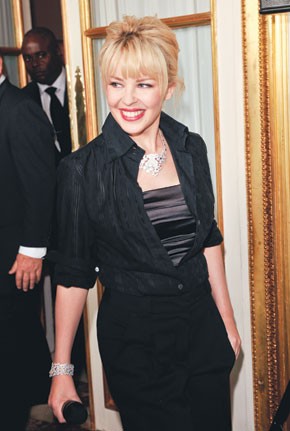 KYLIE LANDS IN PARIS: Warming up for the kickoff concert for her KylieX2008 European tour, Kylie Minogue had her Parisian fans spinning around on Monday. After being awarded a Chevalier dans l’Ordre des Arts et des Lettres (Knight of the Arts), the petite songstress was whisked to the Hotel de Crillon for the unveiling of her first campaign for the Spanish jewelry brand Tous. “Is anyone coming to my little show tomorrow? It’s not that big a deal,” joked the jittery star, whose mom and pop were in the crowd, joined by a gaggle of French actresses including Zoé Félix, Delphine Chanéac and Emilie Dequenne.

Chanéac, who’ll be heading to the Cannes Film Festival next week, sported a shaved head from her role in the upcoming sci-fi horror film “Splice,” starring Adrien Brody. “All I’ll say is that my character is part-animal, part-human with a tail,” said Chanéac.

As for Minogue’s onstage costumes by Jean Paul Gaultier, the designer describes them as very graphic, modern — and a bit surreal. “It’s quite spectacular. The show will be great,” said Gaultier, adding that Minogue requested certain styles from couture shows, including a purple “skeleton” dress from the winter 2006 collection. But everything was modified and customized to suit the show’s choreography and Minogue’s petite dimensions.

A “manga type of girl” — with a dash of Orthodox iconography — ranks as Gaultier’s favorite of the eight looks he created for the tour, which winds up in London in August.

LONG-HAUL FLIERS: Fashion stalwarts Marylou Luther and Bill Cunningham will have reason to celebrate during Paris’ next round of ready-to-wear shows in October. According to a spokesman for the city’s Chambre Syndicale, the pair will be awarded a Chevalier dans l’Ordre des Arts et des Lettres (Knight of the Arts) during the shows for their extensive coverage of the fashion industry — dating back to 1948 for Cunningham, whose vintage career path includes a stint at Women’s Wear Daily before moving to The New York Times, where he works as a photographer, and to 1958 for Luther, the longtime editor of The International Fashion Syndicate.

WHAT ABOUT BOB?: Bob Colacello is no stranger to parties. After all, the author certainly had his fair share last year, when he celebrated his 60th birthday and the publishing of his book, “Out.” But that didn’t stop Adam Lippes from throwing Colacello a party to celebrate the second printing of that book and his 61st birthday. “Everyone thinks that getting a book published is a big deal, but getting a second printing is a really big deal,” said Lippes in between attending to hosting duties on Saturday night. Gathered at his West Village pad was an intimate group, including Francisco Costa, Eva Lorenzotti, Marjorie Gubelmann and Coco Brandolini.

As the birthday boy reminisced about his days working for Andy Warhol, Valentino chimed in: “I went to visit the Factory and I remember I had to be careful where I stepped because there were paintings drying all over the floor,” he said, demonstrating how he would tiptoe around. “He did my portrait in 1974, but [back then] $15,000 or $20,000 was a lot of money for a painting. I had to pay millions for it later.”

BEFORE THE BIG NIGHT: Hours before the pomp and circumstance of Monday night’s Costume Institute Gala, Pete Nordstrom teamed up with Vogue’s Sally Singer for a decidedly more casual affair — a lunch in honor of 6267 designers Roberto Rimondi and Tommaso Aquilano at The Little Owl in Manhattan’s West Village neighborhood. Not surprisingly, guests discussed the day’s impending festivities. Byrdie Bell revealed that her entourage would include not one but two male escorts — Brian Atwood and his interior designer beau, Nate Berkus. “I am totally going to be third-wheeling it,” she said with a laugh.

ROCK ON: “Anglomania” may have been the theme (and exhibit) of the Met’s Costume Institute Gala two years ago, but Burberry still made its presence known last weekend when creative director Christopher Bailey and Another Man’s editor in chief, Jefferson Hack, hosted a private dinner Saturday night in honor of the magazine’s spring issue. Held, rather quixotically, at Midtown eatery Patroon, the event saw a mix of British and New York style-setters such as Agyness Deyn, model Rosie Huntington-Whiteley, Mario Testino, Cat Deeley, Will Young, Penn Badgley, William Moseley, Anouck Lepère, Julia Restoin Roitfeld and ubiquitous band The Virgins. And Burberry helped set the scene with a specially curated music mix of songs from Joy Division, The Clash and David Bowie.

AND THE WINNERS ARE: Pratt Institute College of Art and Design’s fashion department held its third annual Senior Evening and Bridal Competition last week at the Royalton Hotel in Manhattan. Sponsored by Cotton Inc., the event showcased the works of 12 graduating seniors who competed for three prizes. Their challenge was to each design a dress from 100 percent cotton fabric. The first-place winner, Jessie Voris from Fredon, N.J., took home $5,000 for her cream A-line gown. The second-place prize of $1,500 went to Adrianne Waite from Dallas, who created a green pleated drop-waist two-piece dress. Third prize went to Niki Marcheggiani, from Knoxville, Tenn., who won $1,000 for her purple strapless number. All of the designs will be presented in the school’s annual end-of-year fashion show on Wednesday at The Altman Building. The event will honor eveningwear designer Carmen Marc Valvo.