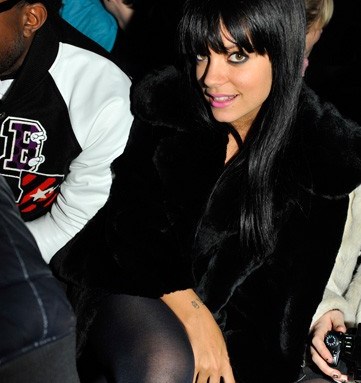 ME AND YOU: British pop star Lily Allen jetted into Paris to support Kim Jones, who staged his first runway show for men’s label Dunhill on Sunday night. Allen said she was gearing up for the worldwide launch of her second album “It’s Not Me, It’s You” in February.

STREET SCENE: Valentino’s new creative directors Maria Grazia Chiuri and Pier Paolo Piccioli are taking couture to a whole new level — the street. The duo plans broadcast their Paris debut tonight live to plasma screens in Valentino boutiques in Paris, Milan and Rome. Meanwhile, following speculation in Italy that Valentino Garavani was supervising the collection, the retired couturier issued a statement Tuesday to “categorically deny any contact” with Chiuri and Piccioli or “the collections they design.” Garavani said, “If I decide to attend the presentation of their collection, it will only be as a supporter of two people I love and who have been close to me for many years.”

TALENT SCOUT: Delphine Arnault, who sat front row at the Dior Homme show Sunday afternoon, also took in Gareth Pugh’s men’s wear debut later that night as men’s fashion week in Paris wound to a close. Arnault, who is deputy managing director at Christian Dior, said, “I am always interested in young designers.” While her presence set speculation brewing, a spokesman for Pugh assured, “There have been no discussions whatsoever with Dior or LVMH about any kind of design role.”

TAKING THE PLUNGE: Jimmy Jean-Louis, star of NBC’s “Heroes,” took in Christian Lacroix’s couture show on Tuesday and said he’s just started filming “Coursier” a French movie with EuropaCorp, Luc Besson’s company, in Paris this week. French actress Marie-Anne Chazel said she’s looking forward to the costumes for her role as an actress in the period made-for-TV movie “Les Mechantes” (Mean Girls). “It’s set in Napoleonic times, so the outfits will be very regal, with plunging dresses, lots of muslin,” she enthused.

Catherine Deneuve chirped along to a remixed version of Wham’s “Careless Whisper” during the show, and later said her forthcoming film “The Girl from the Subway” is out soon. Socialite Suzanne Saperstein has been a front-row fixture at couture, with her 18-year-old daughter, Stephanie, who was gleaning information from designers for her own collection, called Chiave. “I am regrouping and my mom and her friends are really helping. I had dinner with Stéphane Rolland, who was great with advice,” she said. While still in high school, Stephanie said she’s hoping to launch a few choice looks in spring, with 50 percent of profits destined for charity. “I am also trying to raise the awareness of drunk driving,” she said.

CLUB SANDWICH: Andre’s after-dark empire just keeps expanding. The pint-sized entrepreneur disclosed Monday night at the presentation for House of Waris that he’s taken over a hotel next to the Cafe Flore on the Left Bank of Paris. Vincent Darre will be behind the decor. “We’re going for an old Seventies vibe. It’s going to be really private, as there are only around four big rooms, as well as a small bar,” said Andre, adding that the bar should be up and running within three weeks.

WITH HONORS: On Monday, the Metropolitan Museum of Art honored designer Arthur McGee. Lesser known in wider fashion circles, McGee, who worked with Charles James as a student, became the first African-American to head a design studio on Seventh Avenue, at Bobbie Brooks in 1957. Jeffrey Banks, Bethann Hardison, André Leon Talley, Steven Kolb, B. Michael, Stephen Burrows, Thelma Golden and Susan Fales-Hill were just some in the glamorous crowd who came to tip their hats off to McGee at the luncheon. “I have been in this business a long time,” McGee, who was born in 1933 in Detroit, said. “Look at the room. Everybody’s here, from now and from years ago.”

The event was hosted by the Metropolitan Museum’s Thomas P. Campbell and Harold Koda, and Richard Baker, chairman of Lord & Taylor, where McGee once sold his clothes.

Koda was inspired to honor McGee when Aziza Braithwaite Bey approached him about a television documentary on defining style, with a commentary on African-American talent. “One of the bad things about fashion is that we are in a constant cycle and sometimes forget the past, so I thought we should recognize Arthur’s contributions.”

“This tribute is long overdue,” said actress Cicely Tyson, in her remarks about the designer.

The recognition may not end with the luncheon. “I once did a show with Richard Martin, and we used one of Arthur’s ballgowns made with mudcloth,” Koda said. “We can’t locate it anymore, and we are looking for it.”