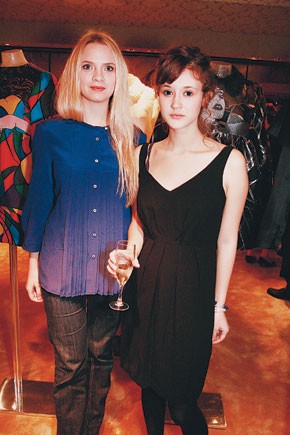 LUXURY LANDING: Peter Bacanovic has a new gig: chief executive officer of jeweler Fred Leighton. Martha Stewart’s former stockbroker has already started at Leighton, and his appointment is expected to be announced in the next few days. Bacanovic has been residing mostly in L.A. lately, and has been helping Leighton with devising a look for its new L.A. store. “Think less Peter Marino and more Rem Koolhaas,” he told WWD. His role at Leighton isn’t his first involvement in the fashion world — last year Bacanovic served as creative director for Judith Leiber’s ads.

BECKHAM BONANZA: The David Beckham for Armani campaign doesn’t launch in the U.K. until March, but already it’s causing a stir among London fans. Selfridges witnessed a 50 percent leap in sales of Armani white men’s briefs after the British press reported Beckham would be the new face, or rather body, of Emporio Armani underwear. Sales of the entire Emporio Armani underwear line rose on average by 30 percent across the range, the store said. “David Beckham is a global style icon, appealing equally to men and women. Where he goes, fashion is bound to follow,” said David Walker-Smith, menswear director at Selfridges. The briefs retail for £16, or $32.

COLD FRONT: It looks like Karl Lagerfeld will be “Russian” come next December. The designer, who showed Chanel’s latest “metiers d’art” collection in London last week, is eyeing the land of caviar and vodka for next year’s show. After all, house founder Gabrielle “Coco” Chanel famously showed a Russian collection in 1922, for one.

DIAMOND MAN: Who needs Santa when Graff comes to town? To usher in the holidays and high season, the British jeweler flew in two mega-necklaces totaling $15 million from London for its mid-December cocktail reception for Dana-Farber Cancer Institute’s 17th annual Discovery Ball next month. “In case anyone forgot, we wanted to show them who’s boss,” said president and chief executive officer Henri Barguirdjian in reference to a white diamond necklace sporting a 30-carat pink briolette and another featuring three strands laden with white diamonds and 1,000 (yes, that’s correct) carats of rubies. Guests including ball chairmen Michele and Howard Kessler, Bridget Koch, Petra Levin and Ellen Jaffe also were first to view the firm’s grand auction donation, a white gold and diamond bracelet retailing for $50,000. While Graff has had recent store openings in Tokyo and Hong Kong, as well as a shop-in-shop at Saks Fifth Avenue in Greenwich, Conn. — and a 5,600-square-foot flagship on Madison and 63rd Street in New York and a Geneva boutique are due in 2008 — Barguirdjian said Florida remains a focus. “So many of our New York and Chicago clients have second homes here, whether near our Palm Beach or Bal Harbour locations, so the market is very important during the season,” he said.

BELLA ROMA: Forget emperor’s busts and stone columns: Larry Gagosian is bringing a whiff of modernity to Rome with a new 8,000-square-foot art gallery that opens on Saturday and will be feted with a “vernissage,” followed by dinner for 400 at the newly refurbished Palazzo Barberini. Guests expected include a mix of artists and Roman socialites. The gallery’s first exhibition is devoted to Cy Twombly and the gallery’s curator is 35-year-old Pepi Marchetti Franchi, who previously worked at the Guggenheim in New York.

SING SONG: Ludivine Sagnier, Audrey Marnay, Sara Forestier and rising actress Constance Rousseau cooed over the dragonfly-embellished boots and ladybug brooches on display at Miu Miu’s Paris flagship Wednesday night as part of a preview of the brand’s spring collection. Actress Sagnier disclosed she’s been busy recording her first album. “All will be revealed by the ready-to-wear collections,” she said, adding she’s hoping to find a good book under her Christmas tree. Meanwhile, Forestier said she’ll be off to Israel this spring to start work on a movie by Haim Bouzaglo about the creation of Israel. “I’m to play a Polish Jew; it’s going to be quite a profound experience,” she mused.