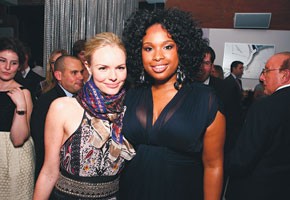 MARCIANO SPENDS BIG ON BLING: Forget contemporary art: Georges Marciano, one of the founders of the Guess brand along with his brothers Paul and Maurice, is sinking his money into cold, hard stones. Marciano, who is no longer involved in Guess, plunked down $16.2 million to buy the world’s largest and purest brilliant-cut diamond ever sold at auction. Auctioned by Sotheby’s in Geneva, the selling price was the second highest ever for a diamond at auction. At 84.37 carats, Marciano paid $191,980 a carat, the highest price ever paid per carat for a white diamond. Marciano has named the diamond the “Chloe Diamond,” presumably after his daughter Chloe. No word on what Marciano plans to do with the hunk of ice, though. He didn’t return calls for comment Wednesday.

SITTING STILL: Heath Ledger did something on Tuesday night most actors never do: sit through a screening of their own movie. The Aussie star watched himself on screen playing a version of Bob Dylan in Todd Haynes’ “I’m Not There,” out from the Weinstein Co. on Nov. 21. The nonlinear biopic, which also stars Cate Blanchett, Richard Gere and Christian Bale as other characters inspired by Dylan, required immense concentration from audience members, but Elle Macpherson, for one, enjoyed it. “I love Dylan,” she said at the Hogan and Cinema Society-hosted after party at the Bowery Hotel (which, unlike the screening, was packed). The model is in town until Friday and took time from meetings to screen an episode of “America’s Next Top Model,” hosted by fellow modeling vet Tyra Banks. Meanwhile, as Julianne Moore and husband Bart Freundlich sat in a side room, Lauren Bacall did the rounds and “Entourage” star Adrian Grenier eagerly chatted up female fans, someone decided to invoke the Dylan era by lighting up a joint.

HITTING A HIGH NOTE: Vacheron Constantin feted Clive Davis Tuesday night at a party at Xchange in New York, which also celebrated the 252-year-old firm’s new Platinum Excellence Collection. Davis, who brought “Dreamgirl” Oscar winner Jennifer Hudson, has a soft spot in his heart for the Swiss watch brand. “I went to school on scholarship and had to work from the bottom up,” Davis said. “I had no possessions, other than getting engaged and receiving a Vacheron watch from my in-laws. That watch was the proudest possession I ever had.”

Davis then gave the stage over to Hudson — sheathed in a revealing black Diane von Furstenberg number and diamond pavé Vacheron watch — who unleashed her pipes to an eager audience. Also in attendance was Etro-clad Kate Bosworth, who is busy working on a film in New Zealand with Geoffrey Rush. “It’s set in the Wild West, so I get to wear all the fun stuff like riding chaps and whatnot,” she said.

ROCKS AROUND THE CLOCK: Thandie Newton, Tom Dixon, Roksanda Ilincic, Bella Freud and other friends and fans of Solange Azagury-Partridge sipped Dom Pérignon and grazed on foie gras and potted crab at a party Tuesday evening to mark the jewelry designer’s double-header launch. Guests gathered at Azagury-Partridge’s bijou boutique in London on Westbourne Grove for the unveiling of Platonic, a diamond jewelry collection, and a new fragrance called Cosmic. “Solange is very good at maximizing the luxury at the heart of everything,” said Freud, as pieces from the jewelry collection twinkled in the background. The jewels are made from diamonds — rough, smooth, black, gray and white — and Azagury-Partridge calls them “planet-inspired.” There’s even a smooth, diamond bead necklace that looks like a string of pearls. “That’s a real stealth-wealth item,” she said.

THE WINNER: In the wake of the official celebrations in July with a ballet at La Scala, Milan is now commemorating the 10th anniversary of Gianni Versace’s death with an event aimed at supporting young and talented fashion students. The municipality in the person of town councilor for special activities Tiziana Maiolo, together with Milan’s IED (European Design Institute) will for the first time assign an annual scholarship to allow students to attend the three-year, post-diploma course of Fashion and Textile Design at IED Moda Lab. Students participating submitted 10 sketches, summing up and interpreting Versace’s genius and style, and the iconographical materials that inspired them, to a jury composed of Donatella Versace, Franca Sozzani and Maiolo. The wannabe designers focused on Versace’s various interests other than fashion — paintings, sculpture, theater and music. On Thursday, Maiolo, Andrea Batilla, headmaster of IED Moda Lab, and Mario Boselli, head of the Italian Chamber of Fashion, presented the winner: 19-year-old Michele Guglielmo, who also gets to intern at Versace at the end of the course.

BELLE DU JOUR: Actress Lisa Rinna is expanding her original Belle Gray boutique in Sherman Oaks, Calif., by 1,600 square feet and celebrating with a party with guests such as Tori Spelling (whose jewelry line, Maven, sells in the store) and Denise Richards. Other celeb-designed lines Belle Gray is adding are Elizabeth and James, Lauren Conrad and William Rast. The expanded space, designed and built by Rinna’s husband, Harry Hamlin, also includes a shoe parlor with local lines that have branched into footwear such as Mike & Chris and Joie, as well as Tory Burch, Kors and Frye. Rinna, who also has a Belle Gray boutique in the Rick Caruso-owned Calabasas Commons shopping center, also in the San Fernando Valley, is planning a third store in Summerlin, Nev., to open next year.