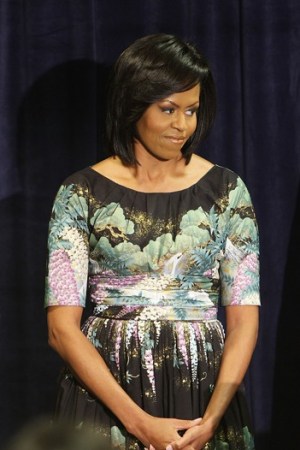 DOUBLING UP: In true recessionary fashion, Michelle Obama proves that clothing is anything but disposable. The First Lady donned the same floral Tracy Feith dress she was much photographed wearing in January as she was seen exiting the U.S. Mission to the United Nations on 44th Street in Manhattan on Tuesday.

Roughly 200 people gathered to catch a glimpse of Obama in the late afternoon, after rumors spread that she was going to be there. When she finally emerged, a wave of applause erupted from the impromptu group of onlookers. Earlier in the day, Obama gave a speech to employees of the U.S. Mission and on Tuesday night she was scheduled to speak at Time Magazine’s celebration of the 100 Most Influential People of the Year.

FILM RELIC: Suspenseful, sure. Action packed, definitely. But a fashion movie, “Angels & Demons” is not. That didn’t stop Damiani Group vice president Silvia Damiani from injecting a dose of glamour, courtesy of the 85-year-old Italian jewelry brand. Damiani partnered with costume designer Daniel Orlandi to create the jewelry for the Tom Hanks-starring film, based on the Dan Brown novel.

Damiani created a special collection of crosses and rosary beads for the characters, including Vittoria Vetra, the part played by actress Ayelet Zurer. Damiani is launching a collection inspired by its work for the film of crosses and rosary beads made using gold, diamonds, onyx and black enamel at the Couture trade show in Las Vegas at the end of the month. Retail prices for the line, also dubbed Angels & Demons, will retail from $3,440 to $8,540.

TRACEY TAKES ON: Tracey Ullman has already lampooned Miuccia Prada and Donna Karan on her Showtime series “State of the Union.” Next month, she will get a chance to rib an entire room of fashion folks. Ullman will host the 2009 CFDA Fashion Awards, which will take place at Alice Tully Hall on June 15. The comedienne is a longtime friend of CFDA president Diane von Furstenberg.

Meanwhile, Scott Pask, who was just nominated for a Tony Award for “Pal Joey,” will create the set, which will feature a Swarovski crystal podium. The Austrian crystal maker is the evening’s sponsor for the eighth year. Other changes this year include the dinner. Where once the awards were marked by a lengthy seated dinner, this year’s affair will feature a light, passed supper. “We are looking forward to this change in venue and format which will allow us to have a fun party for the winners, nominees, honorees, and guests in the beautiful glass-enclosed atrium of Alice Tully Hall,” von Furstenberg said.

EXPANDING THE PIPELINE: With Internet sales among the only bright spots in retailing, Gap Inc. is building up the offering on its Piperlime Web site. Piperlime currently sells shoes and handbags, but for next fall has decided to add apparel to the mix. Gap Inc. won’t disclose details of the apparel or what labels will be offered until Thursday, when Piperlime holds an editor’s preview in New York. Currently, Piperlime sells labels including Lily Pulitzer, Marc by Marc Jacobs and Nine West in handbags, and Adidas, New Balance and Patagonia in shoes. Piperlime also sells the Gap-owned Athleta brand for swimwear, yogawear and beach and sport dresses.

BEIJING LOVES BURBERRY: Burberry’s creative director Christopher Bailey caused a commotion on the streets of China’s capital last Thursday night as he opened the brand’s newest venture — a two-story flagship in the heart of Beijing’s downtown. Accompanied by Hong Kong actress Maggie Cheung, the pair posed for cameras on a white carpet before heading inside to mingle with more than 300 guests. “I love Beijing, it’s just got such a buzz,” Bailey said enthusiastically, adding that he hadn’t had much time for sightseeing this time around. “I went to the art district today; I didn’t have enough time there but I loved it. In fact I never have enough time anywhere,” he lamented.

Meanwhile, Cheung chatted happily to friends and guests, all the while clutching the arm of her beau, OMA architect Ole Scheeren.

“I’m wearing Prada tonight,” she said, before admitting otherwise. “No I’m just having you on — of course it’s Burberry. It’s a gold Burberry cape from two years ago. Christopher gave it to me and this is the first time I have worn it out.”

Film star Jackie Chan also put in an appearance at the event. Conspicuous in a white North Face tracksuit and dark glasses, he took a particular interest in the handbags before disappearing into the balmy night.

GOLDEN BOY: It seems “Twilight” star Robert Pattinson’s dental interests extend beyond his vampiric film role. At a recent photo shoot in Los Angeles, the actor was taken by the Finn jewelry pavé diamond shark’s tooth necklace stylist Deb Watson was sporting. Luckily, she had brought an 18-karat gold version on a leather cord for him to wear. At the day’s end, he was so attached, he asked to buy it. Pattinson is in good company: both Liev Schreiber and Brad Pitt own the same necklace.