Katie Holmes has been a fan of Roger Vivier for the past few years, wearing the firm's signature sunglasses, shoes and evening clutches to myriad events. 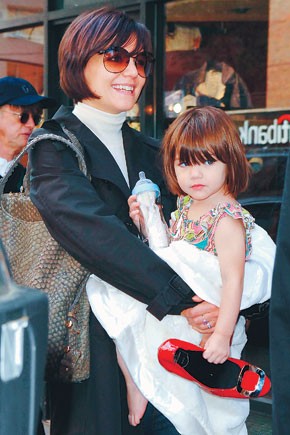 MOTHER KNOWS BEST: Katie Holmes has been a fan of Roger Vivier for the past few years, wearing the firm’s signature sunglasses, shoes and evening clutches to myriad events. Now her daughter, Suri Cruise, is getting in on the action. Cruise, who exhibited her own fashion sense when she picked out a pair of red flats for her mom at the Madison Avenue Vivier store on Monday after lunching at La Goulue, and later that day by choosing her mom’s — obviously hard-to-walk-in — blue pumps for the Met gala, will be the first child ever to have custom-made Vivier shoes. The brand’s creative director, Bruno Frisoni, is creating a special pair of shoes to the child’s liking. What’s next for the little tyke — couture?

NOT SO FAST: Sources said talks between representatives of Renzo Rosso of Diesel and Hedi Slimane took place as recently as this past weekend, but Slimane’s people insist no deal has been made — and may never be. Following reports Slimane may be tapped to design Diesel’s new Red Collection, one of his representatives told WWD that the former Dior Homme creative director has “no interest at all in Renzo Rosso’s group, let alone Diesel.”

This story first appeared in the May 7, 2008 issue of WWD. Subscribe Today.

CAHIERS DU CINEMA: Agnès b. designer Agnès Troublé is no stranger to age discrimination. Introducing Jean-Luc Godard’s “Breathless” at the Film Forum in Manhattan last Friday night, she reported that when the film opened in 1960, “I couldn’t enter the cinema because [they thought] I was under 18,” and the film was deemed too “subversive” for the younger set. Laughing, the designer added, “I showed them pictures of the twins I had just had and they let me in. I was 19.” Post-screening, Troublé demurred when asked for her favorite of the auteur’s flicks, adding, “I’ve always loved the vision Godard has [of] women. I did some clothes thinking of Anna Karina this season.” But the designer’s more than just a cinema buff: she has two film production companies, Love Streams and O’Salvation. “We just produced Harmony Korine’s ‘Mister Lonely.’ I’m a great fan of Harmony’s,” she said. In addition to executive producing the film, which played at the Tribeca Film Festival this weekend, she whipped up a “Seven Year Itch”-style white halter dress for “Marilyn Monroe,” Samantha Morton’s character. It is now on display in the window of her SoHo store.

FURNITURE FOR A CAUSE: Realize you had all winter to buy a sofa for the house in the Hamptons and still you managed to forget? Well, on Thursday you can pick one up, meet Maggie Gyllenhaal, get design advice from Real Simple’s Kristin van Ogtrop and help homeless people with AIDS at the annual Housing Works “Design on a Dime Benefit 2008,” which this year features discounted furniture from Thom Filicia, Charlotte Moss, Jamie Drake, Sharon Simonaire and Sills Huniford, whose founder James Huniford is cohosting. Held at the Metropolitan Pavilion on West 18th Street, there’ll also be a silent auction of photography by Herb Ritts, Pamela Hanson and Tierney Gearon.

SCOTTO SPIRIT: “When you think about Rosanna, you smile. She’s the girlfriend everyone should have in their lives,” said TV producer Amy Rosenblum, who presented the Spirit of Life award to Fox 5 News anchor Rosanna Scotto last Thursday at the City of Hope Spirit of Life award luncheon at the Waldorf Astoria. Rosenblum described Scotto as a terrific “family girl” who can often be found schmoozing with diners at her family’s restaurant, Fresco by Scotto on East 52nd Street. The luncheon, sponsored by the East End Chapter/Jeanne Kaye League also honored realtor I. Dolly Lenz, vice chairman of Prudential Douglas Elliman, and featured a runway presentation of Pamela Dennis’ made-to-measure eveningwear. The event raised over $400,000, about $55,000 more than last year.

BABY MAMA: Bergdorf Goodman will have to wait. Saks and Neiman’s will too. Nancy Gonzalez’s resort collection will be ready a bit late this year. The reason for the delay? The designer is about to become a grandmother. The Cali, Colombia-based designer’s daughter, Cristina Barberi Gonzalez, is expecting her first child in June, and Gonzalez has been busy jetting between her daughter’s home in Los Angeles and hers in Cali in preparations for the baby. “Family comes before resort,” mused the accessories brand’s president, Santiago Barberi Gonzalez. “We are a family owned brand. They will have to wait.” The collection will be ready to peruse on June 16.

WEB DESIGNER: Google users can now double-click in style — against a background of Dolce & Gabbana’s signature leopard pattern or swatches of Tory Burch’s trademark geometric prints. These fashion-forward wallpaper settings — available on iGoogle (a service that allows users to personalize their Google home pages) — are two of the almost 70 celebrity-designed options launched by the search engine. Many of fashion’s own joined Jeff Koons and Lance Armstrong, including Diane von Furstenberg, who contributed a floral print from her spring 2007 collection, and Oscar de la Renta, who offered an ikat from his fall 2005 show.

CHRISTINA COMES OUT: Christina Aguilera is coming out for her man. The songstress will do her first post-baby performance on May 31 at the launch party for British jeweler Stephen Webster’s silver collection. The party will take place at Pure in Las Vegas during the jewelry trade show, Couture. Aguilera’s husband, Jordan Bratman, is said to be a board member of Stephen Webster, which is owned by a newly formed holding company related to Ron Burkle’s Yucaipa Cos. Garrard is owned by the same company.

TOPSHOP SIGNS SCUTT: Young London designer Danielle Scutt’s rockabilly-meets-Helmut Newton ready-to-wear collections are usually found hanging on the rails of edgy boutiques. But the designer is set to reach a wider audience come June, when she unveils a capsule collection for Topshop. The 10-piece line will include Scutt’s signature spray-on, high-waisted denim skirt and cotton bodysuit in a tiger print, alongside more everyday pieces such as skinny jeans and miniskirts. “The collection focuses on classic, key denim features mixed with prints of iconically aggressive animals on effortless silhouettes,” said Scutt.

Prices will range from 28 pounds, or $55 at current exchange, for a cotton jersey bodysuit, to 75 pounds, or $148, for a denim jacket. The collection will be sold in the higher-end Boutique areas of selected Topshop stores across the U.K., and via Topshop’s online store.

HALCYON HEIDI: Heidi Klum likes to sparkle. Spotting the tiny rhinestone decorating her place-setting card at Wednesday’s dinner that Jordache threw in her honor at the Chateau Marmont, she was inspired to add a tiny diamond to the pockets of the high-end jeans she’s designing for the brand. “You can get diamonds cheap,” the model-turned-“Project Runway”-host-turned designer said to Jordache executives Shaul Nakash and Liz Berlinger. Also attending the candlelit alfresco dinner were vacationing New Yorker Marielle Safra, stylist Rachel Zoe and models Mini Anden, Erin Wasson and Marissa Miller. Shimmering in a sequin tank and skinny jeans from the Heidi Klum by Jordache line, Klum had fully recovered from drenching herself in various forms of water — shower, bathtub and swimming pool — for the label’s new fall ad campaign, shot on Tuesday by photographer Rankin. Aware of the importance of image, Klum took the lead in casting the six backup models and concocting the ad’s wet theme, whose underlying message was that she likes her Jordache garments so much that she doesn’t want to take them off. But she also wanted to market a new look. “I didn’t want to focus on the big hair,” Klum said. “I just wanted it to be more real in a way, but not too recognizable in the way I look.”

WHY I WORE LIPSTICK TO CARMEN MARC VALVO’S SHOW: Geralyn Lucas, the breast cancer survivor who wrote “Why I Wore Lipstick to My Mastectomy,” wore Chanel Red Dream lipstick to speak to almost 500 women at last Wednesday’s 2008 Breast Service Luncheon at the Pierre Hotel, where Carmen Marc Valvo also showed his fall collection. Lucas added that she also wore Spanx — to suck herself into her black suit (the top of which was Elie Tahari) — and the Giuseppe Zanottis that she wore to the Emmys, where the Lifetime Original Movie version of her book was nominated. When Lucas had gone through breast cancer a decade earlier, she’d been treated by Dr. Alison Estabrook, who was honored at the luncheon for Beth Israel Medical Center and St. Luke’s and Roosevelt Hospitals. “Had I not seen Dr. Estabrook, the title of my book would have been ‘Why I Wore Lipstick to My Lumpectomy,'” Lucas said. Valvo, a colon cancer survivor, donated a dress to be auctioned at the benefit, which raised about $700,000.