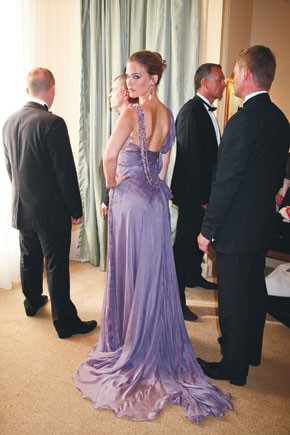 ON THE CROISSETTE: Stars attending the opening ceremony of the Cannes International Film Festival Wednesday night sure didn’t let the downbeat story line of headlining film “Blindness” stop them from dressing up. Especially the leading lady, Julianne Moore, who swept into the auditorium wearing a champagne-hued Christian Lacroix gown, dramatically winged with black-and-yellow feathered shoulders. Yellow diamonds from Chopard finished off the look.

Speaking of Ferretti, the designer and Chopard’s Caroline Gruosi-Scheufele — who codesigned the gem-laden dress that Bar Refaeli wore to the festival opening — are already plotting future collaborations. Aboard Ferretti’s yacht for a private preview of the $700,000 gown, made from lilac silk chiffon and adorned with 2,904 carats worth of gems, the pair revealed plans to next design a timepiece together. “Like the dress, it would be about combining two different approaches, one a little more technical, one a little more fashion,” said Ferretti, adding that the watch, likely to be a one-off, would be unveiled at the Venice Film Festival in 2009. Also along for the boat ride, Refaeli, who has just wrapped up shooting campaigns for True Religion, Accessorize and Chanel Make Up, disclosed she’s looking forward to the release of her first movie, “Session,” a psychological thriller in which she plays the lead. Marking her second time in Cannes, the Israeli star said she’d overpacked for the occasion, despite having access to the world’s most glamorous gowns. “I’ve packed mainly whites and florals, as I’ve spent the last few months in New York, which was dark and cold, and florals are very big this season,” she said.

The Ferretti/Chopard gown, meanwhile, is next headed to be auctioned at the amfAR gala, where it will be modeled by Eva Herzigova.

MCQUEEN’S L.A. MOMENT: Alexander McQueen jetted in to Los Angeles for a one-night-only engagement at his new Melrose Avenue store. To be sure, it wasn’t a typical store-opening party. There were hordes of people, yes, but in true McQueen fashion, the crowd ranged from Vidal and Ronnie Sassoon to Janet Jackson to Lisa Eisner. Most people — including Elizabeth Banks, Joy Bryant, Eve, Jamie Tisch, Elizabeth Callender, Anthony Kiedis and Tony Alva — only took a cursory glance at the ultramodern store, then headed out the back door to the parking lot, which was done up in a red-and-black Asian theme complete with hanging lanterns and mirrored pillars and bars. Jackson quietly took in the action at a round booth on risers in the back, dressed head to toe in red McQueen, and maintained a low profile. “His was the first fashion show I ever went to, more than 10 years ago, and it was just amazing,” said Jackson, who is rehearsing for her upcoming tour. “Until now, we hadn’t stayed in touch, but I love his clothes and think he’s so talented.”

McQueen then climbed up on a giant stage to introduce his “new friends,” the punk-soul band The Gossip. “She’s going to look fierce tonight,” he said of the red sequin pantsuit he designed for curvaceous lead singer Beth Ditto. Apart from “people watching at the Chateau [Marmont],” McQueen didn’t have time to do much else in L.A. “I’ve got collections to design,” he said.